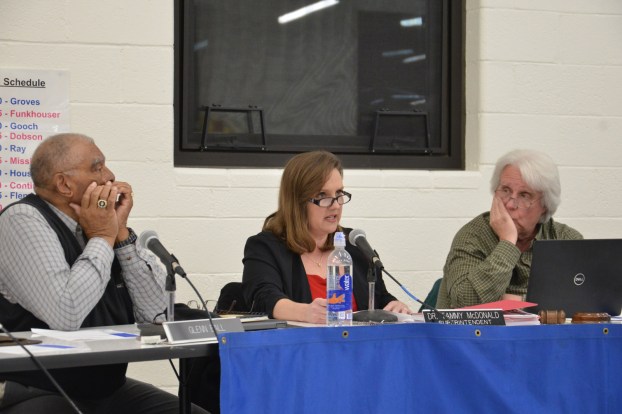 Representatives from the Danville Board of Education and Wilderness Trace Child Development Center, along with their respective attorneys, agreed to meet next week “to have an honest discussion of what’s going on,” before the school board decides whether or not to remain the center’s fiscal agent.

At a special called meeting Wednesday night, school board members heard comments and presentations from WTCDC Board Chair Mary Covell and Danville Superintendent Dr. Tammy McDonald. The board ultimately voted to table the issue until its next working session on March 9, so that the two sides can meet one or two days next week to discuss issues and concerns about the existing memorandum of agreement, or extend the time frame so that WTCDC may be able to find another entity to serve as its fiscal agent.

In her presentation, McDonald said there were several reasons why it was not in the best interest of Danville Schools to continue as Wilderness Trace’s fiscal agent — a role it has held for the past 26 years. She said the center is a non-profit agency and isn’t a public school located within the district; there is a history of late reimbursement payments and late and incorrect time sheets submissions from the center; the 2% administration fee the center pays is only a fraction of what it actually costs the district; there are concerns about food delivery to the center; and there is a conflict in supporting a school which students from other districts attend.

She also said the newly renovated Hogsett Primary School would be a better option for Danville preschoolers with disabilities, rather than having the district pay more than $41,000 this year to send seven students to WTCDC.

Covell said Danville Schools is “not a funding source” for the center, which receives money through grants, fundraisers and school contracts. Because the center receives its funding intermittently, “a monthly payroll proves to be difficult. And for that reason we have the current reimbursement strategy.”

Wilderness Trace’s teachers are employed by the Danville Independent School District, and Wilderness Trace reimburses Danville the cost of their salaries twice a year. The center is supposed to reimburse the school district within 30 days of receiving an invoice, according to its contract.

Covell said the center publicly acknowledges making a request for a 60-day extension to complete a payment during the last fiscal year.

The memorandum of agreement relationship also allows the teachers to participate in the school district’s retirement and health insurance plans — something that the small center would not be able to afford on its own, she added.

The center “provides quality preschool opportunity for any child, but uniquely, (to) children who do not thrive in traditional preschool environments,” she said.

“We recognize that there are evolving demands of all of us,” Covell said. “Things have changed since the inception of this relationship and we are open to a discussion for our future that serves the best interest of all parties involved, and something the community can be proud of.”

After the presentations, board member Lori Finke said, “If this relationship isn’t working, I hope we can find one that would work for both schools,” then the crowd erupted in applause.

She also asked if the fiscal agent had to be a school district, if all the center needed was a way to obtain more affordable health insurance and retirement benefits.

McDonald said, “That’s a question for Wilderness Trace, because if the main purpose is to get health insurance benefits, I would assume any agency — the City of Danville supports them financially as well —” could take over the fiscal agent responsibility. 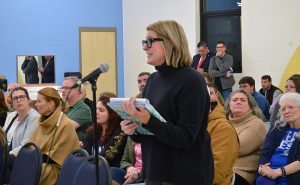 Wilderness Trace Executive Director Libby Suttles asked the board if she was permitted to ask any questions, and Becker answered no.

“This is a discussion” between board members, he said.

Assistant Director Tonia Darnell spoke up and said they wanted to answer and ask questions at the work session earlier this month, but they weren’t allowed to then, either.

Becker replied, “Thank you for your comments. I really don’t expect any more outbursts from the crowd. If we do, I’ll ask to adjourn this meeting.”

Just a few minutes later, board member Paul Smiley made the motion to not renew the MOA with Wilderness Trace.

“I know many of you are probably very upset with me that I made that motion,” he said.

He also said he was in favor of the recent increase in property taxes for the school.

Smiley added he believes Wilderness Trace will be able to find another fiscal agent. “I truly wish you the best. I want the best for your children.”

Board member Glenn Ball seconded the motion to not renew the MOA. He said the school district was small and had received less government funding in the past four or five years.

“The decisions that are made are not popular, but they’re the best for our schools,” Ball said.

Finke said with all of the information that the board received from Wilderness Trace and from the Danville superintendent, she wasn’t ready to make a decision.

Voting against the motion were Finke, Troy McCowan and Becker.

Finke later made a motion that the board table the discussion until its next meeting on March 9, so that the board and Wilderness Trace could have time to meet and discuss both of their issues and concerns, and perhaps come up with a mutually beneficial plan, which was passed unanimously.

Afterward, Becker spoke directly to Suttles and Darnell and said he had put in an open records request for the center’s financial records and audits for the past five years, but as of Wednesday night, haven’t received them. 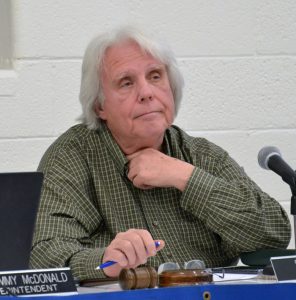 “We’re not trying to do harm or seek harm,” he said. “It was trying to find out what exactly your all’s financials are.”

He added, “For us to know your financial situation goes well beyond what we’ve been doing for 30 years, which is hoping and praying that you would pay us — and you have. Now I’m not saying that won’t continue, but we now need to have the confidence that that would continue … because as a board, I can not make a truly informed decision without that information.

“We’re being as transparent as we possibly can, and we also expect that from you guys. … because we need to know the whole Wilderness Trace. We need to know where your financial footings are. And we need to know that almost $300,000 a year, that we basically lend to you and pay back in basically two payments, we need to make sure that will continue and that we have confidence in that because the only loser in this is not you guys. … If you all cannot make those $300,000 commitments, this school district is on the hook.”

For four years now, Danville’s Scarlet Cup Theater has put on unique performances in unique places that were... read more