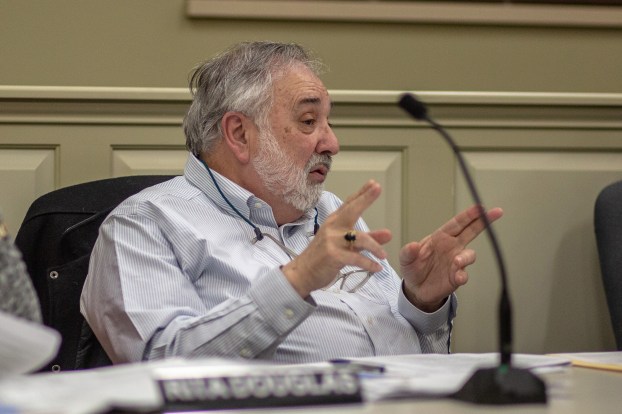 P&Z Commissioner Vince DiMartino makes a statement during a public hearing on a zone change for a condominium development Wednesday. (Photo by Ben Kleppinger)

The Danville-Boyle County Planning and Zoning Commission voted in favor of a zone change that would allow for denser residential development on 4.2 acres off of Baughman and Franklin avenues.

The biggest change of plans since last month’s FLUM amendment was that the City of Danville has now required that the development of up to 35 homes have access points on both Baughman and Franklin, said Steve Hunter, P&Z director. A previous conceptual plan showed a road being added at the end of Franklin Avenue dead-ending in a cul de sac; the new conceptual plan presented Wednesday showed an L-shaped road connecting the end of Franklin back to Baughman Avenue.

Hunter said in January that direct access to Baughman had been avoided because of a sinkhole in the area where the road would have to come through; the sinkhole issue was not discussed Wednesday.

Hunter praised Carter for agreeing to 10 different development conditions before the zone-change request came before the P&Z board.

“We were glad to see that we got 10 solid conditions that sort of set the framework for what would happen,” Hunter said.

After some modifications agreed to on Wednesday, the conditions include: 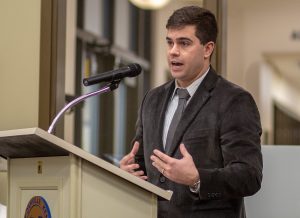 Developer Wesley Carter explains his plans for a condominium development in Danville to the Danville-Boyle County Planning and Zoning Commission on Wednesday. (Photo by Ben Kleppinger)

Carter has said he wants to build the homes so they cost less than $150,000 each because there is a lack of affordable housing in the area. He said Wednesday the economics of developing this particular piece of land also require a higher density of units than what is allowed in Danville’s single-family, large-lot residential zone.

“These are 4.218 acres that haven’t been developed — ever. There’s a reason,” he said. “The economics are tough. To get the math to work, it has to be a pretty precise pathway.”

One person spoke against the zone change during Wednesday’s public hearing — Charles Hinkle, a neighbor who lives on Franklin Avenue. Hinkle expressed concerns about additional traffic on Franklin, which is too narrow to allow most vehicles to pass each other.

“Yesterday, I couldn’t get down Franklin Avenue because there was a UPS truck … is his street going to be the same way?” Hinkle asked. He said even if the new development’s roads are wider, much of the traffic will still flow out onto Franklin. 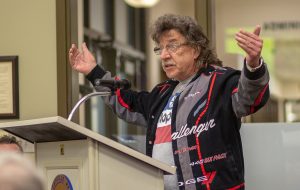 Franklin Avenue resident Charles Hinkle tells P&Z commissioners he is concerned that a condominium development that would connect to the end of the road he lives on would create traffic problems. (Photo by Ben Kleppinger)

“No matter what happens, Franklin Avenue is going to be a main thoroughfare in and out of there,” he said. “… You’ll have to pull over in somebody’s front yard to get by.”

Carter said the road in his development will be 18 feet wide on the Franklin end, but the City of Danville asked for it to narrow to 12 feet wide at the Baughman end — perhaps to encourage traffic to flow out but not in at that intersection.

P&Z Commissioner Vince DiMartino had similar concerns about narrow roads. He said he lives on a narrow road and understands how that can be an annoyance, but also how it could create a problem for emergency vehicles. He also wondered about what the new development would do to traffic flow in the area, including down Baughman and onto a four-lane highway, Hustonville Road.

“I like to go to Sonic and get peanut butter milkshakes,” said DiMartino, naming the restaurant at the intersection of Baughman and Hustonville Road. “I can’t pull out of there now. That means the light will have to change.”

But DiMartino said he liked Carter’s project; he just wanted good answers about the impact on traffic. He said he didn’t want to green-light developments without considering the bigger picture, for fear of creating traffic problems like Lexington did with Man O’ War Boulevard.

“I’m not worried about the project, so much as I am about it’s impact on … the larger community,” he said.

Hunter and Carter pointed out the new road as it is proposed now is what the City of Danville told Carter it wanted; the city did not want Carter to pursue widening Franklin, and it asked for the road to be narrowed to 12 feet wide at the Baughman intersection.

Carter said some of DiMartino’s concerns were with “variables” well outside of anyone’s control.

“We can’t control traffic on Hustonville Road even if we wanted to,” he said. “… Some of your remarks — they’re simply not corollary in a manner in which we can control.”

Carter said he also took issue with the suggestion that his development was somehow reducing access, when it would create an additional way out for Franklin Avenue, which is currently a dead-end street.

P&Z Commissioner Jim Boyd made the motion to recommend approval for the zone change.

“I think it’s an unfair comparison, Mr. DiMartino, between Man O’ War traffic in Lexington and your wait time for a milkshake at Sonic,” he said, getting a few chuckles from the audience. “I therefore make a motion to approve the proposed zoning map amendment …”

The motion passed unanimously, with DiMartino voting in favor.