Public art to be focus of workshop over Danville design guidelines 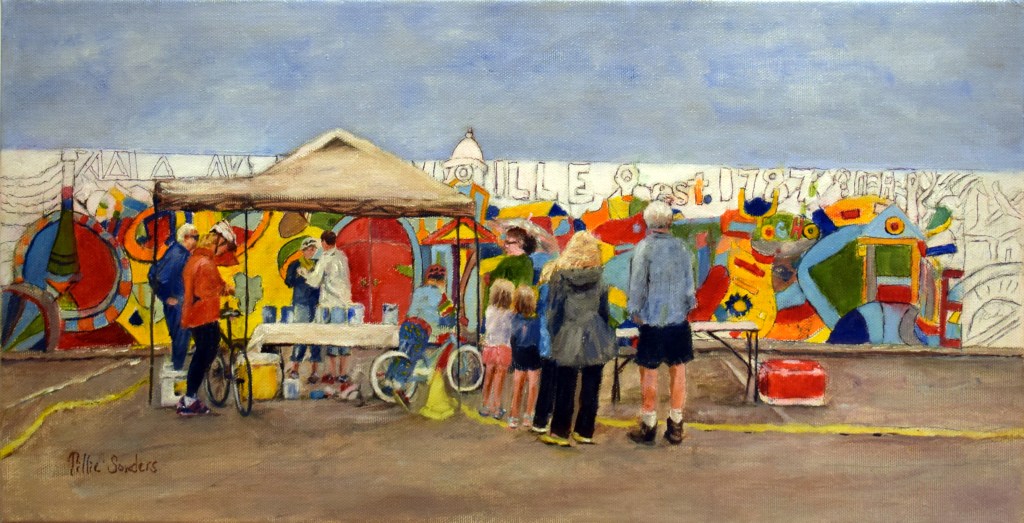 A painting, by local artist Tillie Sowders, shows the painting of the Third Street mural in process.

After Danville City Commission overturned two rejections of public murals by its Architectural Heritage Board in recent months, a joint meeting of the two bodies is now planned for Tuesday, focusing on public art guidelines.

Monday, during the city commission’s regular meeting, Preservation Coordinator Joni House gave an update on AHB’s yearly activity — a legal requirement for its Certified Local Government (CLG) certification. She impressed upon the city commission the need for a revision of the design guidelines, specifically “to deal with the historic district and public art within it, which has been some issue here recently.”

The report delivered covers the period of Oct. 1, 2018, through Sept. 30, 2019. House said in that timeframe, the AHB considered applications for seven Certificates of Appropriateness (COAs), all of which were approved. Staff approved 11 COAs, which she said “were in accordance with the guidelines set forth in the Historic Overlay District Design Guidelines.”

She said reports on each approved COA were presented during the regular AHB meetings, and no COAs were denied during the period.

No new local landmarks were designated during the timeframe, but there were two National Register listings added — the McGrorty Avene-Old Wilderness Road Historic District, listed in March, and the Thomas Barbee House on East Walnut, listed in June.

House said AHB’s “biggest accomplishment” was the training completed by board members, which she called a vast improvement. The majority of that training was done through local workshops funded by a grant through CLG. Trainings were completed on a historic window workshop, preservation basics, National Register basics and how to develop downtown walking tours, for example.

The report says all but one member completed the minimum requirements.

House says the report contains “several specific examples of how Danville’s Certified Local Government Program is meeting the duties of our agreement.” She cited the addition of the McGrorty Avenue National Register District as serving “to illustrate” the AHB’s “commitment to expand Danville’s historic districts and better identify the diversity that created our community.”

In January, she said the AHB adopted some goals; the most noted one is public education sessions soon to be offered on public art.

“I think we’ve got a good handle on that. I’ve met with the city attorney and a lot of folks, we will be starting that quite quickly,” House said. “You’ll be hearing from your city manager very soon about getting together for a meeting on that. We want to address the re-doing of our design guidelines, specifically section 6.3.3 for public art … That will be coming to your all’s full attention very soon.” The sessions will result in the restructuring of the current guidelines, she said.

Other goals identified by the AHB within the report include to:

“We had a great year, everything worked smoothly,” House said.

House said the AHB is working on some public and preservation planning for the historic districts within the commercial zones downtown. She said the Lexington-Broadway National Register District has more than 100 structures which had not been surveyed for National Register status.

House said it’s necessary to resurvey the district in order to provide data for preservation planning, which will include the treatment of the structures, specifically dealing with planning for public art. The total cost of the project is estimated at $10,300, which will provide for a survey consultant, and train volunteers and staff on accurate survey collection.

The cash contribution required from the city is $1,320, “with staff and in-kind contributions of $2,800,” House said, with the federal matching share at $6,180. She said overall, it’s a good price for what is needed.

“If you look at the Lexington-Broadway District as it is now, it’s a very distinct piano-key pattern, because there’s a lot of things that are not surveyed there. This may well lead us into being able to expand that district, as well.”

Commissioner J.H. Atkins made the motion to approve the city’s contribution, with Kevin Caudill seconding. The CLG grant application was unanimously approved by the commission.

The Danville City Commission will hold a joint meeting and workshop with the Architectural Heritage Board 9:30 a.m. Tuesday, March 3, at city hall in the public meeting room, which is open to the public. The agenda only includes discussion of section 6.3.3 of the design guidelines, which encompases public art in the Historic Overlay District.