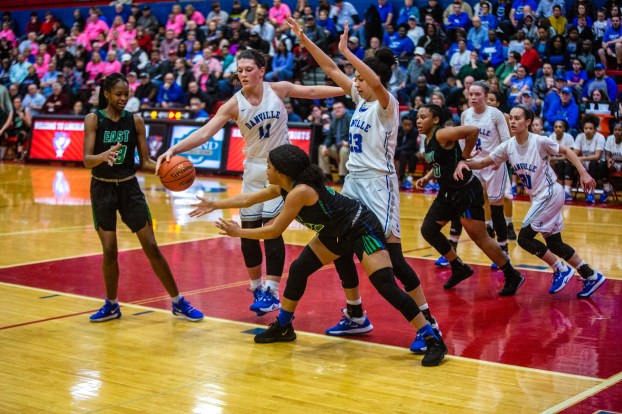 STANFORD — Danville had point guards in foul trouble, was late getting back on defense and just seemed out of sync much of the first half Monday night against East Jessamine.

Yet with a “little” prodding from coach Judie Mason, the Admirals woke up in the second half of the 12th Region Tournament opener and won 68-34 to advance to Friday’s regional semifinal here at Lincoln County.

“My players saw that other teams had easily beat East Jessamine. It didn’t matter what I told them. I am not mad at them but I have coached 32 years and I am not the best coach but I know if you are not ready to play, then what happened tonight happens.”

“Teen-agers are the reason some animals eat their young,” Mason said. “I just can’t handle getting outworked and we did the first half. Effort, effort, effort. That’s what I wanted. If this team gives me effort, then we can be pretty good. I never doubt this team if we play hard but we just didn’t start out playing hard.”

Still, Danville’s overall firepower was just way too much for East Jessamine (10-18), which had lost nine of its last 12 games.

Junior Lara Akers led Danville with 19 points on 7-for-14 shooting with three 3-pointers and twin sister Jenna Akers had 13 points and three more 3’s. Freshman Desiree Tandy had 11 of her 15 points in the first half and was 5-for-7 from the field and also had six rebounds and two blocked shots. Junior Camryn Preston added nine points, six rebounds, three assists and two blocks.

“We don’t have a superstar,” Mason said. “Lara doesn’t have to do all the scoring for us like Ivy (Turner) did last year. But Lara was standing around too much the first half before she got us going.”

Mason wasn’t sure if she would be facing Southwestern, last year’s state runner-up, or Casey County, a regional finalist the last two years, in Friday’s semifinal but insisted it didn’t matter.

“We are not supposed to even be in the gym with whichever team wins. Both of them are top 15 teams in the state,” Mason said. “There’s no respect for my team. Everybody at the regional draw wanted us. Every district runner-up wanted to play us. Every district winner wanted in our bracket.”

Mason said it wasn’t all bad that her team might have been looking ahead to the semifinals — Danville lost in regional semifinal to Casey last year — because it shows the Admirals believe they can win.

“If you lose now, you don’t get another chance,” Mason said. “I know we are going to play one of the better teams in the region, maybe the best team, on Friday. But at this point of the season, you worry about yourself and nobody else. If we give effort and play like we can, we will be fun. If we give the effort we did starting out tonight, we get beat. It’s all about effort now for us.”

“If the Akers are hitting shots and they get that full-court pressure on you, they could give anybody trouble,” Bridenbaugh said. “They are really good.”

Local sports have been a staple of community newspapers from the very beginning. That fact isn’t changing, although exactly what... read more