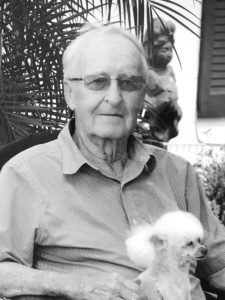 On Monday, February 24, 2020 John Robert Biggerstaff passed away peacefully at home at the age of 88.

The family later relocated to Bradenton, FL where he graduated from Manatee High School on June 3rd, 1949. He served in the U.S. Navy during the Korean war as an aircraft mechanic stationed in Miramar, CA. He later worked as a welder/pipefitter and joined the local union in Lexington, KY. He retired and moved back to FL in 1994 to the St. Johns’ river area of northern FL. He enjoyed boating and fishing and always had a beloved dog by his side. He loved the outdoors, good company and music.

The graveside service will be 1 pm, Wednesday, March 4, 2020 at Bellevue Cemetery. Rev. Tommy Valentine will officiate the service. Visitation will be prior to the service from 11 am – 1 pm, Wednesday at Stith Funeral Home in Danville. The online guestbook is available at www.stithcares.com