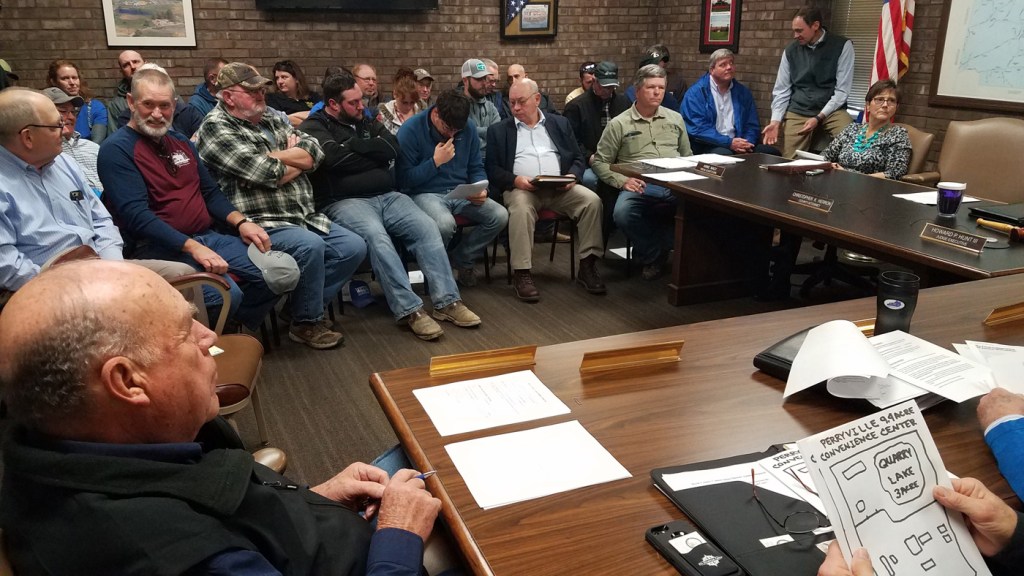 During a special meeting Tuesday morning, some Boyle County magistrates were initially skeptical of helping the local Soil Conservation District with the current dead animal-removal crisis.

But after hearing just how bad the situation is from dozens of farmers who attended the meeting, the fiscal court voted unanimously to move forward immediately on a plan to compost large animals at the Perryville Convenience Center.

The Soil Conservation District would reimburse the fiscal court up to $70,000 annually, under the plan. That money would help pay for a county employee to drive a vehicle that would pick up farmers’ dead animals; materials needed at the composting site; and other related expenses.

Judge-Executive Howard Hunt said there will still be some costs absorbed by the fiscal court’s general fund; those costs would come out of reserves this fiscal year and would be budgeted as a line item in future fiscal years.

The in-house option was by far the cheapest of four considered by the fiscal court Tuesday; the others ranged from $126,000 to $190,000 and involved hiring an outside company to remove the animals or driving dead animals to the Tri-K Landfill in Lincoln County.

A solution for dead farm animals is needed because the company that had provided removal services for years, Bluegrass Recycling and Animal Removal, went out of business at the end of January. Bluegrass Recycling had been charging $23 a head, and the Soil Conservation District had been covering that cost using its property tax revenues.

Other companies’ prices range from $80 to $100 a head. Alan Goggin, chair of the Soil Conservation District board, said there’s no way the district can afford that massive price hike with its current tax rate — especially not if it continues to provide the many other services it offers, including large equipment rental for farmers and agriculture scholarships.

Hunt said the problem amounts to an emergency for farmers and the local environment.

“I felt like having lived on a farm all my life … having no action was not an option,” he said.

How it could work

The approved plan calls for removal of a metal garage, stone building and utility pole at the Perryville Convenience Center, “in order to house a 150-foot-by-125-foot (concrete) pad for composting that would include a small berm along the edge of the property.”

“Leakage and odor are minimal to virtually unnoticeable,” according to the plan.

The Soil Conservation District paid for removal of 1,900 dead farm animals last year, as well as 300 dead animals from the local animal shelter.

Boyle County Solid Waste Coordinator Angie Muncy said she has already been working to apply for a composting grant from the state, which could cover the cost for equipment and preparation of the site. That application is due by April 1, she said, and if Boyle County can secure less than $200,000 it would “basically pay for anything we need down there” — excluding salaries and vehicles.

There’s also a chance the grant could pay for an incinerator that would allow the county to incinerate smaller animals from the animal shelter, and perhaps even offer pet cremation services, Muncy said.

Magistrates authorized Hunt to develop an agreement with County Attorney Chris Herron that could be signed by the county and the Soil Conservation District; and authorized Hunt, County Engineer Duane Campbell and Muncy to begin developing a plan for removing farmers’ dead animals immediately.

“I’m not going to apologize for trying to respond to an emergency situation,” he said.

Last Tuesday, some magistrates expressed displeasure that the county had accepted the truck without their knowledge, and that the Perryville Convenience Center had been examined as a possible location for composting of dead animals.

“We were not ready to present solutions to the court for consideration when this came out about the truck,” Hunt said. “We can give the damn truck back, OK? But if we don’t have to, we don’t have to. But it was one of those kinds of things that was a gift from the district to the county and it cost no money.”

Magistrate John Caywood said he worried about setting a precedent of providing financial assistance to a special taxing district.

“My concern is we have to be fair and treat all of the taxing districts the same,” he said. “Legally, I don’t know what we can do, because I’ve never seen this come up before.”

“No we have never subsidized a taxing district,” Treasurer Mary Conley acknowledged.

But dead animal removal had been the county’s job before and it asked the Soil Conservation District to take over that work when it became a special taxing district, she noted. So in order to allow the district to continue providing the service all by itself, the county would have to authorize an increase in its property tax rate.

“Otherwise, I think you have a cooperative effort that’s got to take place for the service,” she said.

Magistrate Phil Sammons expressed doubts initially about why the Soil Conservation District needed the county’s help, but ultimately made the motion to move forward with the plan.

Magistrate Tom Ellis said there is a historic spring down a hill on an adjacent property and he doesn’t want runoff to affect that water source, which runs into the Chaplin River.

But Jerry Little, the agriculture agent at Boyle County’s Cooperative Extension Service, said the composting program can be run so that there is no smell, no problem with “varmints” and no environmental problems. He said Frankfort runs a composting program already, which has provided free compost to local residents for five years with “zero complaints.”

According to information from the UK College of Agriculture, “composting is a natural decomposition process conducted by microorganisms that can be controlled under managed conditions. It reduces the size of the material by removing organic products, water and energy as carbon dioxide, vapor and heat. Also, the pathogens that cause 80 percent of animal mortalities are destroyed by the high temperatures reached during the composting process.”

A composting site should ideally be at least 300 feet away from a water source, property line or public road, and at least 1,500 feet away from churches, schools, businesses and public areas, according to the UK College of Agriculture.

Ellis suggested during Tuesday’s meeting that the county conduct a poll of everyone in Perryville and the surrounding area as to whether they want the animal-composting site near them.

He was also critical of how the problem had been handled so far, and said if conversations had been held in public sooner, there wouldn’t be so many people packing out the room and spilling into the hallway.

Farmer Don Whitaker stood up at that point to address Ellis.

“No disrespect, but we’re talking about polls and looking into this and that. I’ve got dead animals on my farm right now,” he said. “I don’t need to wait for another meeting.”

Whitaker also took issue, as did Hunt and Goggin at other times, with Ellis’ suggestion that work on the problem had been delayed or hidden.

“I’ve known about this for quite a while back before Thanksgiving,” he said. “… It needs to be taken care of this week.”