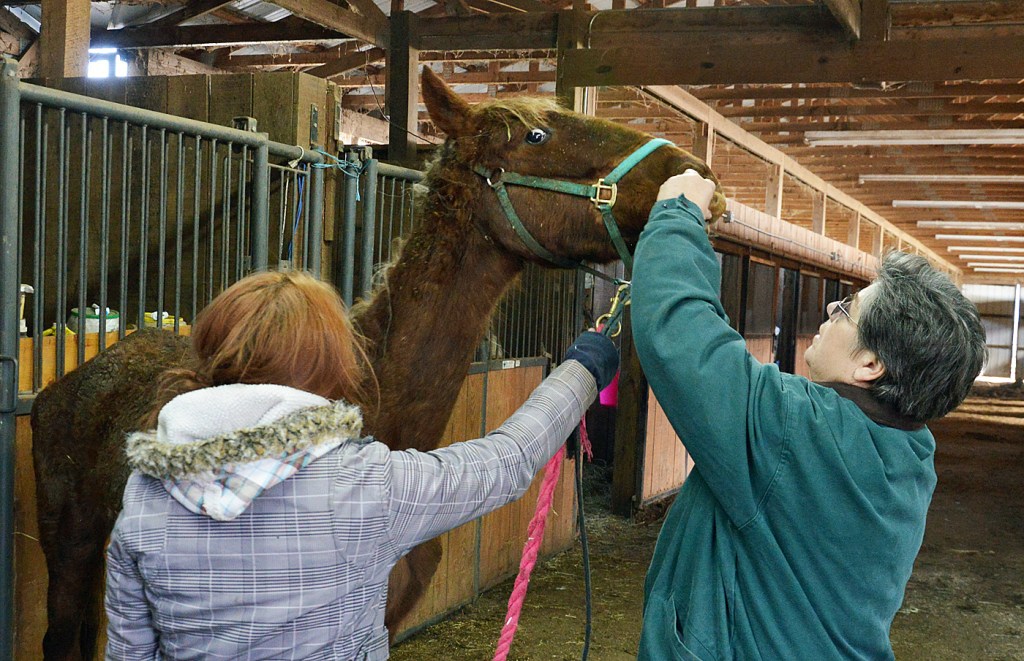 Jessica Deering, left, and Dr. Beth Johnson check the teeth of a young horse in February. (Photo by Robin Hart)

Three of the dozens of neglected horses recently found on a Boyle County farm were euthanized Tuesday, according to Jessica Deering, a volunteer helping to care for the horses.

The horses were suffering from “chronic health concerns” and pain as a result of the neglect they endured, Deering said.

All three of the euthanized horses were among the second batch of neglected animals that officials found recently, Deering said.

All of the remaining 31 horses now being cared for are “rehabbing beautifully” and are expected to be fine, she said.

Melanie Logue, 47, of Mercer County and Jennifer Bayne-Donnell, 47, of Perryville, were to appear in Boyle County District Court for their arraignments Tuesday morning, which was earlier than previously scheduled.

However, Logue failed to appear in court and the judge continued her arraignment until March 10 at 9 a.m. because she wasn’t properly notified of the date change. She is charged with 18 counts of second-degree animal cruelty and two counts of failure to dispose of carcasses within 48 hours.

Bayne-Donnell pleaded not guilty to 23 counts of second-degree cruelty to animals. Her next court appearance is set for March 18 at 9 a.m.

Both women were leasing barns and lots at a farm at 4600 Harrodsburg Road in Boyle County, where the starving, neglected and malnourished horses were found.

Logue was arrested Feb. 19 after Kentucky State Police discovered a dead horse next to a barn when serving an eviction notice on Feb. 14. KSP alerted the Kentucky Department of Agriculture, and the following Monday, animal cruelty inspectors were on the property. Another dead horse was found in a stall, and a third was euthanized.

While investigators were on the property, more issues were found in another barn, which Bayne-Donnell was leasing, including 16 horses found to be grossly underweight, standing in stalls filled with more than a foot of manure. Five more malnourished horses were discovered on a Faulkner Station Road farm property she was also leasing. Bayne-Donnell was arrested Feb. 21. 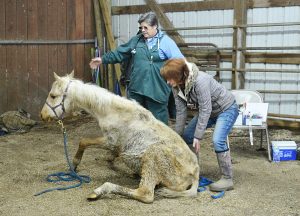 Anyone interested in assisting with cleaning and feeding the horses can contact the Danville-Boyle County Humane Society at (859) 238-1117 for more information. Tax deductible donations can be made online at www.dbchs.org/donate, by specifying “Horse Cruelty Case” so monies are placed in the Equine and Livestock Fund. People can also contribute to the GoFundMe campaign managed by Kasey Gordon at Burkmann Nutrition, which is helping pay for discounted equipment and supplies.