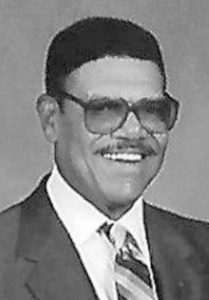 Raymond B. Hall, 97 passed away Friday, February 28, 2020. Mr. Hall was born in Danville, Virginia on November 6, 1922 the son of the late Greene and Lena Hall and was raised by George and Emma Trice. He was the widower of Lillie Mae Sleet Hall and was also preceded in death by his sister, Laura Stewart and Son-in-law, Rev. Dr. W. F. Newby.

Mr. Hall was a United States Army Veteran and missed being at Pearl Harbor during the Japanese attack by one day. He served in the Asiatic-Pacific Theater for three years. He was a member of Perryville First Baptist Church where he was a Trustee, member of the Brotherhood Choir, attended Sunday School and enjoyed being a part of the various Homecomings over the years. He also enjoyed helping in the kitchen. He began his service in the church at the age of seven years old where he was responsible for dusting the organ and pews.

He was retired from Southern Railroad where he worked as a machine operator. Going to flea markets, meeting and talking to new friends, sharing his life story and helping others were some of Mr. Hall’s daily activities.

In later life he was known for saying “Look, Listen, Learn”. He was a Masonic Lodge member, loved to give people nicknames and would often recite poetry that he remembered learning during his school days.

The funeral service will be 1:00 p.m., Saturday, March 7, 2020 at Perryville First Baptist Church with Revs. Jeff Yocum and Floyd Ragland officiating. Burial will follow with Military Honors at Spring Hill Cemetery in Perryville. Visitation will be at the church Saturday from 11:00 a.m. to 1:00 p.m.

Services are under the direction of Walden Funeral Home Perryville.