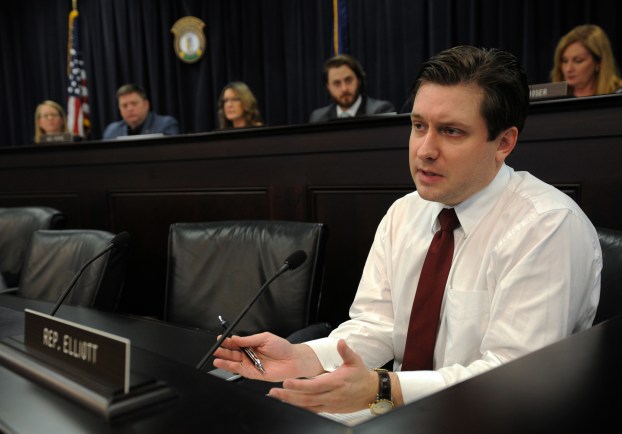 House Bill 319 is quickly moving through the approval process in the Senate and could become law soon. The legislation sponsored by Rep. Daniel Elliott (R-Danville) is “the best tool we have for battlefield preservation and underground railroad sites,” said Joni House.

House is president of the Kentucky Military History Preservation Alliance and serves as a special consultant to the Friends of Perryville in its preservation and conservation program. “The KMHPA has been very active in getting this bill passed. We have over 20 military sites throughout Kentucky,” she said.

The bill creates the Kentucky Battlefield Preservation Fund, used to match federal and private funding to preserve battlefields of the Revolutionary War, War of 1812, the Civil War and Underground Railroad sites that are eligible for listing on the National Register of Historic Places.

The bill was passed by the Kentucky Senate Standing Committee on Economic Development, Tourism and Labor. It passed first and second readings by the full Senate on Tuesday and Wednesday. After a third reading, the bill would head to the governor’s office for Andy Beshear’s signature.

Elliott sponsored the bill, with help from Rep. David Meade (R-Stanford) to navigate it through Kentucky’s House of Representatives. Sen. Rick Girdler (R-Somerset) is helping guide the bill through the State Senate.

House said the American Battlefield Preservation Program received its largest-ever chunk of funding for this fiscal year, at $13 million, which goes to the program’s Land Acquisition Grant Program — a matching grants program through the National Park Service encouraging private sector investment in battlefield protection. It was first funded by Congress in 1999, and it has successfully preserved over 32,000 battlefield acres in 20 states since then.

The state battlefield fund and appropriation of funding will enable preservationists to take advantage of federal matching funds in a 1-to-1 matching grant program.

“It’s a mechanism that’s been in place in other states for some time, and will give us the ability to put some money in there to have when we have a critical piece of battlefield that needs protection,” House said.

A perfect example, she said, of when this is needed would be the acquisition that was just completed on the White Tract at Perryville Battlefield. It included the “extreme right flank of Maney’s Confederate Brigade,” House said. 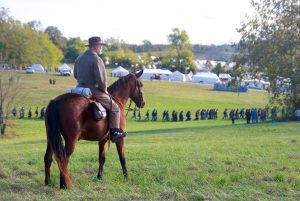 A reenactor surveys the scene from horseback during the Battle of Perryville Commemoration in 2016. PErryville Battlefield State Historic Site is one of many historic battlefield sites that could benefit from the creation of a Battlefield Preservation Fund. Legislation to do just that, House Bill 319, needs to pass one final reading from the state Senate and receive the governor’s signature to become law. (File photo by Ben Kleppinger)

“You can’t ever replace it if that ground is lost or developed. Since it’s road frontage, people will buy it and develop it. How do you get it back once it’s gone? You can’t. We describe that as critical ground,” she said. When battlefield land like this becomes available, “we want to have the money to purchase it. In Perryville, you have a lot of families who have owned this property for 100 or more years. If their loved one dies, or they move away, they don’t have any interest in farming 100 acres in Boyle County.”

The land can then go up for auction, or “generally, the family approaches the Trust about purchasing the property — the way it happens all the time at Perryville,” House said. She said Perryville Battlefield is about 90% preserved.

“But this funding would be able to be applied to Richmond Battlefield, Wildcat Mountain Battlefield, Blue Licks — any of the Revolutionary sites.”

“Kentucky is home to several of most consequential battlefields in the United States. From the frontier outposts of Logan’s Fort and Fort Boonesborough to the fields of Mill Springs and Perryville, Kentucky’s battlefields tell the stories of the conflicts that defined our nation’s tumultuous first century,” said Adam Gillenwater, state and local relations manager for the American Battlefield Trust, a national non-profit organization that has preserved nearly 3,000 acres of battlefield land in Kentucky. “The creation of a state battlefield fund in the Bluegrass State will help to ensure that Kentucky’s battlefields are preserved and protected for the benefit of current and future generations. We applaud Reps. Daniel Elliott and David Meade and Sen. Rick Girdler for their laudable efforts to pass this legislation.”

“I always say battlefield land is the rarest land in the United States — but we don’t want to make any more of that kind of property,” House said.

HB 319 is modeled after legislation already in use in Tennessee and Virginia, where it’s been a “godsend,” she said.

In Virginia, because there were so many battles there, some of the land was priced in the millions per acre, House said.

“It is very important to conserve and preserve what we already have. This is a really good piece of legislation.”

The Housing Authority of Danville has been awarded a three-year grant from the U.S. Department of Housing and Urban... read more