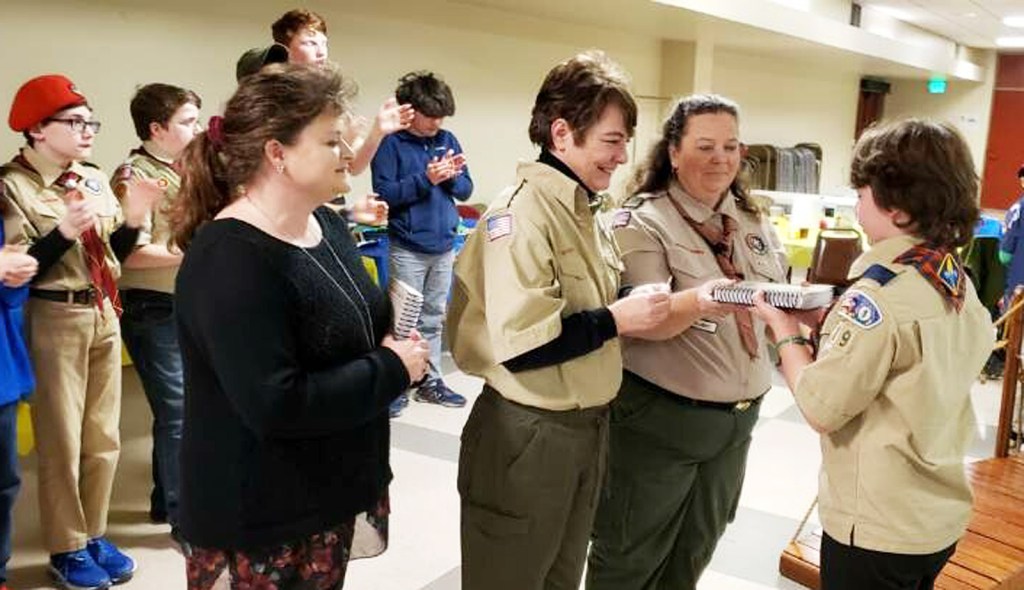 The first all-female troop of the Boy Scouts of America in Boyle County is forming and has accepted its first member. Having BA open to girls in Danville is “as big as when scouting came to Danville,” said Steve Ellis, committee chair for the new all-female Scout Troop 2.

This past Saturday night, Cub Scout Pack 119 not only recognized 12-year-old Maya Wade as the first female Arrow of the Light Cub Scout in Boyle County, but also as the first girl to symbolically walk across the pack’s wooden bridge from Cub Scouts to join the newly organized Scout Troop 2.

Troop 2 Scoutmaster is Anna Gomez, but she’s not new to Scouting, Ellis said. Gomez has several years of experience as an assistant scoutmaster of Troop 119, where her son Victor Gomez recently received his Eagle Scout status. She’s also earned a Wood Badge, which “is an advanced, national leadership course open only to Scouting volunteers and professions,” according to the BSA website. “The purpose of Wood Badge is to develop skilled leaders who can strengthen Scouting units in achieving the mission of Boy Scouts of America.”

Assistant Scoutmasters are Kelly Milburn and Yvonne Oliver. On hand to assist in the installation ceremony for the new leaders were Troop 119 Scoutmaster Stuart Harper and Troop 27 Scoutmaster Mike Nagorka, Ellis said.

Girls were first admitted as scouts in the BSA last year, and Pack 119 Cub Scouts has several girls who are getting ready to join Maya next year, Ellis said.

Because BSA tends to be a family endeavor, with moms, dads and their sons participating, “sisters were left out,” Ellis said.

Now with the organization open to girls, “It’s attracting girls whose families are in Boy Scouts,” he added.

The handbooks for female troops have exactly the same content. However, the pictures have been updated to show girls and women doing the activities, Ellis said.

Troop 2 will compete with the male troops in games and contests, Ellis said. Knot tying is one competition — and of course, the Pinewood Derby.

Troop 2 was chosen as the troop number to reflect the history of Scouting in Boyle County, Ellis said. The original Troop 2 started in December 1925 as the first troop in the Isaac Shelby Area Council, of which former Advocate-Messenger editor Chauncey Alcock was the first member. The Isaac Shelby Area Council existed until October 1928, when it was consolidated with the Daniel Boone Council of Winchester and the Lexington Scout Council to form the Blue Grass Council, which is the local council today, Ellis explained.

At the time of consolidation, Troop 2 became Troop 27, which continues today at Centenary Methodist Church.

Troop 2 is looking for new members from sixth to 10th grades. It meets Monday nights at Saints Peter and Paul Catholic Church. The leaders and member are looking forward to their first outing in Perryville later this month.