A Harrodsburg man was arrested early Thursday morning after allegedly shooting a gun several times from a vehicle on Bluegrass Pike. 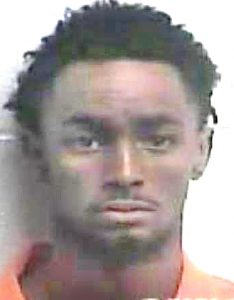 Boyle County deputies were dispatched around 2 a.m. in reference to a possible drive-by shooting that had just occurred on Bluegrass Pike. The unidentified caller told officers that shots had been fired within 20 to 30 feet of the residence, said Deputy Sheriff Casey McCoy Thursday afternoon.

Officers located and stopped a black passenger car that was traveling on Gentry Lane near U.S. 127. Taveon Lavar Goodman, 21, of Harrodsburg, was a front seat passenger; he admitted to officers that he was the shooter, McCoy said.

Deputies located a handgun in the seat next to Goodman and a rifle in the floor between his feet, and shell casings were all around him, McCoy said. An investigation showed that Goodman had an active emergency protective order out on him which stated that he was armed and dangerous, and he wasn’t allowed to possess firearms. It was also determined that Goodman was intoxicated. He was arrested and charged with first-degree wanton endangerment, discharging a firearm across a public road, and violation of an emergency protective order.

McCoy said a witness told officers that the vehicle had been traveling slowly on Bluegrass Pike, then stopped and several shots were fired, then it went a little further, and shots were fired again. This happened several times, McCoy said. The shots were probably not aimed at the residents, but toward the open field, he added.

The driver and back-seat passenger told officers they had tried to get Goodman to stop firing the guns, but he wouldn’t, McCoy said. They were not held on any charges.

A similar incident happened two nights ago at the same location, he said, but officers couldn’t prove that it was the same people involved.

Goodman was being held in the Boyle County Detention Center on a $5,000 cash bond Thursday.

The first all-female troop of the Boy Scouts of America in Boyle County is forming and has accepted its... read more