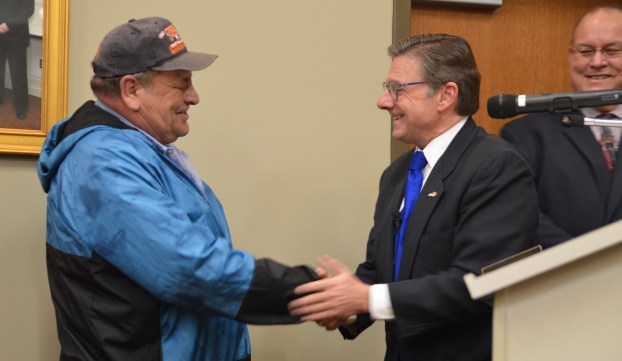 ‘The heartbeat of the city’

The City of Danville recently honored a longtime employee who retired. Carl Harmon, a licensed water distribution and wastewater collection operator, has been with the city since 2004.

At last week’s city commission meeting, Municipal Utility Manager Earl Coffey said he’s been through a lot with Harmon. “Or Carl G., as we lovingly refer to him,” Coffey said, as Harmon stood near the podium, listening and smiling. “I can talk a lot about Carl.”

Coffey said he and Harmon have “been in a lot of tricky situations” together. “We drank a lot of coffee together, trying to figure something out. And Carl will always make you laugh. You are rarely around him when you don’t smile or laugh at something. We generally spend a lot of time in good humor because of him.”

Harmon said he appreciates the time he spent with the City of Danville and will miss all those he worked with.

City Manager David Milliron said when the city loses a tenured employee like Harmon, “it’s a huge knowledge-drain on the city … The reality is employees like Carl are the heartbeat of the city. They are the folks who go out there and make it happen, the things we take for granted.” Milliron said he had heard stories about the big ice storm of 2009, and how Harmon and others were up working for four days straight.

“But they do it for you, the residents, day in and day out. Losing an employee with a lot of skills — the skillset he brings … That’s the priceless things we lose. Congratulations,” Milliron said.

Mayor Mike Perros said he recalls a big water break out on Lebanon Road that had to be worked. “And it was cold that day. I didn’t know who all was over there, working on it, but I just thought people are down there, up to the neck in this ditch in this freezing cold weather, and water was flying everywhere … We appreciate what you did and what you mean to this community,” Perros said.

The first all-female troop of the Boy Scouts of America in Boyle County is forming and has accepted its... read more