Editor’s note: Research for this article was by local historian Mike Dennis of Parksville. 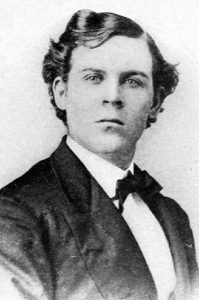 A Danville man is credited for saving the lives of his shipmates aboard the USS Saginaw in the late 1800s when it wrecked near Ocean Island in the Pacific Ocean on barren and uninhibited shores.

The Saginaw, had made several trips from California to Honolulu before Lt. John Gunnell Talbot Jr. of Danville volunteered and joined the crew on Sept. 23, 1870.

The USS Saginaw with 90 officers and crew on board was headed to Honolulu when it wrecked on Ocean Island near Kure Atoll, Oct. 30, 1870.

Kure Atoll, Ocean Island is destitute, bleak, barren, and exposed to the elements.

Lieutenant Commander Montgomery Sicard had three reasons for heading to Ocean Island on Oct. 28. He captured sea turtles to replace those which had escaped from the Saginaw when more were needed for food; to check the location of the island on his chart; and to rescue anyone who might have been marooned there.

Most of the things aboard were salvaged, however, food was rationed. The survivors ate seal, turtle and sea birds.

Sicard also converted a boiler from the Saginaw to a distiller to provide a constant supply of fresh water.

Talbot volunteered to take a boat to Kaua’i to rescue the stranded crew. Preparations were made for the journey. Navigation charts were copied and almanacs were used to help. Water and food were taken to last 35 days.

Many of the crew volunteered. Talbot along with John Andrews, Peter Francis, William Halford, and James Muer (Muir) were chosen for the 1,500-mile journey on Nov. 18.

Most of the provisions were ruined except for dried potatoes.

Talbot sighted land Dec. 18, after the boat had drifted for 32 days. They entered the Bay of Halalea on Kaua’i, toward a small island of Moku Aeae, and drifted another five miles

between Hanalei and Kilauea.

Muir and William Halford, survived and walked to shore. Muir died soon after. Halford reached Hanalei with assistance, where the victims were buried. Francis’ body was never found.

It took a rescue team four days to return to rescue the survivors on the Saginaw and then they left for San Francisco. 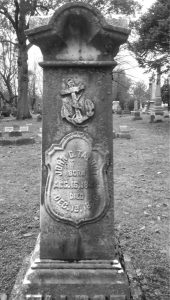 Navy records show Talbot was buried with the other men, but a tall marker in Bellevue Cemetery shows he was buried there.

“Nothing of record has been found in this office concerning the final burial place of Lieutenant John G. Talbot, USN,” said in August 1924.

“The Bureau does not feel that the erection of a monument in the (Bellevue) cemetery in Danville can be taken as positive evidence the Lieutenant Talbot’s remains are buried there.”

Admiral Perry Caret, of the Saginaw, still living in 1924, said he believes the tombstone in Danville is a cenotaph, and that Talbot’s fiancee probably erected it without moving the body from Hawaii.

Several sources state that the body was moved to Danville including the Pacific Commercial Advertiser, published July 22, 1871. Bellevue Cemetery records also stated Talbot was buried August 4, 1871, in the local cemetery.

The Saginaw washed ashore and brought to Mare Island. It was taken east by the USS Jamestown, and used as a training ship for apprentices. In 1889 it was preserved in the US Naval Academy Museum.

It was supposed to have been taken back to Kaua’i, but instead as of 1954, it lay rotting at Fort Washington, Maryland.

It is now in the Castle Museum of Saginaw County History, in Saginaw, MI.

In 1898, two torpedo boats were named, one for Talbot, the other for his classmate, friend, and relative, Hugh McKee. In 1942, a US Navy destroyer was named the USS Halford in honor of William Halford.

George H. Read, an officer on the Saginaw, authored “The Last Cruise of the Saginaw” in 1912.

The US Naval Academy has in its chapel, two tablets, honoring both Talbot and his Centre classmate and relative, McKee. Talbot’s tablet reads: “John G. Talbot, born August 16, 1844; died December 8, 1870. Graduated at U.S. Naval Academy in 1866. Ensign, Master, Lieutenant. On October 29, 1870, the United States Ship Saginaw, was wrecked near Ocean Island in the Pacific and its officers and men were cast on its barren and uninhabited shore. In order to effect their rescue, Talbot volunteered with four seamen under his command to undertake in a small boat, a voyage of 1500 miles to the Sandwich Islands. He accomplished his perilous mission, but at how great a cost this stone discloses.

“After enduring extraordinary hardships for thirty-one days he attempted to land on the coast of Kaua’i, one of the Hawaiian Group and with all but one of his men was drowned in the surf.

Talbot was born December 16, 1944, to John Gunnell Talbot Sr. and his second wife, Sarah Hann. She was the widow of Joshua Rout.

The Talbot family residence is known as the Talbot-Haskins House, a “Carpenter Gothic” style located at 420 E. Lexington Avenue. It was built by John Sr.

Lieutenant Talbot was described as “a man of remarkably handsome personal appearance.”