After gruesome triple-murder in 2013, police got their first leads from 8-year-old boy 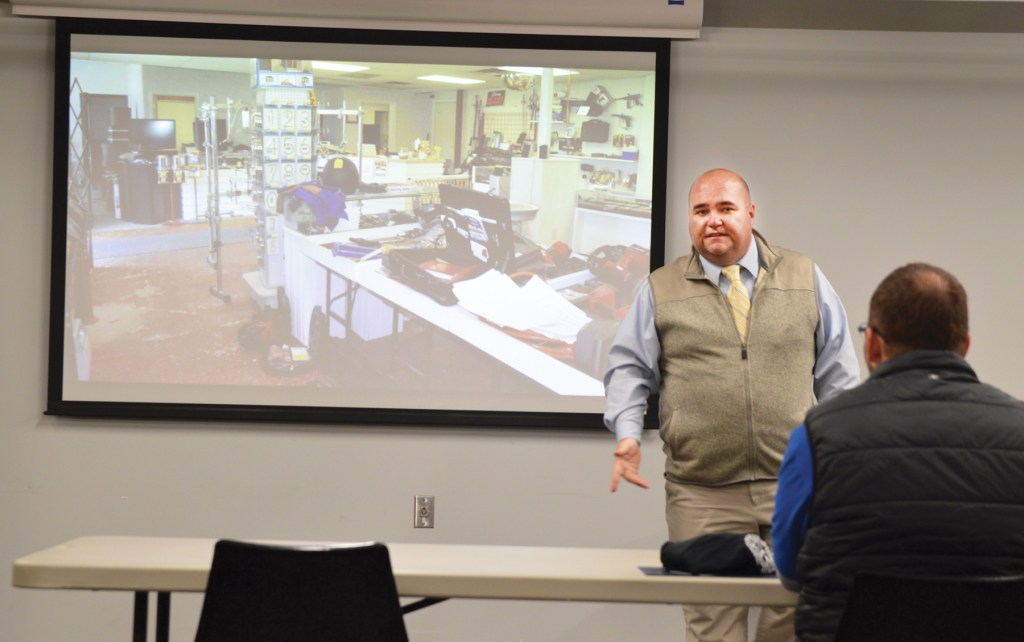 During the last Danville Citizen's Academy, offered by the police department, Maj. Kevin Peel went through photos taken on the scene of the 2013 triple murder at ABC pawn shop in Danville. Peel was lead detective on the case and explained how investigators worked to tie evidence together, resulting in the guilty plea of Kenneth Allen Keith, now serving life in prison. (Bobbie Curd photo)

Editor’s note: This is the first part of a series on the ABC pawn shop murder case overview with Danville Police Det. Kevin Peel. This story contains descriptions of the crime scene, which may be graphic for some readers.

A rare glimpse inside of a notorious local murder case was shared during the final evening of the Danville Police Department’s last Citizens Academy. Maj. Kevin Peel, who was lead detective on the ABC Pawn Shop triple-murder case from 2013, led the case overview, including  a slideshow from the scene.

Due to the persistence and thoroughness of local law enforcement, along with “priceless” help from other agencies, Peel explained how investigators were able to work to tie the evidence together — a step-by-step look at all the intricacies involved with solving such an incredibly complex and bizarre case.

Peel maintains that amazingly, part of the reason authorities were able to make an arrest in less than a month is due to the intelligence and strength of an 8-year-old boy.

Kenneth Allen Keith, a former Somerset preacher and pawn shop owner, pleaded guilty in 2017 in order to avoid facing the death penalty and is currently serving life without parole in prison. Keith was charged with murdering Michael and Angela Hockensmith, ABC owners, and Dan Smith, a gold broker, in front of the Hockensmiths’ two young children on Sept. 20, 2013.

But a lot of work had to be done before investigators arrested Keith.

Peel said the 911 call from Andrew Hockensmith, who was 8 at the time, as well as interviews with the child, resulted in priceless information needed in order to charge Keith with the murders.

Andrew told the dispatcher his parents had just been killed; that he didn’t know if “the robber” was still in the store or not; and that he was in the backroom with his baby sister.

The child was on the phone with a dispatcher for six minutes — the time it took for authorities to respond to the scene and gain entry into the business, which was locked from the inside. Peel showed a slide where the glass was busted out of the front door.

“Andrew was right inside the door talking to dispatch on the phone. We were able to talk to him and get a little more information while we were waiting for someone to get there with something to get us in; we ended up breaking out the glass to make entry,” Peel said.

He gave a warning about the next few slides as being pretty graphic, as they showed the victims’ bodies on the floor of the pawn shop. “I’m not doing this for any kind of shock value; it’s part of Andrew’s story and it’s part of the whole thing. So this is what he experienced.” 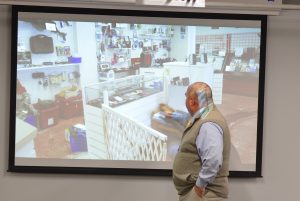 During the last Danville Citizen’s Academy, offered by the police department, Maj. Kevin Peel went through photos taken on the scene of the 2013 triple murder at ABC pawn shop in Danville. Peel was lead detective on the case and explained how investigators worked to tie evidence together, resulting in the guilty plea of Kenneth Allen Keith, now serving life in prison. (Bobbie Curd photo)

Peel said authorities knew there was a victim as soon as they entered the shop — gold dealer Smith, who was 60, from Richmond. “There was a pattern of blood on the floor that you could easily tell he had been moved … It was apparent, as we made entry, that he was deceased, there was nothing that we could do for him.”

As authorities turned toward the door that goes behind the counter of the business, they saw Michael Hockensmith’s body; Peel and a sheriff’s deputy were the first ones to go through this part of the room and into the back of the business.

“From this point, if you do a 180 and look behind you, that’s where the body of Angie Hockensmith was. Something that sticks out to me, I’ll probably never — Angie was laying right there, and I almost fell over her. When we walked back there and saw Mike, I began to back up and move, and she was right there.”

He said the youngest child was seated on the ground, beside her deceased mother.

“It’s something they preach at all the trainings we go to, about having tunnel vision. Until I looked at her and saw the child, I never heard her scream. But as soon as I saw her, that’s all I could hear,” Peel said. “I know she didn’t start when I saw her, but I had never heard her. We were so fixated on everything else.”

Peel shows another picture taken from the backroom, which was from Andrew’s viewpoint when he took his sister there for safety. “That’s the view Andrew had as he watched his parents being killed. He had taken his sister and hid until we arrived and then they came back out.”
Authorities immediately set up a perimeter and began going through everything they could, observing there were 22-caliber shell casings all over the business. “There were some that were spent and some that had not been fired, but they had been struck (released from the gun but not successfully fired). So, in other words, he pulled the trigger, but they didn’t fire for whatever reason. Could’ve been bad ammo, and we think we know why they didn’t fire, but we never recovered the gun so we couldn’t test it,” he said.

They found a magazine that went to a Ruger Mark 2, a semi-automatic 22-caliber pistol. “There’s a lot of stuff we didn’t get good pictures of on the scene because we didn’t recognize its place” in the murders, Peel said. He said there were a lot of guns in the shop, and there were other weapons lying around, so some things didn’t stand out to them at the time.

Andrew told authorities when the shooter first arrived, his dad and Smith were on one side of the shop conducting business as they always did, so they were able to determine that Smith’s briefcase had been moved. “Beyond that, you can see there’s blood on some of the papers that clearly came out of the briefcase that had identification on them and proved to be Smith’s.”

Peel said a receipt book belonging to Smith proved to be one of the most crucial pieces of evidence they had, “which goes to show what I say — we’ll often times take wide shots (pictures) because we don’t necessarily know what we’re looking at. This receipt book belonged to Dan Smith, which we knew — but we didn’t know how it would come into play later.”

But that’s all they had.

Coming Tuesday: Authorities had to follow every lead on the case, until a big one shed some much-needed light.