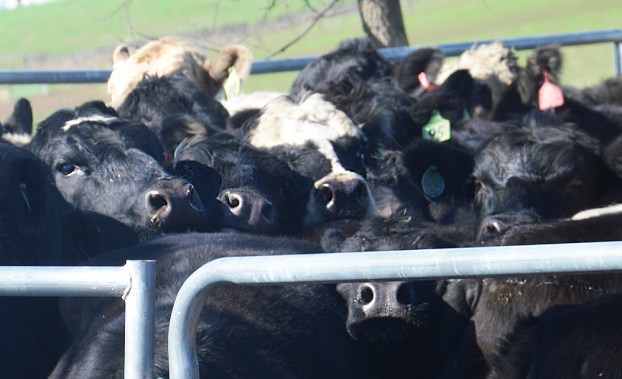 A few faces of the Angus cattle are watching the excitement in the corral off of Lancaster Road. (File photo by Robin Hart)

A Perryville official, along with a few other residents, don’t want a county dead livestock composting facility near their town.

“It’s not in the city limits and it is a fiscal court decision. But I think as city council members we need to be asking our community how do they feel about that. I don’t like it,” Perryville City Council member Adam Gray said at the end of the council’s meeting Thursday night.

“I think it’s going to have a negative impact,” on Perryville, he said. He told the council that Boyle County Fiscal Court would be meeting at 9 a.m. Tuesday to make a final decision if the proposed animal carcass compost facility should be located at the Perryville Convenience Center, which is just outside of the city limits on Harrodsburg Road. He said he didn’t want to speak on behalf of the council or anyone else, but if they were against the proposed site, “If you can get out of work, stop by,” Gray said.

The experts on composting said there wouldn’t be a bad smell at the facility, Gray said. However, in July when a cow dies on Friday and is picked up on Monday, “It’s going to smell.” The bad smell will be on the truck as it goes right through town and past the restaurant and food truck, as well as the convenience stores where people congregate.

And when the truck stops at the traffic light, “That smell will linger,” Gray said on Friday.

Plus, the smell won’t quickly dissipate after the carcasses are dumped before being buried under several feet of organic material, he added.

He thinks having a truck loaded with dead animals going through town, past businesses and residential areas will “contradict” the image that Perryville wants to portray. “It will be a stigma,” for the city, he added.

“It’s way too close according to the industry standards,” Graves said.

According to UK’s recommendation, “The composting area should not be built in a floodplain, within 300 feet of a water well, stream, sinkhole, pond, property line or public road, or within 1,500 feet of churches, schools, businesses or any other public use area.”

Graves said the proposed compost site is within 200 feet of where “hundreds of people drop off their trash” which is a public area. And it’s next to the sewer treatment pond which flows directly into the Chaplin River, he said. The site is also closer than the recommended 1,500 feet from businesses, which he said includes rental property and the subdivision which is located behind the site.

Another complaint Graves has, from reading the recommendations, is that since the site will not have a roof, in the winter and spring where there is more rainfall, there will be too much moisture which will cause the decomposition process to “shut down leading to a bad odor.”

Gray said the fiscal court was having a decomposition composting expert at the meeting on Tuesday to answer the public’s questions. “I’m going to the meeting and ask the expert.”

Perryville Community Center to be up for sale

The Perryville Community Center, which overlooks the Chaplin River next to Merchants Row, will soon be up for sale. The... read more