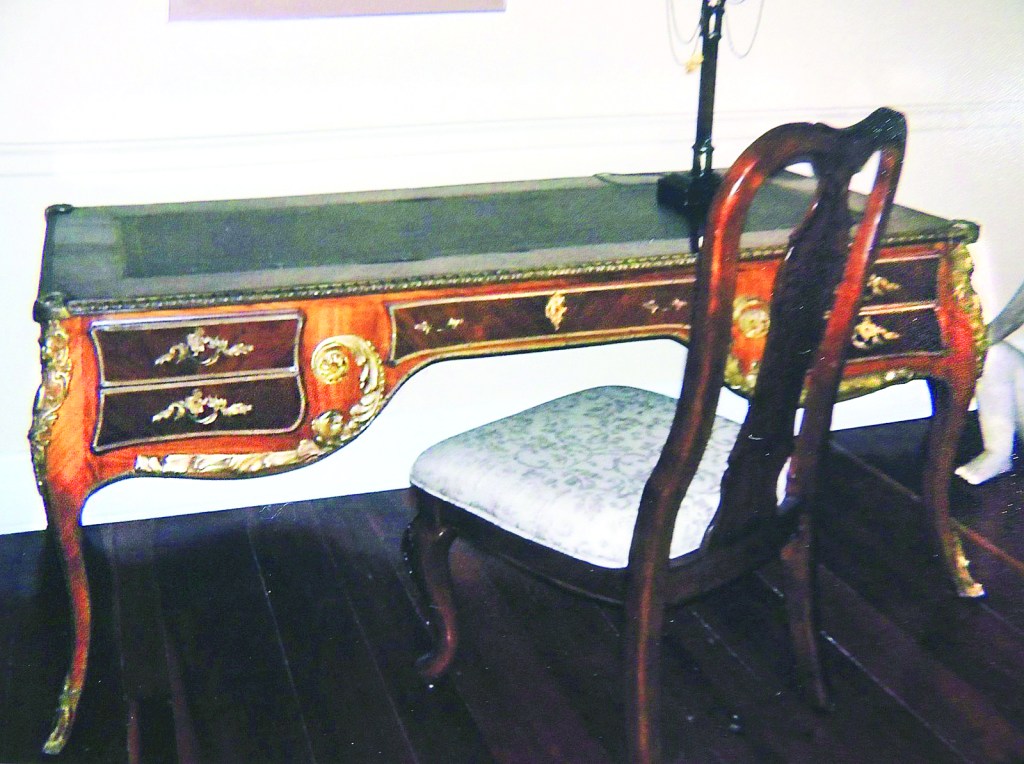 Question: Hello Mr. Sampson, I bought this bureau plat at an auction in Los Angeles in 1979. I had it appraised when I lived in Hunting Beach. The appraiser told me never to sell it as there were so few of them left after the French Revolution.

I lost that appraisal when I moved to Cincinnati in 2006. I’m planning on downsizing again and this time I won’t have room for it. It measures 30 inches high x 71 inches wide x 31 inches deep. It’s made from Kingwood veneer. It has brass and ormolu mounts and trim. And a black leather top. There are no markings that I can find.

What would it be worth when I get ready to sell it? Thanks for your time.

Answer: You have a stunning bureau plat. A bureau plat is a French writing desk. I would have liked to have seen that appraisal too. As French-style furniture often has the “tagline” of something about the French Revolution.

This is kind of a a touchy topic, as many fine pieces owned by the aristocracy

were destroyed. But these things were expensive when new, and many times were sold, so many examples move about in the market. Now this is where I come in.

First, thank you for so many nice clear photos. They helped me to make this value judgment. Your desk is likely from the early 1900s to the 1920s. The construction techniques just aren’t in keeping with a piece from the 18th century. That’s not to say that it’s not a stunning piece, and well made at that.

But, it’s a more modern piece. The ormolu, which means a gold leafed bronze, or in this case, I suspect gold leafed brass. These mounts and hardware are cleanly cast and well finished. A real sign of a quality piece. Kingwood veneer is a type of exotic rosewood imported from Brazil. It’s very hard to find large logs of this rare wood and is almost solely used for veneer. There’s a reason why they call it Kingwood.

There was a time, at the turn of the last century, that ornate French furnishings were at the top of elite decorators’ lists. Today, not so much. It’s there, but it’s a very fussy style if not handled properly.

Of course that affects values too. Being in landlocked Ohio won’t help either.

I did some online auction research, and believe me, prices were all over the place. I focused it down to the last three years and still it was sketchy. Bear in mind that period antiques from the 18th century or very early 19th century are fetching incredible prices. But I think that in your area, it should sell for anywhere from $1,200-$2,500. Note the emphasis on the word “should.”

I urge you to reach out to high end decorators, auction houses and even consignment shops. It’s a tough market for such things.

Now, on the flip side I’d expect this piece to sell in a retail environment for about $4,000 or more. But that is the difference between retail and wholesale. I know that both of these values are likely shocking, but the market has changed a dozen times since 2006, and certainly since 1979.

Thanks for a great question.

Change should be welcomed and not feared