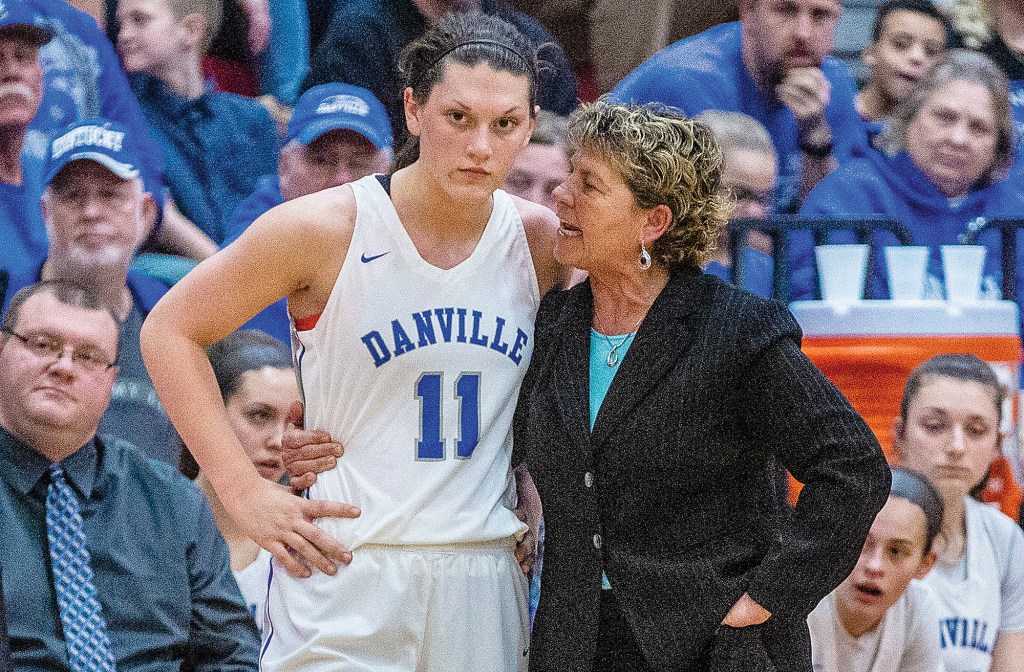 After losing leading scorer Ivy Turner — who started every game at Northern Kentucky University this season — off last year’s team all Danville coach Judie Mason heard was what her team couldn’t do this year.

Couldn’t win the 45th District. Couldn’t have a winning record. Couldn’t be a factor in the All A Classic.

Yet the Admirals went 23-9, reached the All A Classic state semifinals, won the 45th District Tournament and got to the 12th Region Tournament semifinals again with a team that did not have a senior. 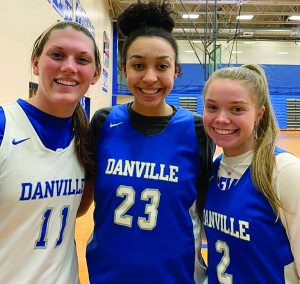 From left, Camryn Preston, Desiree Tandy and Lara Akers all earned all-12th Region honors this year and all back next year.
(Photo by Leeann Akers)

“This year reality kind of smacked them in the face without Ivy. They got no respect,” said Mason. “Nobody gave them a chance to be good. I am so proud of them. We didn’t have a superstar but I really liked this team.

“Remember I was not with them last summer, either. I retired and couldn’t coach them then. Now I get to have them all in the gym this summer. We know we have to get better but the girls want to be better.”

That’s why Mason had players texting her asking to get in the gym two days after the regional tourney loss to eventual regional champion Casey County.

Nobody will be overlooking Danville going into next season. Rockcastle County, which made the regional final, had three freshmen among its top six players. Mercer County returns most of its players off the 46th District championship team, including star freshmen Timberlynn Yeast and Anna Drakeford. Wayne County brings back Macey Blevins, the region’s top scorer, and other starters. Mason says Southwestern will be good like always.

“Casey exposed a lot of our weaknesses in the region,” Mason said. “But until this year these girls had all just been complimentary players. They just had to do what Ivy told them. They knew their roles and were great. This year they had to do more and next year they need to do even more.”

Danville certainly has the pieces returning to do more.

— Junior Lara Akers averaged 12.9 points and 2.8 rebounds per game this season, went over the 1,000-point career mark and led the team with 59 3-pointers. She hit 74 percent at the foul line and 40 percent from 3-point range.

Akers’ numbers might have been even better if not for a late-season ankle injury that kept her in a walking boot except when she was practicing or playing.

“She has to handle the ball more and create her own shot instead of relying on others to get her the ball. She has a sweet pull-up shot. She just doesn’t believe she can do it. We need her to be more of a point guard and not just a shooter,” Mason said.

“Des is going to be special,” Mason said. “She had to play inside for us but she can handle the ball and do a lot of things.”

— Junior Camryn Preston, who transferred from Mercer County, added 10 .8 points and a team-high 7.5 rebounds per game. She got to the foul line 143 times.

“I think she could be so good if she just let herself believe it. She has no confidence in her own game and you could tell that the last couple of games,” Mason said. “If she realizes what she can do, she could be great. She just has to get in the gym and work, and she will. I love her as a player but just wish she was a little meaner on the court.”

— Junior Jenna Akers added 7.8 points and 4.5 rebounds per game. She hit 34 percent from 3-point range with 42 makes and was a 76 percent shooter at the foul line.

“Ayana is a fierce competitor,” Mason said. “She doesn’t back down and she won’t. Ayana is two guard, but she plays the point for us and does it with no complaints.”

“I tell here she is as lazy and as fast as anybody I have coached,” Mason said. “She will just jog, realized she’s going to get yelled at and then catch up. If I can ever get her motor going all the time, we could really play the way I want.

“She is a pure point guard. She has just not figured out how to work hard enough to where it comes easy. I think that changes this summer. She loves the game and is coachable. I am as hard on her as anybody I have ever coached. She takes it and doesn’t back down. She’s not afraid. She just has to work harder.”

— Juniors Madison Terrell and Haley Price-Hancock both play only limited minutes but give Mason more inside depth than she’s ever had at Danville.

“They came so far this year,” Mason said. “We started trying to get the ball inside some but my guards have to get it inside more to them.”

Mason said her team overcame a lot this year to have the season it did and learned what it will take to win a regional title. She will probably “bump up” the level of competition she plays in holiday tournaments next season but notes Danville already has a “hard schedule” because of the quality of play in the 12th Region.

“Hopefully we get to All A State because that’s always good, hard competition. I like to have a team try and make a run at the All A (championship) and then prepare for the rest of the season,” the Danville coach said.

“We have a good team. I am okay not having a superstar. You can win that way and that’s the kind of kids I like to coach. They were focused this year for the regional. We just couldn’t make shots.”

What about the pressure of maybe being the preseason 12th Region favorite?

“We are okay with that because I tell them every day we are the best,” Mason said. “Really, it does not matter if we are picked at the bottom or top. I am going to find some way to motivate them and make us the best we can be, but I do really like the team I have coming back.”