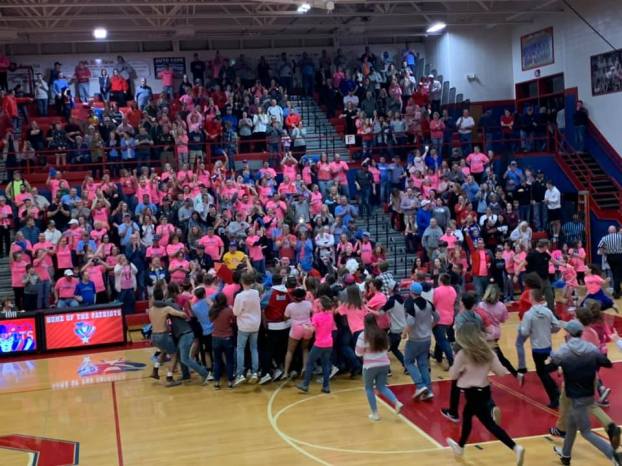 STANFORD — Third time was indeed the charm for Casey County.

After losing in the 12th Region Tournament title game the previous two years, the Rebels took the lead early over Rockcastle County and won 55-41 to earn their first trip to the state tournament since 2009.

The Rebels got 18 points from Jordyn Stephens, 16 from Natalie Duggins and 15 from Lauren Lee — all seniors — to avenge a loss to the Rockets in the 47th District Tournament. Stephens also had seven rebounds and four blocked shots, Lee had six assists and Duggins pulled off six rebounds.

Lee took over after Rockcastle cut the lead to 30-29 in the third quarter and scored seven straight points. After that, the Rebels never were in trouble.

Lee, Stephens, Duggins and Gena Cravens, another senior, all made the all-tournament team for Casey, which will take a 27-7 record to next week’s state tournament at Rupp Arena in Lexington.

“I’m never satisfied but I certainly am happy,” Casey coach Tara Weddle said as Casey players and fans celebrated on the court. “These seniors deserved this. They have been fighting since they were sophomores to get to state and now they finally have.

“We played extremely well defensively and we were so much more aggressive than we were when we lost to them in the district. Tonight we came out ready to go.”

That aggression paid off as Casey went 16-for-17 at the foul line while Rockcastle was 6-for-7. The Rockets also had 14 turnovers while Casey had just eight.

Cravens became only the third Rebel to go over the 2,000-point mark this season. She had just two points — two foul shots in the fourth quarter — but took only two shots. She pulled off six rebounds and was aggressive defensively.

“Gena has played different for us this year. She worked her butt off on defense and rebounding,” Weddle said. “Last year we depended on her for scoring. If she was not scoring, we were in the dumps. This year we have a better overall offensive team and she’s done other things like she did tonight to help us win.”

“I don’t know much about Pikeville, but I will,” Weddle said. “We’ll celebrate tonight, take Sunday off and then get back at it to be ready for Pikeville.”