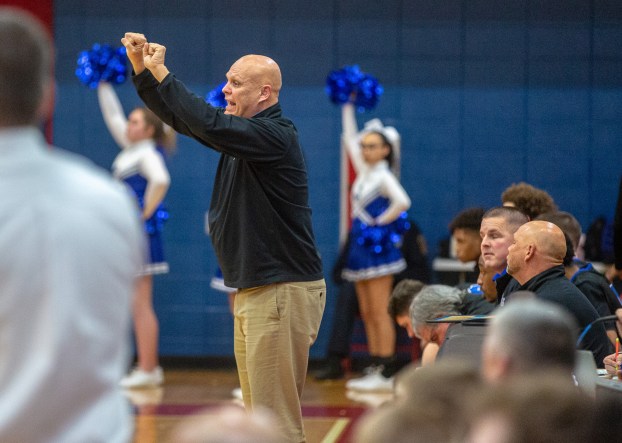 Danville buckled down and played through less-than-stellar shooting to seal a win again Wayne County last week in the first round of the 12th Region Boys Basketball Tournament.

The Admirals beat Wayne 70-60 to advance; they face Somerset in the semifinals tonight at Pulaski County.

Admiral Head Coach Ed McKinney said his team got off to a good start Thursday.

“Defensively, we had good intensity and executed what we wanted to do,” he said.

“Trey (Dawson) and Aden (Slone) did a good job attacking the basket late and we got some easy ones and got some big stops,” McKinney said. “Trey really scored the ball when we needed it late. We didn’t shoot the ball particularly well, and that made it a little more satisfying to me because we kind of grinded out the win.”

McKinney said perfect shooting from the free-throw line — 14 of 14 — was also “obviously a huge part of the win.”

“We got good play from all of our starters, with four guys in double figures and Darrian (Bell) (with) 9 and another double-figure rebound game,” McKinney said. “… Also, Damion Givens-Ford played really well and gave us a spark on offense. And Dante (Hayden) hit a huge 3 late to kind of seal the game.”

It was a “good win over a good program and great coach,” McKinney said. “Coach (Rodney) Woods is sixth all-time in wins in Kentucky and first among active coaches, and he has 12th Region titles. I have great respect for him as a coach and the classy way he goes about his business.”

McKinney said Somerset will be a “tough test” for the Admirals tonight.

By LARRY VAUGHT Contributing writer STANFORD — One week after losing 47-37 to Rockcastle County in the 47th District title... read more