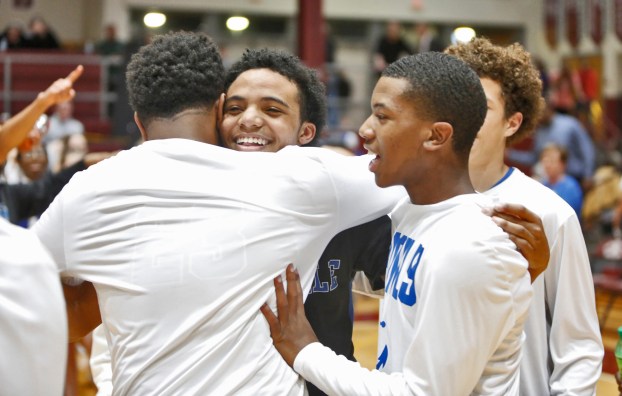 Jalen Dunn of Danville celebrates with teammates his game-winning shot that gave the Admirals a 66-64 victory over Somerset in a 12th Region Tournament semifinal Monday. (Photo by Mike Marsee)

SOMERSET – Like every other basketball player, Jalen Dunn has practiced his share of game-winning shots. But not this shot. 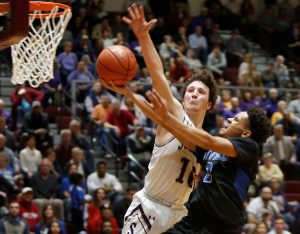 Trey Dawson of Danville puts up a shot under the outstretched arm of Somerset’s Dylan Burton (10) during the fourth quarter. (Photo by Mike Marsee)

The buzzer-beaters of Dunn’s dreams were probably pull-up 3-pointers or drives to the basket, but it was a simple put-back that put Danville into the finals of the boys 12th Region Tournament — and gave him a moment he’ll always remember.

Dunn put himself in the right place at the right time for the buzzer-beating rebound basket that lifted the Admirals over Somerset 66-64 in a regional semifinal Monday night at Pulaski County.

The sophomore guard said it was easily the biggest shot of his basketball life, but he admitted it wasn’t one he had worked on in his driveway or in open gym.

The shot was exactly what Danville (23-12) needed to reach the regional final for the second consecutive year, after the Admirals squandered an 18-point first-half lead. 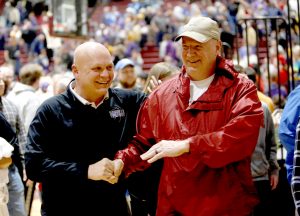 The Admirals, who were runners-up to Lincoln County last year, will play West Jessamine for a spot in the state tournament at 7 p.m. Tuesday.

“It’s awesome,” Dunn said. “Just getting the championship, that’s all we’re focused on.”

Danville eked out its first win over Somerset (26-6) in three tries this season after opening a 28-10 lead early in the second quarter. The Admirals saw their lead shrink in the third quarter and disappear completely in the fourth as the Briar Jumpers got hot from 3-point range.

“We gutted it out, found a way to do it,” Danville coach Ed McKinney said. 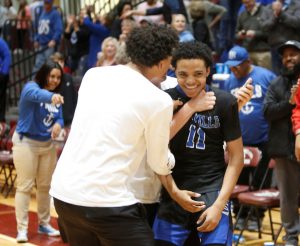 Jalen Dunn of Danville celebrates his game-winning shot that gave the Admirals a 66-64 victory over Somerset in a 12th Region Tournament semifinal Monday. (Photo by Mike Marsee)

The winning play developed out of a Danville timeout with 12 seconds left. When Trey Dawson drove into the lane, Dunn was deep in the left corner. As Dawson shot, Dunn raced along the baseline, passed beneath the basket and was waiting on the right side when the ball came off the rim.

“The last thing we said — and every coach knows this — you win these games on a tip, outside the first shot, usually,” McKinney said. “We said that coming out of the timeout: ‘Go rebound.’ That’s really why we left Jalen in, because he had done a nice job.”

“Coach had already told me during the timeout to crash the boards. You know, he’s a tremendous coach, so I’ve got to listen to him,” Dunn laughed and said.

Dunn did as he’d been told, and no Somerset player put a body on him. 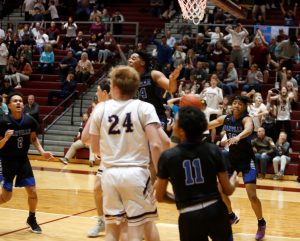 Danville players celebrate as a shot by Jalen Dunn (11) falls through the basket as time expires, giving the Admirals a 66-64 victory over Somerset in a 12th Region Tournament semifinal Monday. (Photo by Mike Marsee)

There was plenty of time for a put-back; the horn sounded as the ball came out of the net.

McKinney said the 5-7 Dunn displayed his knack for hanging in the air a little longer than most players.

“It’s uncanny, really,” McKinney said. “For a kid his size, you don’t see it. He’s got a little something special. It’s kind of hard to put your finger on what it is, but when a kid can do it, he can do it. He hangs in the air for a long time and holds the ball, and guys are coming down and he’s still up there finishing.”

Dunn had eight points and five rebounds, and he got six of Danville’s 14 points in the fourth quarter.

Dawson scored 16 points, Aden Slone had 13 and Dante Hayden had 11 for the Admirals.

Hayden opened the game with three 3-point baskets as Danville raced to a 9-1 lead that grew to 21-8 when Darrian Bell and Damien Givens-Ford gave the Admirals eight straight points at the end of the first quarter and 28-10 when Dawson hit a 3 with 5:50 left in the first half. 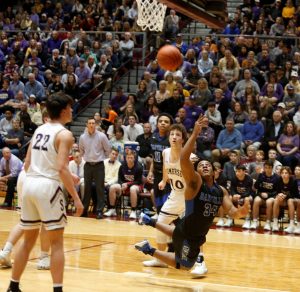 Darrian Bell (34) throws up an off-balance shot that went in during the first quarter as Somerset’s Dylan Burton (10) looks on. (Photo by Mike Marsee)

Danville led 39-22 when the second half began, but Somerset opened the third quarter with an 11-1 run that included three 3s. The Jumpers went on to go 8 for 13 from 3-point range in the second half.

The Admirals led 61-51 with 3:14 remaining, but Somerset scored six straight points and 11 of the next 14 to pull within two points, and Jase Bruner’s layup with 52 seconds left tied the game for the first time at 64-all.

Danville will try to win its first regional championship since 1990 against a West Jessamine team that defeated the Admirals 67-49 on Dec. 10 in Nicholasville.

“They looked physical; they shot it in. The big kid in the middle (center Gavin Salva) is really a load, and then (DeAjuan) Stepp gives them a whole ’nother dimension,” McKinney said. “If they shoot it like they did tonight, we’ll be in trouble. But I’d rather have a shot than not, right?”