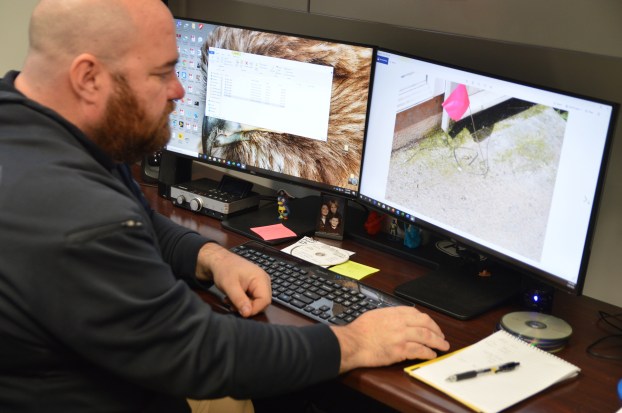 Editor’s note: This is the second part of a series on the ABC pawn shop murder case overview with Danville Police Maj. Kevin Peel, the lead detective on the case. This story contains descriptions of the crime scene, which may seem graphic to some readers.

“We had no fingerprints, we had no DNA, we had nothing.”

That was Maj. Kevin Peel’s take on where the case stood in the early investigation phase of the murder of Mike and Angela Hockensmith and Dan Smith, in September of 2013.

During the last Danville PD’s Citizen Academy, Peel gave an overview as lead detective on the case, and exactly what it took to solve it, resulting in a plea deal from murderer Kenneth Allen Keith. The murders happened at the former ABC pawn shop in Danville, owned by the Hockensmiths.

“Our witness was an 8-year-old boy who was in shock, who gave us good information, but at the same time — how much of that was going to change over a couple of days? Because we knew we’d go back and talk to him again,” Peel said about Andrew Hockensmith, who called 911 after witnessing the murders. Andrew had taken his infant sister into a backroom to shield her when his parents were shot.

News of the incident spread rapidly around Danville and surrounding areas, so calls were coming in with multiple leads about suspicious individuals being seen walking through town.

Peel was asked about when authorities decided to issue a lockdown for schools and area government offices, but he said the police department did not do that.

“Word of mouth, maybe? We knew fairly quickly that there wasn’t someone on the loose locally. As far as I’m aware, we never put out an official lockdown, so we’re not sure how that happened.”

Asst. Chief Glenn Doan chimed in about the chaotic scene processing, and how authorities were dealing with huge amounts of calls. “We continued to get calls of a suspicious person here. Everybody became suspicious because the public didn’t know what we had, where the person may be — is this someone on the loose? Is it an active shooter situation?” Doan said.

He said calls came in for several hours about people walking down the street. “If you wore camo and walked down the street, it would get called in,” Doan said, because a description of the suspect police wanted for the murders included that he was wearing a camouflage jacket.

Peel described the amount of leads and tips that were called in for days on end as overwhelming. Due to the calls, he spent the next Saturday going from jail to jail, “Frankfort, Versailles, Lexington, Scott County — people were calling in, people who were in jail, saying, ‘That sounds like my brother; he needs money because he’s on drugs; if I give you a tip can you help me?’” Peel said. He said they had to act on all of the tips regardless of how credible they sounded.

However, some help arrived. He said due to the relationship the department has with others, units from the Kentucky State Police and the Bureau of Alcohol, Tobacco, Firearms and Explosives (ATF) arrived, providing back up.

“They just showed up and said, ‘Hey, what can I do?’” Peel said. “Throughout the entire investigation, they were critical to what we did, for manpower reasons and resources. When we went to Somerset to serve warrants, we took an RV with us. I bet we had 60 people between ATF agents, troopers, Somerset PD — it was just amazing.”

But before they could serve those warrants, there was an incredible amount of work that had to be done.

Peel said autopsies of the victims were performed six days after the murder. “We knew that each of the victims had multiple gunshot wounds, but we didn’t know to what extent.”

“Something that was kind of strange — we noticed on Angie — she had one wound right here, in the center of her chest, that was bigger than a .22. You could tell it was not a .22 caliber round,” Peel said.

Going back to Andrew and his interview, Peel said Detective A.J. Mullins had conducted the first one 30 minutes after the incident happened. “And to watch it, it’s amazing — the information he gave and the accuracy, to have that just have happened 30 minutes prior to talking to him.” 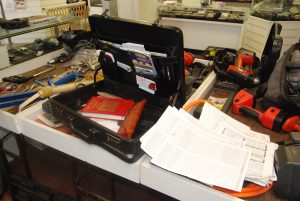 An evidence photo shows gold broker Dan Smith’s briefcase inside of ABC pawn shop after the 2013 triple murder of Smith, and owners Michael and Angela Hockensmith. The briefcase and items found from it would later prove to tie Kenneth Allen Keith to the murder scene. (Photo courtesy of Danville PD)

Then, Andrew took his sister to the back room, where one of the more disturbing parts of the story comes into play.

“He could hear his mom pleading with the shooter not to kill her babies, so we feel like Angie may have not have died as a result of that initial .22 round, even though it was shot to her head.”

Peel said Andrew described the first shots he heard as coming from “a magic dart gun, or a fake air gun, is what he would say,” and made the sound effect as an example, similar to how a gun sounds with a silencer. “But, he said ‘there were five at the end that made me blink.’ We thought that was strange, because we saw this one round, the autopsy confirmed — after being shot with a .22, Mike was shot three times in the head with a .38 or .357, something of that caliber. Dan was shot once in the head, and Angie was shot directly through the heart.”

Peel said something they never got an answer to is, “Did he come prepared to do that? Did he bring a silencer weapon and something that was more powerful? Did he have a worry that one of them would survive and recognize him, then went back after they were down and shot them again?”

The autopsies confirmed two different calibers of bullets recovered from their bodies.

“As we started looking into the victim’s backgrounds, I was familiar with the Hockensmiths just from going into the pawn shop because of working here at the PD. Didn’t know them personally or much about them, as far as their social life. I didn’t know Dan Smith, period.”

Back to the day they were originally on the scene, Peel said calls came in from local pawn dealers, indicating it had to be someone targeting Smith. They were told he always carried $100,000 in cash and followed the same routine each week, so it would be easy to know where he’s going to be at any given time.

“As we got into it, it was perfectly clear that (Smith) kept a travel log with all his mileage, and every Friday, he was in Danville at 9 a.m., in Harrodsburg at 8:30 a.m., every day for years. The same thing, over and over,” Peel said.

He said while they are trained to never make an assumption, that’s what it started to look like — that this was a robbery that somehow went bad. They knew the Hockensmiths both carried guns while they were at work, and they knew that Smith carried as well.” So the possibility of the shooter coming in and one of them attempting to confront him, starting a gun battle that was one-sided, seemed logical. “That was our first thought.”

Authorities continued to follow leads that came in, but none of the leads were developing into anything more. There was one suspect who was named and had an active warrant. Peel said he fit the description somewhat, so he, an ATF agent and KSP detective were literally walking out the door to go try and find him.

Then the phone rang. It was Tracy Herald — a pastor in Warren, Michigan. He began talking to Peel, and was very upset.

“He started talking to me about Kenneth Allen Keith,” Peel said. “We were all familiar with him because he used to own King’s Corner pawn shop … After he sold that business, he started ABC and would eventually give up control and ownership to someone else and leave.”

Keith had already been on their list to speak to, because he knew all three victims. But they had no reason, at first, to think he had any kind of motive.

Coming up: How authorities were able to figure out a motive behind the triple murder, and what ultimately cracked case against Keith.