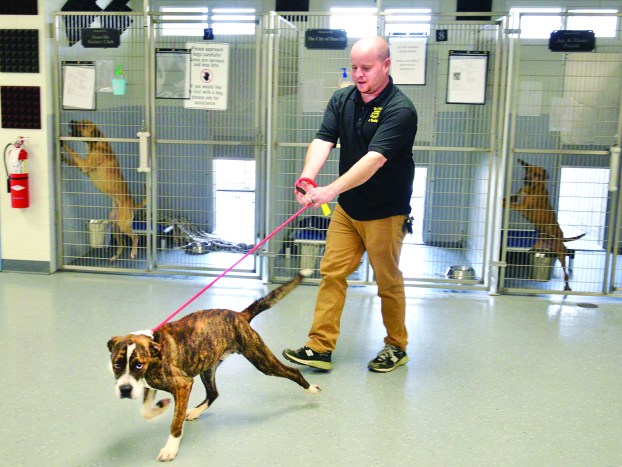 Boyle County Animal Control Officer Jacob Wardrip takes Chance, who is currently available for adoption,  out for a romp in the animal shelter’s play yard for dogs. (Photo by Robin Hart)

There are no typical days for an animal control officer. 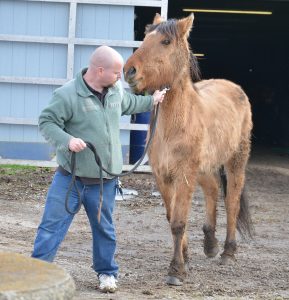 One day, Boyle County Animal Control Officer Jacob Wardrip may be taking dogs and cats to a veterinarian for surgery, and the next, helping to rescue dozens of neglected horses, like he did recently in two ongoing cases.

Wardrip has been an AC officer for nearly a year and a half and it’s a job he truly loves. He’s been in the military and worked in corrections and factory settings. “That wasn’t for me,” he said.

He likes helping the neglected and lost animals in the community. Wardrip checks on animal welfare situations and takes them when necessary. He also captures stray dogs and takes them to the shelter.

A welfare check he recently attended to involved two people who were living out of their van, he said. The couple was arrested for public intoxication while they were out walking between Walmart and Lowe’s. Officers discovered their two dogs were also living in the van.

Wardrip said the dogs were in great shape and didn’t appear to be neglected, but he had to take them to the shelter since the owners were taken to jail.

“They took better care of their dogs than themselves,” he said. And he was glad when they came to retrieve their pets after being released.

Wardrip is also called out to help get cattle and horses out of the road.

The recent situation with rescued horses off a local farm, which resulted in two women being charged with animal cruelty, had Wardrip, along with AC Officer James Goode, leading sick and neglected horses from a barn into a field where they were given hay and water. “I’ve learned more about horses in the past two weeks,” than he ever thought he would need to know, he said while sitting behind his desk at the animal shelter on the bypass.

He said he’s not really comfortable around horses since he fell off of one and broke both arms when he was about 14.

The toughest part of his job is, “Seeing the crazy stuff people do, all the negative stuff” people do to animals.

But he also sees how many people truly care about animals, whether it’s their pets or for animals and shelters in need. 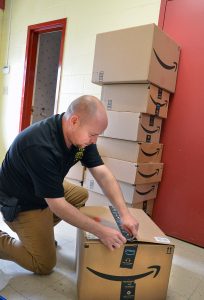 For example, he saw how people cared when he had to go to the post office twice and pick up shipments from total strangers who had ordered supplies through Amazon Prime and sent them to the shelter. On Saturday, he picked up 30 boxes, and on Tuesday, he picked up 35 more shipments of cat litter, cat food, litter boxes and toys people had sent to them.

“Funding is a little bit tight right now,” Wardrip said, and people are making generous donations to help care for the dogs, cats and now 31 horses.

Wardrip said he’s always been “a dog person.” He’s got four dogs at home. And five cats just showed up and stayed, he said. Working at the shelter has “kind of changed my mind about cats,” he added.

Wardrip also answers calls from people who want to know about the shelter’s spay and neuter services for feral and community cats. Spay/neuter services are provided for free to Boyle County residents practicing trap, neuter and return which requires them to trap the cat and get it to the vet. Rabies, FVRCP vaccinations and ear tipping is included.

Shelter Director Christina Lombardo said if you see a neighborhood cat prowling around and it has a “tipped ear,” you know they’re fixed. 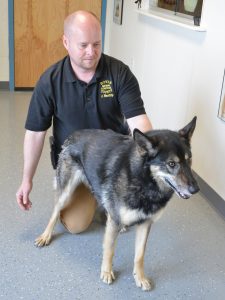 Wardrip says Bonnie is his buddy and would keep her if he didn’t already have four dogs. (Photo by Robin Hart)

While checking on the dogs that are available for adoption, Wardrip brought Bonnie out of the kennel. “She’s my buddy,” he said smiling and petting her.

Looking at Bonnie, Wardrip said, “I would take you home in a heartbeat if I didn’t have four other dogs.”

The Danville Board of Education will not be the fiscal agent for Wilderness Trace Child Development Center (WTCDC) for the... read more