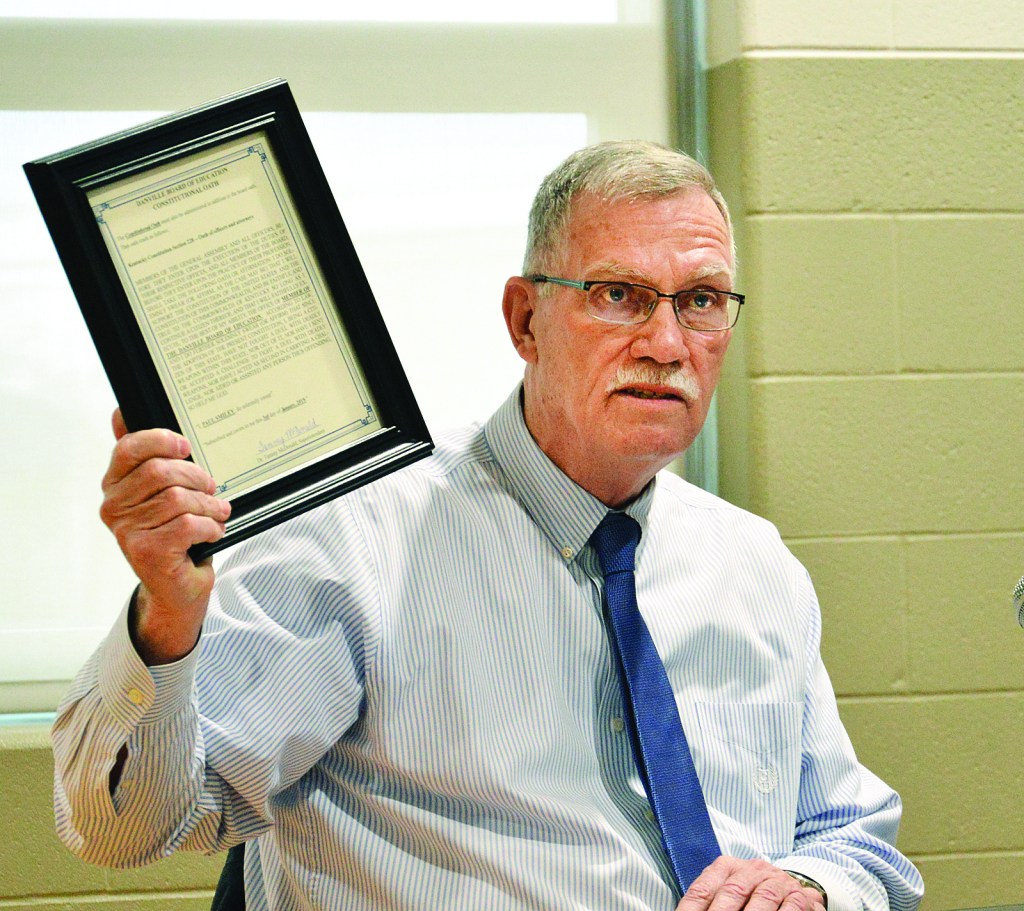 Danville School Board member Paul Smiley holds up a copy of the oath he took when he became a board member. He said he keeps the oath “to remind us to do our duties faithfully all the time.” (Photo by Robin Hart)

The Danville Board of Education will not be the fiscal agent for Wilderness Trace Child Development Center (WTCDC) for the next school year, despite being threatened by legal action from the center.

At Monday night’s special called meeting, the board voted unanimously to end the memorandum of agreement through which Danville Schools has provided teachers and staff, and the center has reimbursed the district for salaries and an administrative fee. The current MOA will end June 30.

The arrangement between Danville Schools and WTCDC has been in place for more than 20 years. Several people stood up Monday and asked the board to consider continuing as the center’s fiscal agent.

Diane Thompson-Will, a physical therapist at the center, asked the board if it would be possible to modify the MOA with Danville with terms that could be negotiated “in order to alleviate your concerns regarding the financial risks.”

She said last week’s meeting between WTCDC and Danville school officials to begin working out a solution “became heated, and Mr. (Steve) Becker (school board chair) asked us to leave.”

“We understand Danville has the right (to end the MOA). We just wish at the beginning of this school year, when the superintendent (Dr. Tammy McDonald) met with the (WTCDC) board president (Mary Covell), she would have said that she didn’t think this was working anymore. The (center’s) board would have looked at new partners at that time.”

WTCDC Assistant Director Tonia Darnell said she “wanted to address the falsehoods in the superintendent’s presentation.” McDonald previously said she attempted to set up meetings with WTCDC leaders to discuss issues related to the MOA, but the center had canceled those meetings.

Darnell said, “You guys never asked us to collaborate” about finding a solution before McDonald recommended ending the relationship at the school board meeting on Feb. 10.

Board member Paul Smiley made the motion to end the MOA and Glen Ball seconded.

Smiley said he believed all of the information McDonald presented to the board when she recommended ending the relationship was accurate. He said WTCDC board members and officials “didn’t show up for meetings,” and the constant negative statements being made “impacts against us.”

Plus, “We have been threatened with a lawsuit more than once. … It’s been really disappointing,” Smiley said. “… I think Mr. Becker did the right thing the other day. We were starting to talk, then boom — ‘We’re going to sue you.’ We had heard that before. It does not create an environment to move forward.”

According to public records, the amount borrowed against the school building was $125,000.

Board member Lori Finke said over the past two weeks, she had talked to current and previous board members “on both sides” and asked questions. “It seems that this relationship hasn’t been perfect for a long time. It’s on both sides. We have an increasing set of rules because we’re such a big institution, and we are a state-run place, and we have rules that don’t make your lives easier.”

Becker said the board has not taken the decision to end the relationship with WTCDC lightly. He said there have been “roadblocks” because of legal advice given to the center.

“We were just getting started to have that dialog last week, and then the attorneys told the board they had hired a private investigator and would probably take them to court,” Becker said.

Through an open records request, The Advocate-Messenger acquired a Feb. 14 letter from WTCDC attorney Mark Wohlander to McDonald.

“At this time, we would encourage you to reconsider the proposal to end your relationship as the fiscal agent for the center,” Wohlander wrote. “In the event the board decides to move forward with the proposal, it is our opinion that it will result in significant harm to the preschool children served at the Wilderness Trace Child Development Center, including Danville Independent students and would violate the American with Disabilities Act.

“As such, it may be necessary to request assistance from the United States Department of Education, the United States Department of Justice Office of Civil Rights and the Kentucky Department of Education to investigate and assist with this matter. And it ultimately might be necessary to file a federal civil action on behalf of the children who will be the victims of any decision which would deny them an equal opportunity to a preschool education.”

“That could have been a bunch of bull,” Becker said. “But we’re not allowed to take that as just words. We have to abide by what we know about this district and also about legal ramifications. It’s very serious.”

Before taking a roll call vote from the board, Becker said, “I’m not sure we could ever rebuild a relationship based upon a lot of distrust, and based on things that have been said. Our superintendent got a threatening letter from your attorney. It affected everybody. I’m just sad and horrified that any of this took place.”

On Tuesday, WTCDC Executive Director Libby Suttles wrote in an email to The Advocate-Messenger that the center does have a mortgage on its building.

“We began a line of credit last year to ease the financial constraints we have experienced due to a reduction in resources for children with special needs, two grant opportunities ending, and to accommodate raises by Danville School staff that were unexpected by the center,” she wrote.

Suttles added, “With everything said, we would just like to reiterate that so much of the drama surrounding early education options for children could have been avoided by a planned meeting to address the current memorandum of agreement.”

The WTCDC Board of Directors will be meeting on Saturday for a “strategic planning session to explore opportunities” for the center, Suttles said.

“Parents living within Danville School District will still be able to choose WTCDC as a preschool through a private pay option of $280 per month or possible scholarship funding for qualified families, thanks to Heart of Kentucky United Way funding,” Suttles said. “We currently work with families regarding educational and therapy supports that would cater to the child’s specific needs.”

Currently WTCDC provides contracted preschool services with Lincoln, Boyle and Danville school systems. There are 45 children enrolled, according to Suttles.

Beginning next school year, Danville Schools will not be contracting with the center, McDonald said.

She said that with the renovation of the Hogsett Primary School — and its expanded space to include specialized teachers, equipment and a sensory room — all preschool children within the district who have special needs and disabilities can now be served.

McDonald said the new facility is prepared to address children’s needs for physical, speech and occupational therapies. However, “A parent has the choice to send their child there (WTCDC) like any other private school provider,” McDonald said.