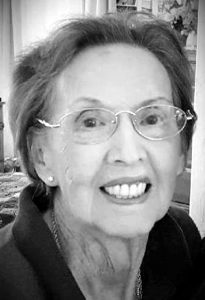 Lillian Douglas Brown, 89, formerly of Liberty, passed away peacefully, with her three sons present, on February 29, 2020 after a brief illness at the Florida Medical Center in Fort Lauderdale, Florida.

Born on October 16, 1930, on Grove Ridge in Casey County, KY, she was the daughter of the late Willie T. Douglas and Della Frederick Douglas.

She was pre-deceased by her husband of 62 years, Charles W. Brown.

Together with Charles, she built and owned the Brown Motel in Liberty, and greatly enjoyed watching it flourish as the Bedford Inn, under new ownership.

According to her wishes, her remains will be transported to her hometown of Liberty, KY for burial in Glenwood Cemetery, beside her husband Charles. Visitation will be held on Monday, March 16, 2020 at Noon, at the First Baptist Church in Liberty, with funeral service at 2 PM the same day; graveside interment to follow. Bro. Jimmy Brown will officiate.