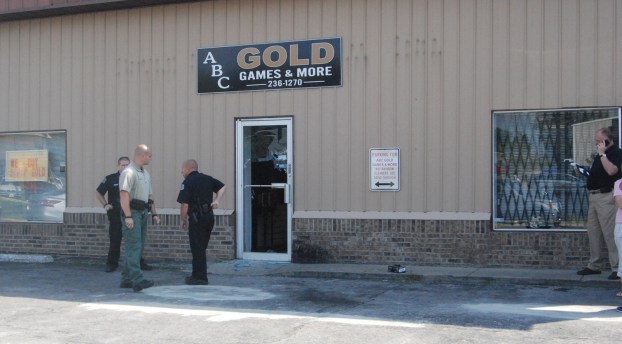 Authorities gather outside the ABC pawn shop in September of 2013 after three people were killed there. They are, from left, Ofc. Hobie Daugherty, Boyle County Sherrif Dep. Casey McCoy, Asst. Chief Glenn Doan and Kentucky State Police Det. Monte Owens. Maj. Kevin Peel, who was the lead Danville detective on the case, said help from other law enforcement agencies proved to be paramount to the case. (Photo courtesy of Danville PD)

Editor’s note: This is the fourth part in a series on a case overview of the ABC pawn shop murders in Danville, with lead detective, Maj. Kevin Peel.

Although authorities didn’t have him pinpointed as a suspect right away in the ABC pawn shop murders of Michael and Angela Goldsmith and Dan Smith, a phone call from Kenneth Allen Keith’s pastor friend raised many red flags.

Keith would eventually take a deal for life in prison without parole in exchange for his guilty plea. But before that, investigator Major Kevin Peel with the Danville Police Department said Keith had methodically created what he thought was an airtight alibi for that September 2013 day in question.

On a bizarre phone conversation with a pastor friend in Michigan, who called him about the murders, Keith told him exactly where he was throughout the day, down to the minutes. After the friend contacted local authorities and retold his conversation, Peel, the lead detective on the case, went with his gut instincts.

“We had contact via US Marshals the entire time he was on vacation,” Peel said. Keith had made sure to tell his friend on the phone call that he had his van detailed due to a family trip planned to Florida that next weekend.

After looking into Keith for about three weeks, Danville arranged with some ATF agents to do some recordings of phone calls between Keith and the Michigan pastor, Tracy Herald. The only rule was Herald was not legally allowed to ask Keith anything directly, “like ‘did you kill them?’” Peel said. “He could talk to him about anything, but couldn’t do anything we’d ask — it’s called being an agent of the police, and can be considered entrapment.”

He said the two calls they recorded “were insane,” and that Herald didn’t have to prompt Keith at all. “He was telling Herald he knew he was going to prison, and his daughter was going to grow up without him. He told Tracy exactly how many times each victim had been shot, and that had never been made public in any way. That was the last bit of information we needed to get the arrest warrant signed,” Peel said. 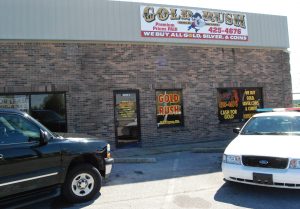 On Oct. 9, 2013, less than a month from the day of the triple murder, “that small army I told you about — us, with Kentucky State Police and ATF — we all loaded up together” to go to Somerset to execute three search warrants, and they purposely did so all at the same time. They served one on Gold Rush, Keith’s pawn business; one at his church, where his office was located; and one at the church’s parsonage, where his family was living at the time.

Peel and a KSP detective went to the business, where Keith was alone. They went in nonchalantly, acting as if they were customers at first.

“He finally came out from around back,” Peel said. “It was pretty tense for a while, because he knew we had cameras, and I knew that he knew me.”

Not to mention, there were several guns in the business.

But Peel said as soon as Keith came out, they confronted him and took him without incident. “He didn’t struggle at all. Within his reach were six pistols, including one on his hip,” he said.

Once in custody, Keith was taken to the Somerset Police Department, where Peel and KSP Det. Monte Owens interviewed him. Meanwhile, teams were still at other locations and would relay information to Peel and Owens as they found it, while they were still in the interview.

They interviewed Keith for two hours; he never confessed. But Peel said he gave a lot of information and “said a lot of really strange things.” For instance, Keith had told a lot of people he was a Green Beret or in special forces when he was younger, which has been disproven.

“During the interview, we asked him about taking a polygraph, what his thoughts were. He said, ‘I don’t know because I know you’re going to ask me that question.’ I said, ‘What question?’ He said, ‘Ask me if I’ve ever killed anyone.’ He said ‘yes, I’ve killed three people.’”

But then Keith told Peel, “‘It’s not what you think.’ He said when he was in special forces, he got airdropped into Guatemala and killed three people in a village … He was trying so hard to convince us that we were wrong, even though we were confronting him about all that we were finding in evidence, and it was like he didn’t believe us. It was very strange,” Peel said.

He also asked Peel and Owens if they had someone following him while he was on the beach, the trip he took with his family the weekend after the murders. Peel said they were in contact with US Marshals in Florida while Keith was there.

Tilting his head and giving a doubtful look, Peel said. “I thought, well surely, (the US Marshals) would’ve done better than that …”

Keith finally ended the interview by asking for his attorney. Earlier on, Keith had asked for a can of soda, which Peel noticed he never drank throughout the interview.

As officers came to escort him back to his cell, he took the soda with him. Then as Peel and Owens began to go over the information, “an officer said, ‘Your prisoner is bleeding.’” As they got closer to Keith’s cell, Peel said they heard a scuffle going on.

“He’d emptied the can, smashed it and tried to slice his throat in the holding cell. When we asked him why, he said it was because he wasn’t a preacher anymore and he didn’t want to die in prison.”

Back in Keith’s Gold Rush pawn shop, Guns were found that matched the caliber of bullets used in the murders. They recovered $134,000 in cash, presumably all from Smith’s briefcase. And behind the business, there were spent .22 shell cases, as well as more .22 cases inside the business.

“Later, we did ballistic tests and found them to be a match and all fired from the same weapon — the same gun fired those bullets that fired the ones on the scene (at ABC in Danville).”

Paperwork was retrieved showing the lease agreement Keith made with the ABC building owner, that the owners wouldn’t sue him if Keith agreed to give up his business.

The only thing authorities were not able to locate was the actual gun. “We had the gloves we found tested, but they didn’t come back with any DNA. We think he was wearing those because Andrew said he had on black gloves.”

Peel said an AR15 golf-ball launcher was found on the front counter of Keith’s Somerset pawn shop. “An ATF agent pointed to it and said, ‘there’s your silencer,’” tying together how Andrew had described some of the shots as sounding like an air gun.

Peel said the contraption is a steel tube normally used to screw onto the end of a rifle, load it with blanks and it will shoot a golf ball. “It’s a novelty thing,” he said. But it screws right on, and doesn’t have to be modified.

This tied into the Hockensmith’s son, Andrew’s account of the gun being “‘really long … he said the end of it was twice as thick … we showed him a picture of it, he said, ‘That’s it.’ He’d already drawn a picture of it. It was incredible he was able to focus on that.”

Coming up: How Keith planned his crime, and more information about his multiple lives comes to light.

In a move to “stop the hemorrhaging,” Danville City Commission unanimously passed the first reading of an insurance premium tax... read more