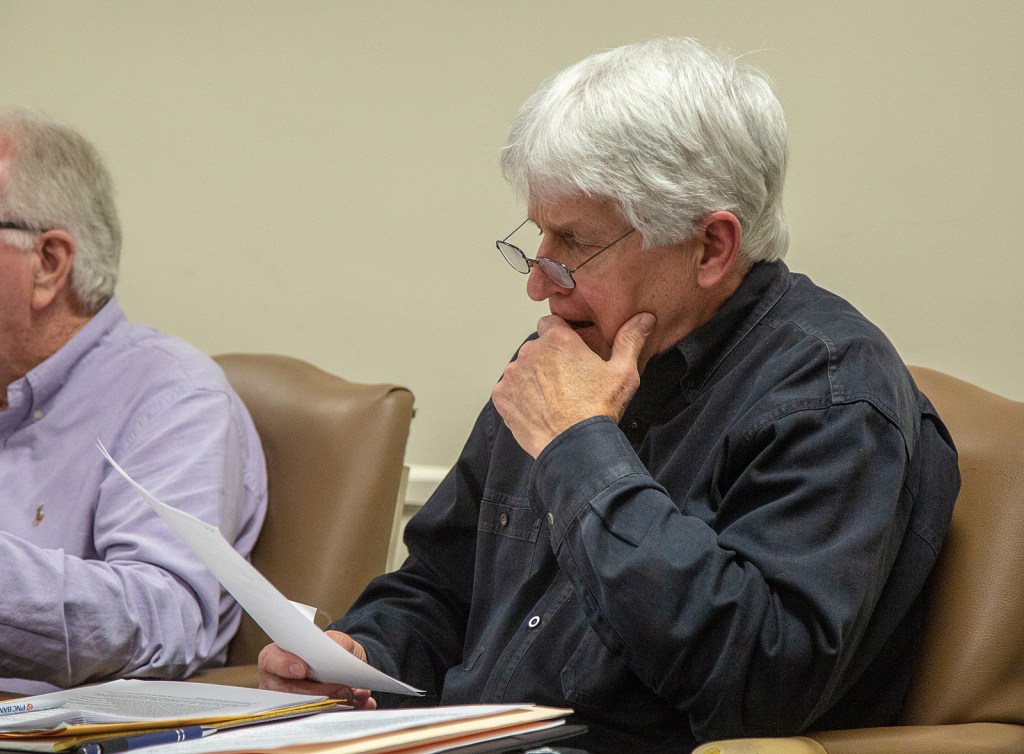 Boyle County Magistrate Tom Ellis was the only "no" vote against a new agreement with the Boyle County Soil Conservation District. (Photo by Ben Kleppinger)

Boyle County Fiscal Court approved a new agreement with the Boyle County Soil Conservation District Tuesday that paves the way for the county to begin picking up dead animals that have been piling up on farms since February.

Magistrates voted 5-1 to approve the agreement, under which the conservation district will provide up to $70,000 annually to help cover the costs of dead animal removal. Anything beyond that $70,000 would have to come from the county’s general fund.

In the first year, $30,000 of that amount would come in the form of a vehicle for dead animal removal that was originally gifted to the county by the conservation district, according to county officials.

That leaves $40,000 in conservation district funding that would be available “on demand” as needed to cover county costs, Judge-Executive Howard Hunt said.

The county also approved a job description for a driver to transport dead animals and approved posting the job. It could take two weeks to get someone hired.

Initially, the driver will be taking dead animals to the Tri-K landfill in Lincoln County, Hunt said. The county has not yet moved forward on a potentially cheaper plan to compost the animals at the Perryville Convenience Center, he said.

Magistrate Tom Ellis voted against the agreement. During discussion, he said he took issue with the vehicle initially being presented as a gift, and now being considered $30,000 of the conservation district’s $70,000 contribution. He said the “gift” has “become a burden on the taxpayer.”

Ellis also tried to bring up the issue of composting at the convenience center — a plan opposed by some who live in Perryville. But Hunt wouldn’t allow it.

“We all have our constituents to listen to, and we do,” Hunt told Ellis. “This is about the agreement between the court and the district.”

Magistrate Jason Cullen asked if any dead animals had been removed from Boyle County farms since Jan. 31, when the company that used to provide the service went out of business.

“Eight horses and that’s it,” Hunt responded, referring to horses removed from a north Boyle County farm that is part of a pair of ongoing animal cruelty cases. “We don’t have an approved driver to do this.”

Last year, the conservation district removed around 1,900 large animals from Boyle County farms, at a cost of $23 per head. Prices with the old company no longer in the picture are running at least $80 a head — a price the conservation district has said it can’t afford with its current tax rate, and if it is to continue to providing other services more central to its mission of helping all farmers.