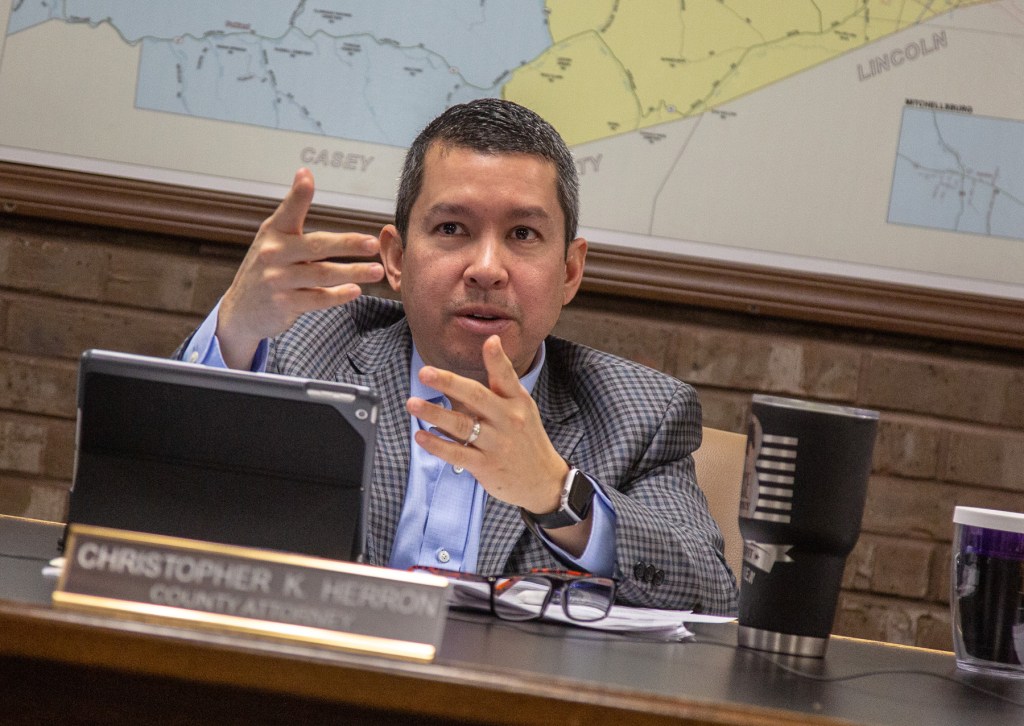 Boyle County Attorney Chris Herron presents the fiscal court with options on how to proceed concerning a new road in the Hunt Farm subdivision at Tuesday's meeting. (Photo by Ben Kleppinger)

The Boyle County Fiscal Court plans to ask Circuit Judge Darren Peckler for a ruling on whether it can refuse to accept a new road in the Hunt Farm subdivision into the county maintenance system.

Magistrates voted unanimously Tuesday to seek a declaratory judgment from Peckler concerning a long-standing county ordinance that requires more than half of homes on a new road to be occupied before the county accepts the road. The move deviates from the path recommended by County Attorney Chris Herron, but is an alternative Herron offered.

Joedy Sharpe, the developer of the Hunt Farm subdivision, recently completed a new road that will provide access for up to 15 homes in a fourth phase of the development. He built the road to county standards and wants the county to accept it, meaning the county would be responsible for maintenance and clearing snow. But none of the 15 homes have been built yet.

Sharpe built the road with the approval of the Danville-Boyle County Planning and Zoning Commission, which has its own requirements for new roads, including that the developer provide a one-year warranty. But in January, magistrates and P&Z Director Steve Hunter disagreed about the legality of the county ordinance, which has been on the books since 1988.

Hunter said at the time that state law requires any road built to required P&Z standards to be accepted into the county road system within 45 days; magistrates said they worry doing that would ultimately mean taxpayers would foot the bill for damage done to the road by construction equipment traveling in and out to build the homes.

The fiscal court asked County Attorney Chris Herron to analyze the county ordinance and state law, and come back with a recommendation. On Tuesday, Herron recommended the fiscal court accept the new road, but also ask the P&Z Commission to modify its regulations and essentially adopt the county’s old 51% occupancy rule as its own.

But Herron also provided two other options: stick to the county ordinance and reject the road, or ask Peckler for a declaratory judgment.

If the county rejected the road, Herron said he predicts there would be a lawsuit filed by the developer, and the county would run a risk of losing in court.

“They could say, ‘No, Planning and Zoning is in charge and you lose,'” he said.

Seeking a declaratory judgment essentially means the county would ask for an answer from the court system before any legal action is taken. Herron said that process could take a long time — perhaps even more than a year. 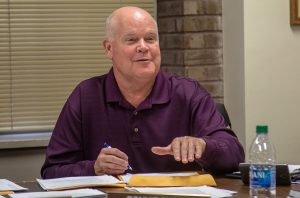 Magistrate Jamey Gay explains how he believes a local ordinance requiring 51% occupancy on a new road before the county takes the road into its system may trump other, less strict requirements. (Photo by Ben Kleppinger)

Magistrate Jamey Gay said other phases of the Hunt Farm development have been handled with the 51% occupancy rule in place; Hunter said Sharpe believed with the new P&Z zoning ordinance in place as of late last year, the 51% rule was no longer in effect.

Gay also noted that there’s a P&Z regulation that says wherever there’s disagreement between P&Z regs and other ordinances or laws, the strictest of the conflicting standards should be followed. He argued Boyle County’s 51% occupancy rule was stricter than P&Z’s rules.

Hunter said Sharpe would argue the stricter-standard rule applies to standards of construction, not to whether a road built to those standards is accepted.

Gay ultimately made the motion to seek a declaratory judgment from Peckler.

During discussion of the motion, Magistrate Phil Sammons said he thought the fiscal court was “missing the point.” He said magistrates were discussing the matter with “professionals” — Hunter and Herron, as well as Boyle County Engineer Duane Campbell — and the professionals were offering recommendations on what to do.

“We don’t know diddly squat about what’s going on with these roads,” Sammons said. “I think we need to take their recommendation.”

But Gay’s motion passed unanimously, with Sammons voting in favor.