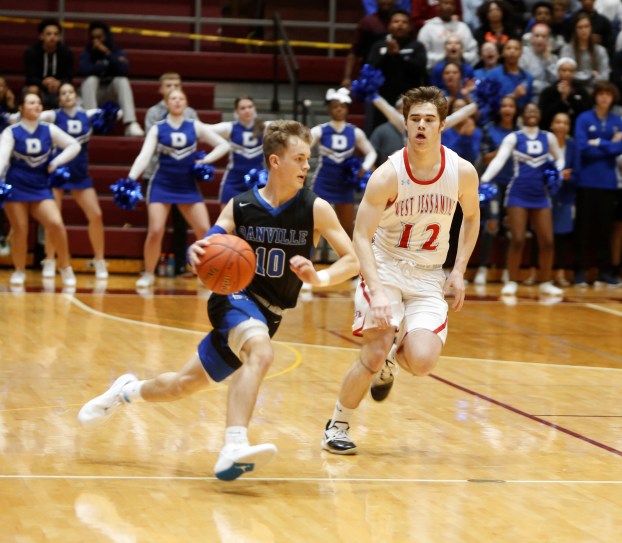 Aden Slone (10) of Danville drives up the floor against West Jessamine’s Jackson Greene during the first quarter of the Admirals’ 78-64 loss in the boys 12th Region Tournament championhip Tuesday. (Photo by Mike Marsee)

SOMERSET — Two strong starts carried Danville into the regional final, but there would not be a third. 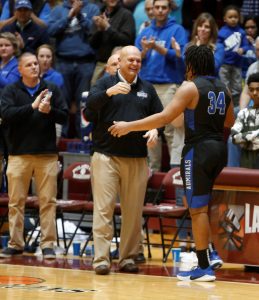 The Admirals faced an uphill battle Tuesday night after they fell behind early in the game, as shots that fell in the first two rounds of the boys 12th Region Tournament wouldn’t go down in the first half Tuesday.

They battled back, but could never quite catch West Jessamine, which dealt them a 78-64 defeat in the championship game at Pulaski County.

Danville erased most of a double-digit deficit to pull within three points early in the fourth quarter but got no closer, and that spelled the end for a team that improved over the course of the season to reach the regional finals for the second consecutive year.

Thirty years have now passed since the Admirals last reached the Boys Sweet 16, and they were once again stopped one step short of Rupp Arena.

“Every team is special to you, but this is a tougher one because we had a lot of guys assume new roles. It takes a while to get going (when that happens), but I thought by the end of the year we were a hard out,” Danville coach Ed McKinney said. “Beyond that, they’re just real good kids. That’s what makes it harder.” 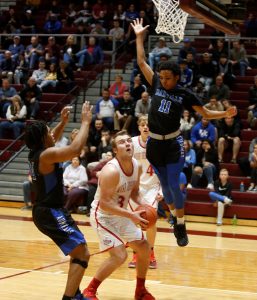 Jalen Dunn (11) and Darrian Bell of Danville try to stop a shot by West Jessamine’s Clayton Winter during the second quarter of the Admirals’ 78-64 loss in the boys 12th Region Tournament championhip Tuesday. (Photo by Mike Marsee)

The Admirals had gotten the jump on Wayne County and Somerset in their first two regional games, but on Tuesday it was West Jessamine (21-11) that raced to an early lead. Danville’s first four shots from the field were all 3-point attempts and all misses, and it opened 0 for 6 from long range and fell behind 7-2.

“We just missed some shots,” McKinney said “I thought we got the same shots against Somerset, and in the same kind of environment. They just went in.”

Danville fell behind 23-13 early in the second quarter and trailed 33-22 before scoring the final five points of the first half.

West Jessamine took its largest lead at 47-35 midway through the third quarter, but the Admirals responded with seven straight points on a three-point play by Darrian Bell and baskets off turnovers by Trey Dawson and Aden Slone. 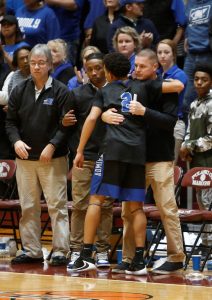 The Colts pushed their lead back to nine, but the Admirals scored six straight points and pulled within 54-51 on a layup by Jalen Dunn following an acrobat in-bounds save by Bell.

“We battled back like that when we could’ve easily hung our heads and been happy with where we are,” McKinney said.

Danville got two chances to further cut into the deficit or perhaps tie the game but was unable to convert, and West Jessamine got back-to-back layups by DeAjuan Stepp and Jackson Green to launch a 14-5 run that dealt a death blow to the Admirals, leaving them trailing 68-56 with 1:58 to play.

“When we cut it down to three there, we had a couple opportunities. You’ve just got to make some shots,” McKinney said.

Dawson and Bell, both seniors, scored 18 and 16 points in their final game for Danville. Slone also scored 16 points, and Bell had 14 rebounds. 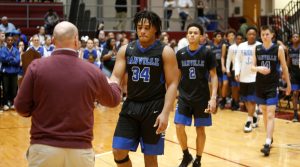 The Colts controlled the boards, out-rebounding the Admirals 45-26 with 12 offensive rebounds.

McKinney said this Danville team leaves an impressive legacy even without a championship.

“We’ve won 52 games in two years, and we’ve gone to back-to-back regional finals. I can’t remember a Danville team that’s done that,” he said. “(Seniors) Darrian and Trey and Damien (Givens-Ford) are just solid … and Nick (Price-Hancock) didn’t get to play as much as he wanted, and he never griped. He’s over there on the bench yelling. They’re unselfish.

“And we’ve got a good core coming back, but we’ve got to work on getting some bigs.”

SOMERSET – Like every other basketball player, Jalen Dunn has practiced his share of game-winning shots. But not this shot.... read more