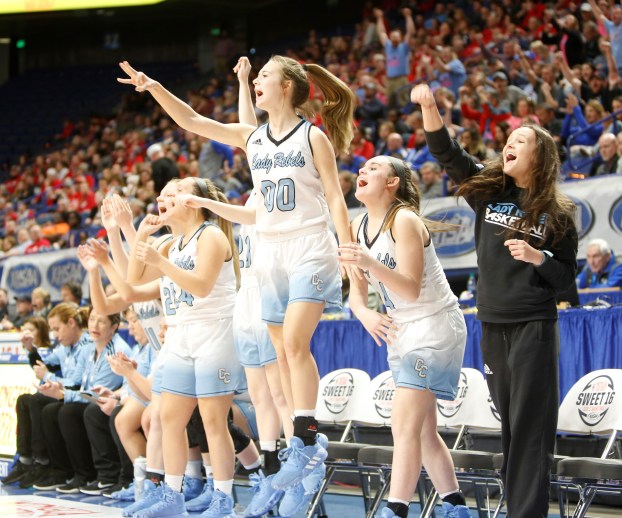 Madison Chansler (00) and other Casey County players on the bench react to a basket during the fourth quarter. (Photo by Mike Marsee)

Lady Rebels hold on for 3-point victory over Pikeville

LEXINGTON — Nerves? Oh, yeah. Stress? You betcha. But when push came to shove, the Casey County girls would not be denied. 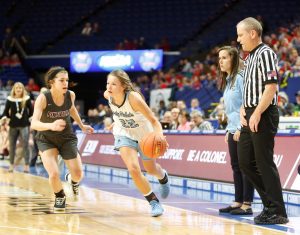 Gena Cravens (22) of Casey County drives toward the basket against Pikeville’s Trinity Rowe as Casey coach Tara Weddle and an official look on. (Photo by Mike Marsee)

Lauren Lee made sure of that Wednesday night when she blocked a potential game-tying shot with two seconds remaining to give the Lady Rebels a 49-46 victory over Pikeville in the first round of the KHSAA Girls Sweet 16 at Rupp Arena.

Casey had seen a double-digit lead dwindle to a single point midway through the fourth quarter, but the Lady Rebels overcame both Pikeville’s comeback attempt and their own case of state tournament jitters to extend their stay in their first state tournament appearance since 2009.

“I think the court and this experience really took us by shock, and we were shell-shocked for most of the game,” Casey coach Tara Weddle said. “We’re a much better team, I feel like, than what we displayed tonight.”

Casey (28-7) will get the chance to prove that Friday when the Rebels return to Rupp Arena for a 1:30 p.m. quarterfinal game against Anderson County, which beat Franklin County 40-37 on Wednesday. 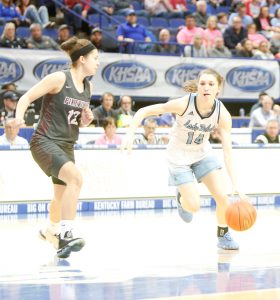 Lee’s blocked shot prevented Pikeville (26-8) from completing a comeback attempt that brought the Lady Panthers almost all the way back from the 12-point deficit they faced just before halftime.

She had sunk two free throws with 17 seconds left to give Casey a 49-46, and she was at the head of the defense as Pikeville tried to create a 3-point shot that would tie the game.

“It wasn’t really, ‘We have to play lockdown D.’ It was more like, ‘We can’t let them shoot a 3’ because that’s what they were looking for and that’s what they needed to tie it,” Lee said. “So honestly, what I was focused on was just pushing them off the 3-point line. If they wanted to blow by, it’s not the best, but let them have that (because) we’d still be ahead.”

Lee got her right hand on the shot by Kelsey Jo Tackett and the ball bounced out of bounds as the horn sounded, setting off a celebration on the Casey bench and among its pink-shirted fans, who made up a large portion of the Rupp Arena crowd.

Jordyn Stephens scored 16 points and Lee added 15 for Casey, which is making its third appearance in the Girls Sweet 16.

Nerves may have played a part in Casey’s chilly shooting. The Lady Rebels shot 50 percent overall from the field and were just 2 for 11 in the third quarter. 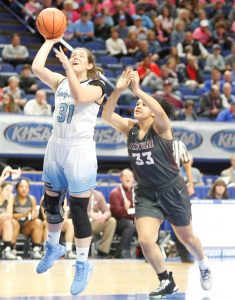 Haley Brock (31) of Casey County gets past Pikeville’s Kirsten Cole-Williamson for a layup during the first quarter. (Photo by Mike Marsee)

However, they made hay on the offensive glass, getting 11 of their 25 rebounds off their own missed shots despite being outsized. All four of Shaylah Wilkey’s rebounds and three of Haley Brock’s four were offensive boards.

“We try to focus a lot on doing little things such as rebounding the ball, taking care of the ball,” Weddle said. “We’ve played teams all year that have been bigger than us, so we know that we have to put a body on somebody and move somebody. And a rebound just comes down to who wants it more.”

Casey help Pikeville scoreless for a span of 3:51 late in the first half while the Lady Rebels took their largest lead at 29-17.

The Lady Panthers pulled within five points in the third quarter and kept coming, cutting the nine-point lead Casey rebuilt early in the fourth quarter to a single point at 43-42 on jumper by Kirsten Cole-Williamson with 3:34 to play.

The Lady Rebels milked the clock for much of the next two minutes, which guard Gena Cravens said isn’t as easy with a one-point lead as it is when the margin is larger.

“It’s stressful. We just focus on not turning over the ball. We have had that play forever and we’ve got it down to a T,” Cravens said. 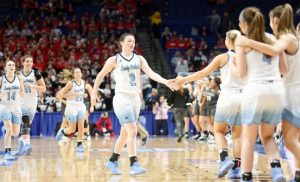 “And Tara never uses all of her timeouts, so at the end of the game we know if we get into a tough situation we have plenty,” Lee added.

Pikeville got one shot to take the lead following a Casey turnover with 57 seconds left, but a shot by Tackett hit the side of the backboard. Two free throws by Jordyn Stephens then gave Casey a 47-44 lead at :32, but Rowe answered with two for Pikeville.

It isn’t clear whether Casey’s fans – or anyone else’s – will be allowed to return to Rupp Arena for Friday’s quarterfinal. As professional leagues, college conferences and the NCAA call off games or opt to play them in empty arenas, KHSAA commissioner Julian Tackett said a meeting Thursday will result in what he hopes will be a final call concerning games Friday through Sunday in this tournament and next week’s Boys Sweet 16.

Tackett said playing the tournaments without fans or with a limited audience would be preferable to not playing at all, and he said postponing the games is probably not an option.

SOMERSET — Two strong starts carried Danville into the regional final, but there would not be a third. Danville coach... read more