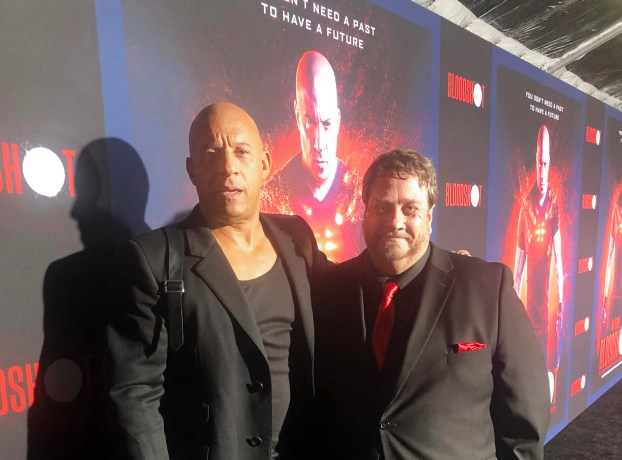 A front-page story from The Advocate-Messenger on Jan. 27, 1983, reads “Young artist hopes to take comic book world by storm.” It was about a Boyle County High School senior who had been accepted into a DC Comics workshop.

The senior was Kevin VanHook, who just this week walked the carpet at the world premiere of “Bloodshot,” a feature film spawned by a comic book he wrote 27 years ago. The movie opened nationwide this week, a first in what’s intended to be a series made from the Valiant Comics character of the same name. It stars well-known actors, including Vin Diesel, Sam Heughan and Guy Pearce.

VanHook says his high school years and his connections made while here have greatly affected his life. While living in Boyle County, he met Roger McKenzie, a writer for DC and Marvel comics out of Lexington, who became a mentor to him.

McKenzie encouraged him, taking him to New York in ‘83 so he could show his work to comic book companies. “I was always in a hurry. I was ready to be working, have a life and be an adult when I was about 12.”

VanHook got a rare “in” with some companies, but he also got rejected along the way. With those rejections came a lot of feedback, which he took to heart; he ended up working professionally for a comic book company by that summer.

“I tended to work for companies that ended up having financial problems and going out of business, suspending publications and not paying me for a couple of years,” he says.

He started his own company in ‘89, but eventually began working for Valiant as a production manager, writing and drawing. He co-created “Bloodshot” while there, with Bob Layton and Don Perlin. It was the company’s biggest success, selling over a million copies.

“Don is now 91. He had been in the business for a long time, so I got a big kick out of seeing this happen for him, as I did for me. It was his biggest thing. Back then, here was this guy, in his 60s, getting paid to go to comic shows and sign autographs. It was great.”

Perlin was the artist for “Bloodshot,” while Layton was editor in chief of Valiant Comics.

VanHook said those were great days for the comic book industry; it was booming. “Valiant was the first one I’d been a part of that clearly had business people involved. It wasn’t just creative people, but people who understood the economics and advertising.” The comics had legitimate ads that helped offset the costs of publishing; they weren’t just relying on sales from the books themselves.

“We also used a specialty printing process for the cover — chromium. That cover, just because it was so unique, so novel, helped us sell that advance number we did. The quality of the book, I can say humbly, is what kept people buying it, month after month.”

But Valiant was bought out by a video company, with the idea of becoming a character creation outlet, immediately changing things. Ultimately, that company filed bankruptcy, taking “Bloodshot” with it.

“It sat in bankruptcy for a number of years, until they were bought out of it and having the rights to publish the characters again, but didn’t have the money. They didn’t do anything until they raised substantial capital, then relaunched all the IPs (intellectual properties) in 2012. ‘Bloodshot’ was one of the most successful, and they approached Hollywood about optioning the rights.”

VanHook said he got a call “as early as 2013, saying there’s going to be a movie, it’s going to happen. I’d get excited, then nothing happened.”

Although he kept his hand in comics, occasionally writing for DC, VanHook has been a filmmaker for the last 25 years. A couple of years ago it was announced, he said, that Sony was moving forward using the same production company that’s behind “The Fast and the Furious” franchise, and they wanted to go with Diesel as the lead.

“Once that was announced, it was real, then fairly quickly, I was given a chance to see where they were going with the script. Next thing I knew, I was on set in South Africa with Bob (Layton) and the cast. They were very open and welcoming, and treated us very nicely as the creators of the original concept.” VanHook got the opportunity to see the trailers of the film and give his opinion. 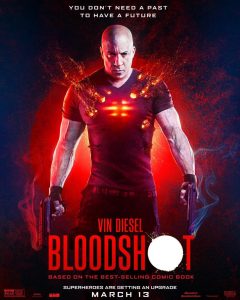 The main character in the story is assassinated with his wife, then brought back to life by a team of scientists. With nanotechnology, he becomes superhuman and a killing machine, but struggles to remember his past, because his memory has been wiped clean. Eventually, he regains some memory, and breaks out of the facility he’s kept in to seek revenge on the man who killed him and his wife, but realizes there’s more to the story of what happened to him.

“It’s very cool. Over the years, I’ve been fortunate to work on great projects, but this is the largest associated with something I’ve created. It’s been a great experience; fascinating from a number of levels, from a filmmaker to be on set with this big of a project — it’s different, but at the end of the day, it’s not that different. Their money went towards many many days and the casting, plus post-production. Seems to be the primary difference between a $2-$3 million film and a $100 million film.”

VanHook said the character has evolved over the years. “If you did read the original comics, you’d recognize a lot of the same stories; thematically, it’s still the same. One of the conversations we had with Vin was trying to convey the idea of what the themes were. As far as I’m concerned — loyalty and friendship and atonement, more than anything else.” 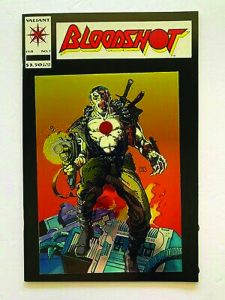 Bloodshot, the comic book series created by Kevin VanHook, has been turned into a feature film which premieres Friday.

The ‘83 article describes how VanHook and “another student, Kenny Pflug” printed and sold a 20-page, black and white comic book while in school. Pflug is the newly retired Danville Fire chief.

Although VanHook has been out of the area for many years, he still has many connections here, Pflug being one of them. “Ken was my high school best friend. He’s someone I’ve stayed close with over the years,” VanHook said.

Another local person who had an impact on his life was Louatha Cheese, VanHook’s English teacher at Boyle. “She was and still is very supportive of me … I’ve ended up seeing her a couple of times over the years when she was (in California) on vacation, or I was out there. Very kind that she remembers who the heck I am; from her side, she’s seen thousands of students, while I only had one English teacher.”

Next on the list for VanHook is a pilot he wrote for a series, which his manager has begun to shop around. “It deals with an artistic savant who draws things from his photogenic memory, and draws a series of homicides that haven’t happened yet. We’ll see.”

The COVID-19 pandemic has caused Centre College to cancel all athletic competitions for the remainder of the school year.... read more