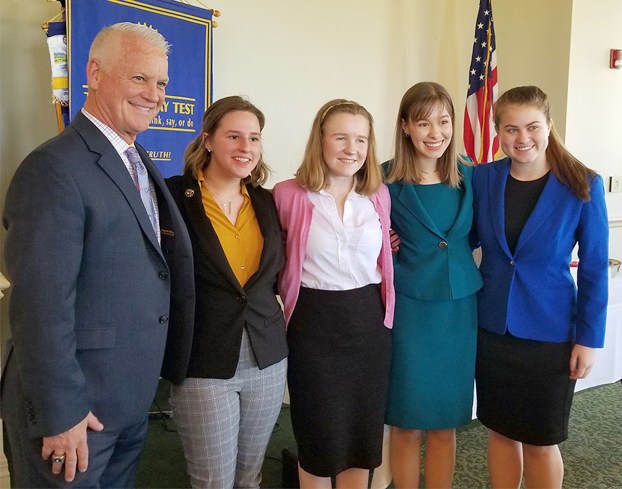 Four members of the DHS speech team, who recently won the Kentucky High School Speech League’s state tournament for the fourth year in a row, participated in Danville Rotary Club’s 2020 speech contest held at the Danville Country Club on Feb. 28. Future contests will be held at the sectional, regional and district levels. District finals will be held in Bowling Green on May 16, The first place winner at each level will advance.

The 2020 contest topic is “Connecting with the World through Leadership and Service.” Each participant is tasked to address how Rotary International’s six areas of service (Peace, Disease prevention, Water and sanitation, Child health, Education and literacy and Economic/community development) have influenced their life and future plans. Prizes of $300, $200 and $100 were awarded. The winners will proceed to the sectional, regional and District 6710’s finals. Prizes at each level increase to $1,000, $500 and $500 at the District 6710 finals.

The first place winner, Alexis Weathers, is a junior at DHS. Alexis began by sharing her panic and then “epiphany”  that brought her preparation into focus. She chose to look at ways that we can all expand the services available to people in the racially conflicted and economically struggling areas of the world. To help drive home her message, Alexis shared an example of one Rotarian’s personal efforts to make a difference in the lives of a racial minority in a poor economic community.

Joe Williams, a Rotary member since 1996, grew up in New Mexico close to a community of Navajo Indians. Williams saw Navajo children living without electric lights (kerosene lanterns) or running water. As an adult, he committed to providing solar panels to those living on the reservation. Alexis was strongly impacted by a picture of Williams holding  an elderly woman expressing her appreciation for the relief she had received from respiratory problems and having toilets with running water.

The second place winner was Samantha Sallee who is a senior at DHS. Samantha began by sharing her interest in learning from the events and people that she encounters daily. The preparation for her speech brought new and powerful insights to the ways that Rotary is making a difference in the lives of people around the world. She was drawn to the, “incredible diversity of humanity that Rotarians experience on uniquely personal levels that forge lasting ties throughout this ever more divided world. I hope that each of you has felt as if you’ve connected with me in the past few minutes, and if not, I would love to have a follow up conversation to speak on a more personal level,” she said.

Virginia Harp, a senior at DHS, was the third place winner and aspires to become a lawyer.  Virginia began by noting her Rotarian audience was comprised of at least three generations. Virginia said she appreciated that Rotary clubs around the world were interested in making local high school students aware of the Rotary International’s commitment to make a difference in the lives of people across “our town, state, country and the world!  We can all probably all agree that it is time people everywhere focused more on respecting each other and valuing good ideas. So today, I will be talking about how Rotary has connected ideas of change, leadership in service, but also how it connects generations,” she said.

Megan Goosey, a junior at DHS, spoke about her thoughts on the power of connecting with other people. “To me, connection is an exchange of energy, ideas, thoughts, opinions, laughter, and memories. Healthcare is a popular topic today, but millions go without adequate health care (even in the U.S.). Rotary’s commitment to providing clean water, sanitation and hygiene is a great start! Even better are the pop up clinics, vaccinations, and teaching mothers how to breastfeed and care for their children. I plan to work in ways that provide basic education somewhere by training teachers, and mentor students,” she said.