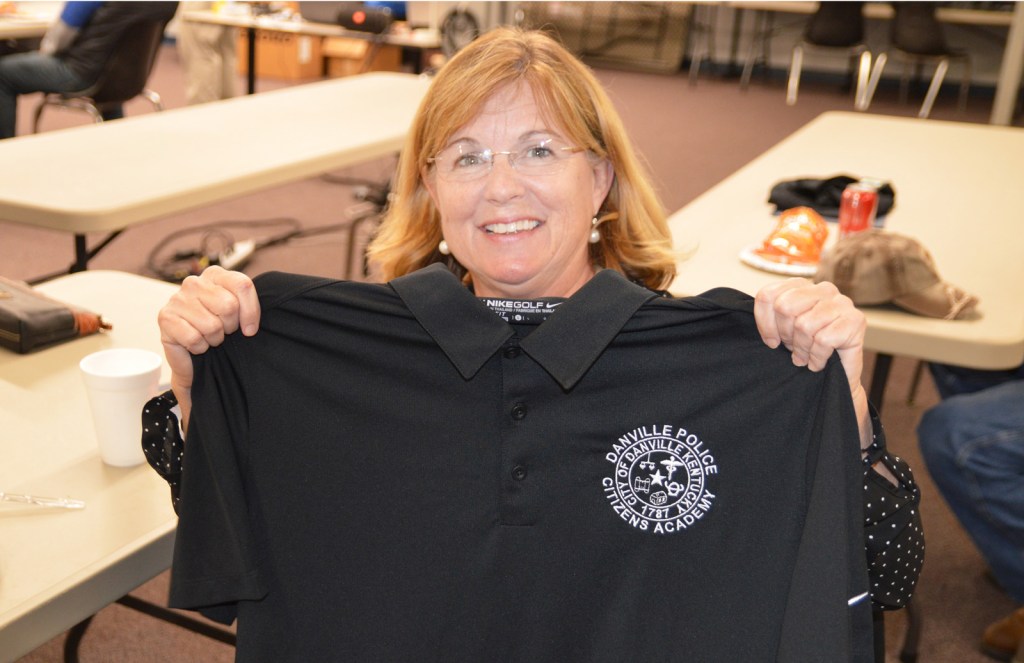 The ABC pawn shop murder case overview stemmed from a presentation given on graduation night during the last Danville Police Department Citizens Academy. Asst. Chief Glenn Doan says the detailed look into what goes into solving a murder case is just part of what those who attend can expect to participate in.

And citizens can get a chance to experience it all in the spring offering of the next academy, which begins May 11. Classes are held 6-8 p.m. every Tuesday, with the final class and graduation on Monday, June 8. The class is free to all Boyle County residents, and a meal and T-shirt are provided when participants get their certificates of completion.

Traditionally 10 weeks long, this will be a special, five-week long Citizens Academy — a condensed version of the course. Doan says, “What we want to do this time is offer it during a different time of the year, and as a shorter, spring academy for people who can’t commit for the full 10 weeks.”

Doan says he will be reviewing the course work to cut out some things that aren’t essential, or “the fluff that needs to be cut.” He says it will be more of a crash-course, but participants can still expect to get hands-on in different situations.

“They will still get to do the mock traffic stops, which seems to always be pretty eye-opening for people. They’ll participate in taser demonstrations and simunitions — where they perform deadly-force encounters; they will engage a suspect and actually shoot simunitions,” which is non-lethal training ammunition.

The interactive curriculum will also include a department overview; patrol activities; telecommunications; criminal investigations; use of force; active shooter training; and crime scene processing. Participants will complete police-related scenarios, including defensive tactics and other simulations.

“Overall, the biggest change will just be the pace of it. We don’t want to take a lot out, still want it to be very engaging and interactive,” Doan says.

Doan says the academy is important because “there’s a lot of misconceptions about what we do. This gives a glimpse inside the inner-workings of the department. It’s good for citizens to meet the officers who are here.” And, he says, a wide-range of personnel will interact with them, from the newest officers on the force to the veterans.

“Some people go their whole life without interacting with a police officer, or maybe only once, during a traffic stop — could’ve been a good experience, could’ve been bad. And this really shows what officers go through on a daily basis, and what we’re trying to accomplish here.”

Doan says past academy graduates are always amazed with what they learn. “There were great times and some shock value,” he says, especially when they got to experience footage from officers’ body cams, for example. “They saw some things they didn’t realize were going on in this community, and several things that officers experience on a daily basis that they were not aware of.”

He says the academy builds a connection between citizens and officers. “They see officers are human, and they’re just trying to do a job that’s very important, and difficult.”

Applications for the academy can be found on the city’s website, under the Police Department tab. They should be returned to gdoan@danvilleky.gov; faxed to (859) 936-1301; or can be dropped off at the PD.

The Danville Police Department Citizens Academy is offered free of charge to all Boyle County residents. The spring course will be offered 6-8 p.m. Tuesdays, beginning May 11, with graduation night on June 8. Classes are held in the training room of the PD. Applications can be downloaded by visiting www.danvilleky.org, and finding “Citizens Academy” under the Police Department tab; as well as on the PD’s Facebook page. For more information, email gdoan@danvilleky.gov, or call (859) 238-1224, ext. 2533.

Danville may collect its own payroll, net profits taxes