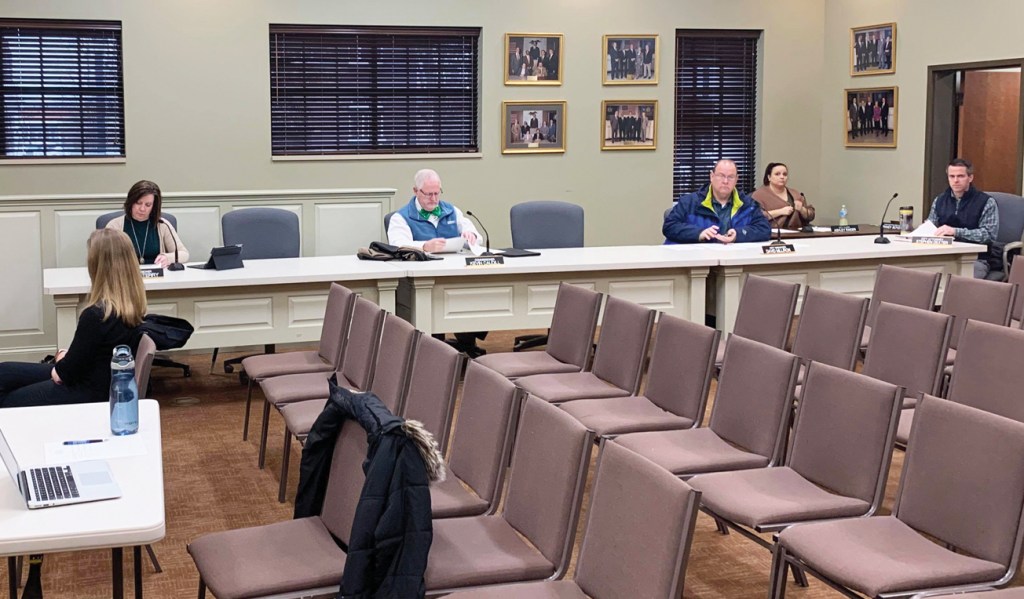 City commissioners, mayor and staff were spread out Tuesday morning during the emergency meeting, to follow social-distancing guidelines as a COVID-19 virus precaution. (Photo by Bobbie Curd)

Seated in a new social-distanced arranged quorum, Danville City Commission unanimously enacted a state of emergency for the city Tuesday morning during a special-called meeting. The city commission also took the opportunity to give a second reading to an ordinance increasing the insurance premiums tax from 8% to 10%.

“You will notice we are sitting in a much different arrangement than we have in the past, due to the unusual set of circumstances that we face,” Mayor Mike Perros said. He, along with Commissioners J.H. Atkins and Rick Serres, were a seat apart from each other up front, as Commissioners Kevin Caudill and Denise Terry were spread out along the staff table. 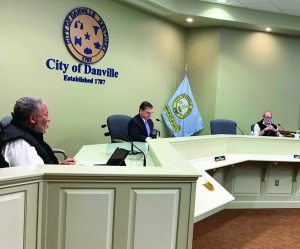 City commissioners, mayor and staff were spread out Tuesday morning during the emergency meeting, to follow social-distancing guidelines as a COVID-19 virus precaution. (Photo by Bobbie Curd)

An emergency ordinance and municipal order allowing City Manager David Milliron “to exercise emergency powers,” and establishing his “administrative authority” as city manager were both passed, “given emergency first and only reading.” Also passed was a resolution declaring a state of emergency.

The emergency order declaring Milliron to have emergency powers was needed, City Attorney Stephen Dexter explained, due to the wording of the Kentucky statute, since it only lists “mayor” or “mayor’s designee.” The municipal order lines out who else can sign documents and “obligate the city” in the absence of the city manager.

“So there are expanded emergency powers that are now conferred upon the city manager …” but in Milliron’s absense or inability to do so, the mayor may sign. In Perros’ absence or inability,  the mayor pro-tem may sign, then the list goes down to commissioners in alphabetical order who may sign as back-ups.

“In essence, this is kind of a designated-survivor type of documentation to provide who can sign and obligate the city in the event a signature is needed and the city manager cannot do it,” Dexter said.

When it came to approving the resolution to declare a state of emergency, Dexter said he would only add that it will stay in effect “and the powers that are instituted and conferred upon the city manager” until the state of emergency is declared to be over by the city commission.

“That declaration being by the governor of this state that it’s over?” Serres asked.

Dexter said, “I would think that you would act in conjunction with that.”

After Commissioners Atkins and Terry made the first and second motions, respectively, to pass the second reading of an insurance premiums tax increase, Commissioner Caudill asked about the deadline.

Milliron said the city has to “have this published and on file” by Monday, March 23.

At the last meeting, Milliron recommended the commission enact the increase from 8% to 10% in order to address pay for police, fire and 911 communications departments. These taxes are paid by all life, stock and mutual insurance companies doing business in Kentucky, and the move is expected to raise roughly $500,000 for the city.

Serres asked if that means the city commission meeting is canceled for Monday.

Milliron said until the city “is comfortable with guidance from the state” for online meetings, none will be held unless called for an emergency.

He said staff is testing technology that would allow up to 250 people to participate in an online meeting, with only the commission talking unless the public is recognized. But that will not go into effect until “we get guidance from the state, and conference with our city attorney …”

Caudill said, “It’s kind of an unusual situation, because I think there may have been some people who were going to come Monday, maybe, and speak to us about (the insurance premiums tax increase). But given the special set of circumstances, which are really beyond our control, I don’t know what else we can do at this point.”

Perros asked Milliron if the technology could be up and running by Monday; Milliron said no.

He said, “We haven’t tested it — the biggest issue is whether or not we can isolate the commission, make sure that you all have tested that your faces are seen, because you all will be remote. You will not be in city hall … and then figure out then how to communicate” with the public through some kind of platform for participation.

Milliron said the city only signed up for the specific account it will be using late last week, and the necessary webcams won’t be delivered until Friday. “We are very much trying to do what we can as quickly as we can, but we don’t even have the technology yet. I don’t even have that technology in my own office. We’re scrambling as quickly as we can to address that. I don’t think anyone foresaw that we would be in this situation, you know, even a week ago.”

Dexter said while it’s possible the Kentucky Attorney General’s Office may provide some guidance, “as you can well-imagine, open meetings and open records compliance is not a top priority of the Commonwealth at this point.” He said he expects the office to be “somewhat reactive to the problems that are raised, and I know they’re on their radar. As far as a list of priorities during a state of emergency, this is on the list, but not a front-burner issue.”

Milliron said this is why “we’ve been a lot more aggressive on making sure (city business) is being published on city hall’s Facebook” page.

Milliron said city administration has not received any pushback on the tax increase, and that they would be forwarded to the commission if so.

Only a handful of people were present for the meeting, with most of them being staff, but Perros did open up the floor for any comments on the tax increase, to which there were no takers.

Commissioner Atkins asked Caudill what concerns he was hearing on the tax.

“Just that it’s more money, and honestly I haven’t heard that many, but I’ve been here long enough to know that people usually don’t come in until the finish line, so …” Caudill said.

Mayor Perros said he wanted to take the opportunity to remind the public “of the designation of these funds. It’s going to go to our first responders.”

Caudill said, “I think that’s helped keep some of the concern down.”

City hall closed at noon Tuesday and is only accessible to staff. The city has also enacted an emergency operation center in the basement of the building.

“We will be open to the public via telephone, email, we have contact-us forms on our website at danvilleky.gov. We also, for utility payments, have drop-payments here,” Milliron said. Payments may also be made online at the city’s website.

He said the city has proactively made sure no additional utility cut-offs are occurring.
“We’ve also proactively been running around and turning back on those utilities for anyone that’s been disconnected in the height of this pandemic.”

Milliron said the city is doing what it can to protect those who will continue providing services to the public. “We’re in uncharted territory. This is an abundance of caution, but we have to keep our staff safe and healthy so we can continue to keep the government in operation.”

Public records were not discussed, but Milliron said during the 10 a.m. emergency press conference held at Boyle County Public Library that no open records requests would be processed while the city is operating under the emergency declaration.

Dexter said he wanted to circle back around to his “earlier comment about open meetings.”

“I can only state that staff will work to manage in the spirit of the open records and meeting law, to comply and act in as transparent of a way so that the public can view the development of public policy during the state of emergency — which is somewhat difficult and challenging.”

He added that by the ordinance enactment “and emergency powers” given to the city manager, “he will be the conduit of communication to business and the community, and we expect that communication to be high. And the staff will work in the transparency that’s allowed and expected under the law. We’re just in uncharted territories to figure out the best manner to do that.”