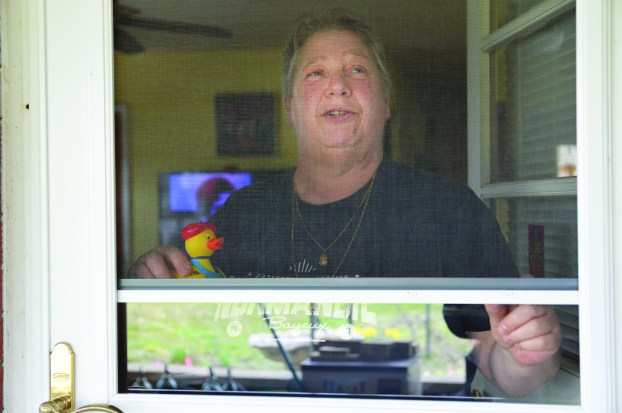 Donna Fechtor talks through her carport door of her Danville home Friday. She is in self-quarantine after her trip to France, and returning on a plane filled with students who had been studying abroad in Italy. They were not tested as they touched down in airports Friday. (Photo by Bobbie Curd)

Danville resident Donna Fechter and her friend Phyllis Passariello left for France on Feb. 27. It was a long-awaited trip that had been planned for sometime. But little did Fechter know taking the trip would result in a 14-day self-imposed quarantine, due to possible COVID-19 exposure, when she returned back to the states.

“We had heard about the virus as we were leaving, I think there was like one case in Italy at that time; it didn’t seem to be going anywhere yet,” she said via phone. Italy has been on lockdown; the country recently reported 368 coronavirus deaths in 24 hours.

Before those reports were surfacing, Fechter and her friend touched down in Paris. Then they realized something big was going on. 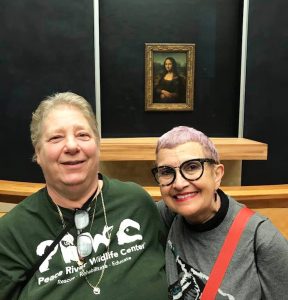 Danville residents Donna Fechtor and Phyllis Passariello pose together in front of the “Mona Lisa,” Leonardo da Vinci’s famous work hanging at the Louvre Museum. Crowds were slim everywhere they went in France, she says. Now the two women are back home in Danville and self-quarantined, after taking a flight out of Paris filled with students who had been studying abroad in Italy. (Submitted photo)

“We immediately went out to the Louvre (Museum), and not many people were there. My friend who is living there thought, ‘Wow, this is not crowded at all.’ We had such a great time and were able to get through so many museums. Then the next day we wake up to hear the Louvre is closed …”

Fechter and her friends kept to their plans, while also taking precautions. They spent three days in Bayeux, able to take in the Bayeux Tapestry — the oldest tapestry in the world that tells the “epic adventure” of William the Conqueror in 1066. Then, onto Normandy, to the Normandy American Cemetery and experiencing “Taps” while the flag came down.

“It was very cool and very emotional,” Fechter said. “The French people weren’t really coming out, so nothing was crowded.”

In fact, Fechter and her group had a tour guide all to themselves; the group was originally to be eight people, but they were the only ones who showed. “So we ended up having a nine-hour private tour,” hitting Sainte-Mère-Église and hearing stories about the paratroopers there during the World War II Normandy landings. The nearby town Mission Boston was one of the first liberated in the invasion.

They toured German bunkers, Utah Beach, then headed to Rouen, where the Joan of Arc Museum is. Once in Strasbourg, they shopped for food at outdoor markets, which weren’t crowded at all either, she said. “At this point, we’re hearing that a nearby town had the virus.”

They went on to the French Alps, and there was “hardly anyone up there,” but had fun in a tiny town, Annecy, known as “the pearl of the French Alps.”

“By this time, all hell is breaking loose. We get a call at 3 a.m., telling us President Trump is closing the borders, we better get out.” Fechter said they told their callers they already had a planned flight out the following day, but were urged to head back into Geneva and secure an immediate one.

“We had to catch a train from Geneva to Leone, then from there to Paris to get back to our hotel. We managed to do that.”

By the time they were able to take in all the information, “Trump’s presentation had been cleaned up, that it’s not the Americans (the travel ban affects) but he’s cutting off foreign nationals.”

When they first got back to their hotel in Paris, there was hardly anyone there. “Then all these Americans start coming in, they’re leaving, trying to get out.” Fechter’s friend, Passariello, contacted their airline about another flight and were told it would be a four-hour wait just to talk to someone.

“They didn’t call her back for nine hours. It was wild. Then President Macron makes a speech to the nation about 8 p.m. that night, which is six hours ahead here.”

“He was saying we know it’s hard, but we need to do it. Wash your hands, stay out of crowds, if you don’t need to go out then hunker down, work from home if you can. Watch out for the elderly — don’t go into their houses and don’t hang out with them if you think you might have something, but call them and see if they’re OK.”

Fechter said Macron “made me feel so good, because he was like let’s be sensible here. We’ve gone through things like this before — maybe not in our lifetime, but we’ve gotten through things like this before, and we’ll get through it again. … He just offered some common sense directions and it was very well done.”
When they got up the next morning, they were still worried about their plane. “We get there six or seven hours before to get our boarding pass. The de Gaulle wasn’t even crowded, either, at this point,” she said, referring to the Paris Charles de Gaulle airport. “Then all these students come in. We already know students study abroad, several were studying in Strasbourg through Centre.”

Fechter said once on the plane, she was surrounded by students. Then she began talking to them. “He said ‘we just left a program in Italy,’ and I said ‘OH, Italy …’” The students had to go through Amsterdam to get to France and then back home, she said.

“I felt like we were ahead of the virus everywhere we went, and here we are, on this plane, surrounded by students who were in Italy. We’re sitting around all of them. I’m like, oh my gosh — if we’re going to get it, here it is …”

As Fechter sat through the Friday flight, her mind raced. “I’m thinking they’ll take our temperature when we get off the plane. We felt fine, but didn’t want to hurt anyone else by being negligent. We get off, and they’re just herding us like cattle; all they cared about was our passports. I know at least five different people looked at mine. There was no testing, just getting us through.”

Fechter and her friend were amazed. They had thought there was a possibility that if they got tested when they touched down for Atlanta, they may not be able to catch their plane to Lexington. But no testing was being done yet.

“Today (Sunday), I’m reading that yesterday is when they finally put the testing together at the airports — at 12 or 13 international airports. I’ve read it takes about six hours for baggage, and four hours to be tested. I’m like, wow. They may be doing it, but they don’t have it together yet. But, at least now they’re testing — but they did not test us.”

Fechter said she and Passariello knew they were going to self-quarantine. “I hope everyone does it. I still would’ve done it, even if I hadn’t been sitting beside (all the students from Italy).”

She said as an almost-65-year-old, she is considered high risk and she does have a few medical issues. “You know, I’m better than most and not as good as others. But I don’t want to put myself in harm’s way, even though everything I have is manageable. And I get these students had to go home,” Fechter said, but there were babies and elderly people on the plane, as well.

Fechter has received many well-wishes on social media, as well as friends reaching out to see what she needs. “I can start cleaning my closets out. I made a list of things to do. And to pray for people that it doesn’t go anywhere, that the curve flattens out, that people are safe …” 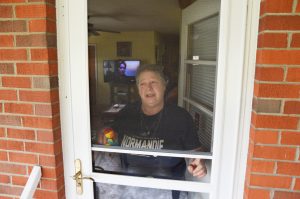 Donna Fechtor talks through her carport door of her Danville home Friday. She is in self-quarantine after her trip to France, and returning on a plane filled with students who had been studying abroad in Itlay. They were not tested as they touched down in airports Friday. (Photo by Bobbie Curd)

Also in the meantime, Fechter is catching up on her reading. “I’ve read two different things today that are comparing (COVID-19) to the 1918 Spanish flu. It was here, in Kentucky … That’s the last time we’ve ever had anything like this, and it’s very scary.”

She hopes communities are able to come together — well, without actually being together.

“Help a neighbor, help a friend. Make sure your neighbors are OK and call someone every day. Between the young people with families who have to work and all the elderly people we have here, I do worry.”

Fechter said, “You just do what you can do. I hope people watch out for each other. But — I just don’t get the whole toilet paper thing.”