Personal Affects: Bookends have been around for centuries

Question: Jerry, how do you like my bookends? They were my grandmother’s and I’ve always loved and played with them. I used to make up little stories about them and move them around on her shelf. Would they be worth much? Thank you for taking the time to look at them. 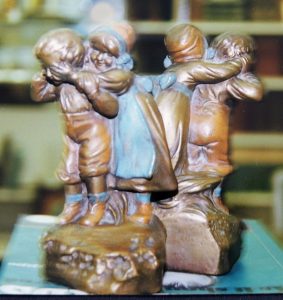 Answer: What a sweet pair of bookends. I can imagine that you had many, happy hours creating stories with them. Bookends have been around since people could afford books. More than two anyway. Most of the earliest were the basic of basic, a block of wood, a lump of stone.

Fancy folk would have had something in brass or well-finished cast iron. Incidentally, those bookends that you used to see in libraries, the thin metal kind with the hole in the middle, were actually patented in 1877

middle class was gaining wealth and possessions. Bookends weren’t just to hold your books. They were there to showcase your fine books, by standing them up. And boy, did the styles roll. I don’t think there is anything, given time and effort, that you can’t find in the world of bookends.

Let’s talk about yours. I love the design of little boy and girl with her covering his eyes up. These date to the mid to late 1900s. Though there were a number of factories in America that made bookends, I suspect that this could have been made by the Bronzeart Company. Bronzeart was a large company with a large output, but there is little information on the company. They ceased production in the 1930s.

that washed or were wiped off. Speaking of washing, be careful with these because the blue highlights were cold painted. Cold painted means that it was painted after the metal was cold. It’s prone to chipping and wear.

Naturally, I love bookends since I own a bookstore. I think at a nice antiques shop or a good show, this sweet pair would be priced for about $70. Thanks for sharing them with us.