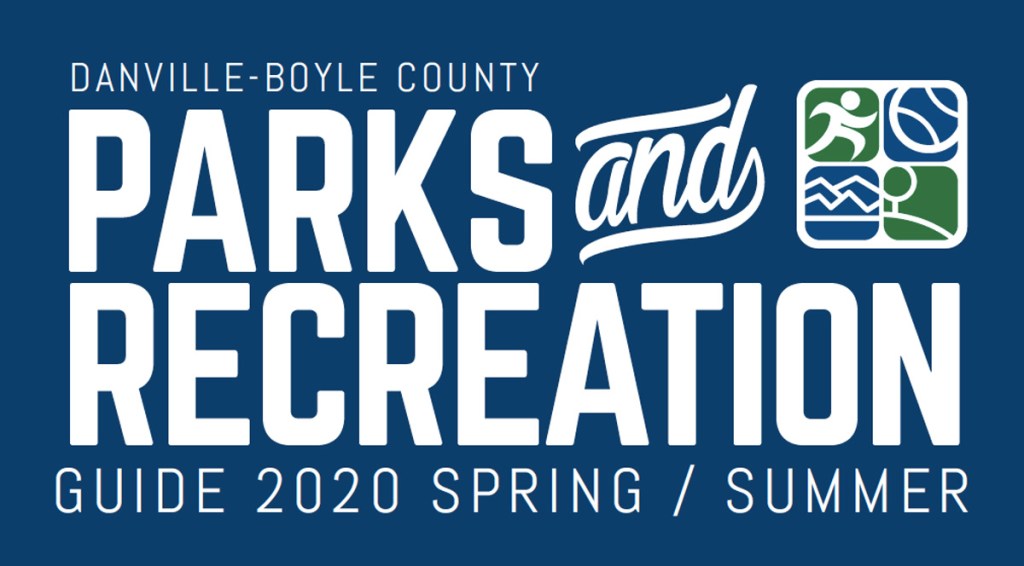 Although most things are on hold at the present due to the coronavirus pandemic, Danville-Boyle County Parks and Recreation still surged on with releasing its new digital parks guide recently.

The guide fills a two-fold purpose — not only to explain what parks and rec does, showing exactly how the public can take advantage of classes, join teams, rent rooms and various other offerings, but also a look into the local trails that have been developing over the years through the Boyle County Trails Alliance. 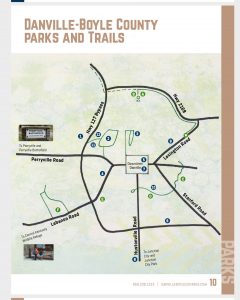 “In January, John Bell and I met; literally the first thing we did after the holidays,” says Jennifer Kirchner. She’s the director of the Convention and Visitors Bureau, and said working on the guide with Bell — who had just come on as parks director — was a top goal. The city and county had finally come to an agreement after a lengthy and sometimes controversial process of joint meetings about the city taking over the parks agency.

But, eventually, the two entities enacted new ordinances creating a new city-run Danville-Boyle County Parks and Recreation agency, which Bell is happy now encompasses all parks throughout the city and county, instead of only programming at Millennium Park.

“Once that was finalized, it became clear on how we would proceed. The first thing we did is figure out the biggest missing piece — information,” Kirchner said.

She said Bell has done a great job getting the website up to speed; he’s also added a class-registration component to it, making that process more efficient. “But we’ve never had a program guide. Now, it’s more important than ever to explain what was part of the parks system,” Kirchner said, since the newly city-run department was now created. 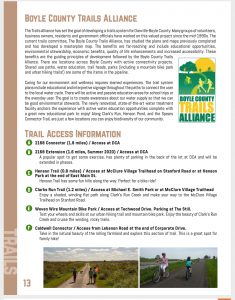 “I’m happy with how it turned out, with the first run,” Bell said. He said it’s something parks plans to put out twice a year, with a spring/summer and a fall/winter edition. Spring/summer will always be the more extensive version, of course, but fall/winter will be more of an activities guide.

He said even though most parks departments have gone in the opposite direction — getting away from guides and going straight to websites and social media — “it’s a necessary piece because we’ve never had anything like that before.”

Kirchner said her biggest angle beyond making sure the community knows what parks does for it was having a map included for the new trails. “As of last fall, we’ve had a couple of places come on line that are more accessible,” she said about certain trails. There are still some needed aspects, like signage and parking, “but we wanted to get a good map in with the guide.”

The middle four pages of the 18-page guide are a tear-out map of the trails, so anyone can take the maps with them as they venture out.

“The trails’ goal has always been to connect with the parks system. It’s quite serendipitous the way this is all coming together,” Kirchner said.

Bell said the pull-out piece for the trails was done to be more versatile, so it can be provided to merchants like hotels, the local bike shop and other “travel places” as visitors come into the community and want to go work out, ride their bikes or take a run.

“Hotels can have that piece in their lobbies to direct them to the facilities and entities we have,” Bell said. “Basically, it’s a one-stop-shop for everything we have to offer.”

The guide also lines out eight new programs Bell said parks and rec hopes to offer this spring and summer, depending on what the virus situation pans out to be.

But some of those programs, he said, like the Easter egg hunt, as well as the “Beg Hunt,” created for dogs, where dog treats in eggs are hidden, have been canceled. “Or postponed — programs we hope to do later in the summer we canceled due to corona, we already have the supplies, so hopefully we can do an August Easter egg hunt …”

Kirchner said with the trails component, they provided further descriptions and locations since not all have Google addresses. “That was one of the coolest parts. We hope people take it with them and see all the different sites they haven’t been to.”

They wanted this to be an all-local project, so Kirchner said they reached out to The Idea Farm, a local marketing firm, which she described as a “great relationship” and collaboration. “They’re excited to have a project that’s so community-based.”

On the topic of collaboration, Bell said he loved that the guide was exactly that — “A couple different entities saw a need. I want it to show that parks and rec can cross multiple entities in the community, working together to get it done. And expanding beyond Millennium Park, showing how parks is vital for the community.”

Bell said an important message to get out to the community is that, “we have not canceled baseball, softball or T-ball. We are taking registrations online or by calling in and paying over the phone,” and said he just received 10 program registrations Tuesday night, and four more Wednesday.

“We have extended the period through the end of April, but once we get the all-clear, we plan to start those programs within the month,” Bell said, so having everyone pre-registered who plans to participate is very important.

“We need everyone to continue to register so we can continue to expedite the program and get it started as soon as we’re in the clear,” he said.

If the current COVID-19 pandemic causes cancellations of the programs, he said those who have paid will get refunds.

“They’ll get a full refund, if we have to cancel it based on recommendations from the CDC.”

So far, things have gone pretty smoothly with the parks being closed down to activities, but remaining open for those who are practicing social-distancing while walking or running.

But Bell had a stern reminder to everyone, since there have been some situations of the public taking down barricade tape in some areas to use courts or playgrounds.

“Our goal is to keep walking and bike trails open, but we can only do that with community support of recognizing and adhering to closures in other places. The next step will be to have to close everything if people don’t respect the closures we have in place. I don’t want to have to close the park entirely.”

Bell said they are seeing more growth and activity during the virus time frame. “Well, it’s the only thing that’s open. People appreciate the fact we still have the trails open, allowing people to walk.”

Aside from practicing social-distancing, Bell said to keep in mind if anyone uses the park benches in place, they cannot be sanitized. “Just be aware of your surroundings, someone else could’ve been sitting there … Just be smart.”