Volunteer group steps up patrol to help officers during pandemic 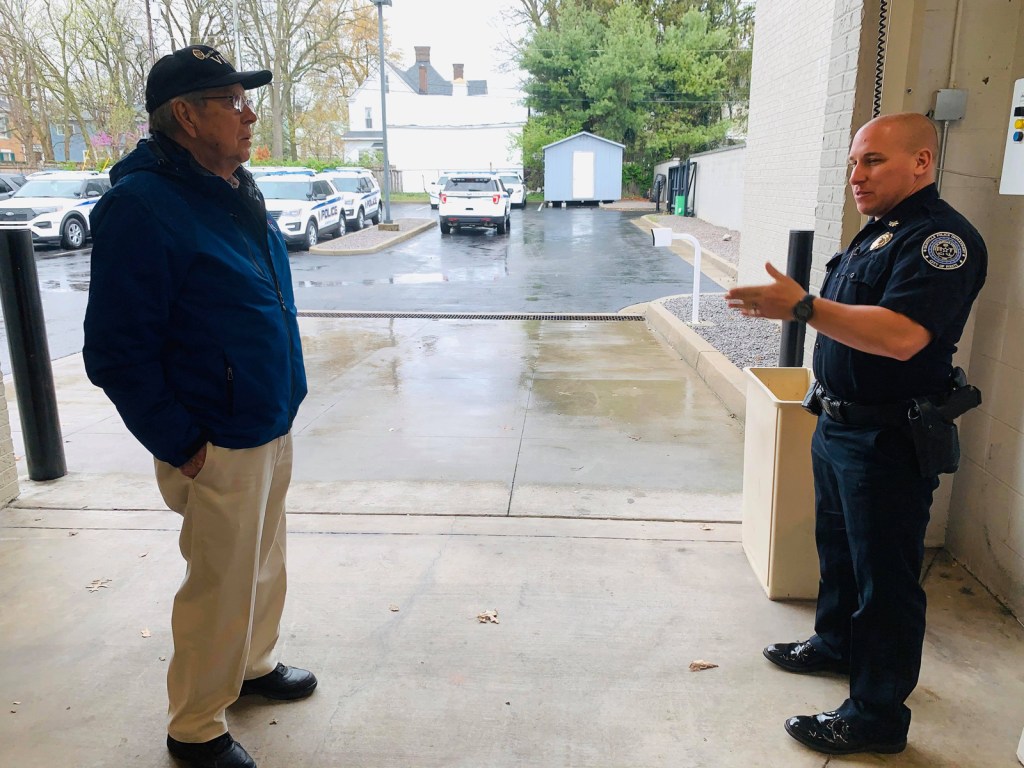 Jack Hendricks reports for duty Monday as a member of Volunteers in Police Service, or VIPS. The group will now work more set shifts in order to assist Danville Police officers out in the field on patrolling. (Photos by Bobbie Curd)

VIPS on the streets

A group of VIPS will be hitting the streets more during the pandemic to help the Danville Police Department with patrolling needs.The group — Volunteers in Police Service — has been in action for the last 14 years and consists of four volunteers, but Asst. Chief Glenn Doan says there’s always room for more.

On a rainy Tuesday, volunteer Jack Hendricks shows up to the police garage, around the side and out back of city hall. He’s signing out a vehicle to use for his 1-6 p.m. shift, where he will patrol local neighborhoods and shopping centers.

Hendricks — who serves as the liaison for the department with the group — began when the program first started here in 2006, after he and others took a trip to northern Kentucky to check out other agencies using VIPS. Hendricks, along with Jeff Peek and Tom Bustle, who were chief and assistant chief, respectively, researched how that national program worked, deciding it was a good one to start locally.

After that, “We went through the people who were interested in coming on with it, picked out four different ones who would work best because of their background and experience,” Hendricks says. Peek is now a member of the group, along with Brad Logan, Tim Dexter and Charlie Parks.

Most who step up to help are former law enforcement or have had some type of involvement in that line of work, whether military or otherwise. Hendricks says he’s volunteered for various agencies in the past, from Jefferson to Fayette and Boyle counties.

“The reason it was started in ‘06, we were down really low on officers, and we used to do these patrols a lot, when we were having difficulties out in Bluegrass Estates, for example, with thefts from cars and garages,” Hendricks says. “That was one of the early places we did quite a bit of patrolling, just to be seen.”

The department usually requires anyone who wants to volunteer with the group to have completed its Citizen’s Academy, but due to the pandemic, the next academy planned for May is up in the air. The academy works to introduce people to the department’s work and officers, how they do it and even giving citizens chances to participate in different exercises, like a traffic stop or use of deadly force scenarios, for example.

“We do like for them to complete the Citizen’s Academy and have prior experience in law enforcement. But since we don’t know what will happen with the academy in May, if someone is interested and has experience, we can look at training them on what we would expect from them to be a part of the program,” Doan says.

Hendricks says although the next academy is likely on hold for now, he strongly recommends anyone interested in the VIPS look into joining it.

“Reason for that, (the Citizen’s Academy) gives you a real look at what these guys go through every day. When you see that, go out and get involved …” some people go through the academy and decide they don’t have what it takes to be a volunteer, Hendricks says. So it’s a good first step.

There is also a thorough background check involved for anyone who wants to volunteer.

The group has been imperative to the department during special events, like downtown festivals or races that require roads blocked off, Doan says.

But visibility of some type of patrol means a lot to the public, Hendricks says. Doan agrees.

And especially, right now, where social-distancing has become a way of life during the pandemic, it’s great to have an extra set of eyes out on the streets and in neighborhoods, they say.

“If they saw something, a large group of people gathering together, they would report back to dispatch center or the on-duty supervisor. A determination would be made on how to respond,” he says. “They observe and report, and they’re good witnesses. A first line of defense out there, they see something and report it.”

VIPS all have radios in the vehicles they drive. Now, they’re also equipped with sanitary wipes, gloves and masks.

“They can be in the neighborhoods that we can’t get to as often. And they’re a presence at shopping centers,” Doan says.

Due to the pandemic, the newest hires of the department are in limbo, since the police academy has shut down classes. “We’re not at a critical level, where staffing is concerned, but we’re not at capacity,” Doan says.

“We’re just eyes and ears,” Hendricks says, although it requires many hours of training to be a part of the group. He says they’re not interested in those who want to “play police officer,” or may be prone to taking matters in their own hands, thinking they have “unleashed authority;” that’s not what they’re intended to do.

“Even though most of us have experience and some kind of background (relating to law enforcement), there’s a manual that says what we can and can’t do. But we’re experienced enough to know what we should and shouldn’t get involved in. The first alternative is always to call a regular officer when needed.”

Hendricks says he volunteers simply because, “it’s a good community service, and I’ve always loved law enforcement. I admire them for what they do, and just like to help them. It’s a responsibility I take as serious, and I like doing it. It helps the community, and the PD.”