(Editor’s note: Information for this article was gathered from the Advocate-Messenger archives. Her granddaughter Sharon Stratton furnished the photograph.) 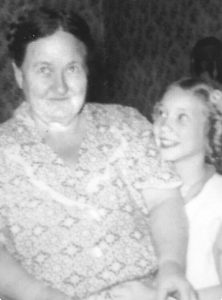 Minnie Lee Stratton is shown with her granddaughter Carolyn Davis.

A Boyle County woman was winner in several championship rounds during competitions for crappie fishing at Gwinn island Fishing Contest on Herrington Lake in the mid-1900s.

The contests were for men and women and were hosted by Wellington Cooper, owner of the fishing camp.

Mrs. Stratton apparently went fishing regardless of the weather. She was at the boat dock ready for the crappie along with her friends.

Cooper reported the weather was windy and chilly on the lake for the spring event but went on with the contest.

Mrs. Stratton caught 24 nice crappie, including one that weighed 16 ounces in the March 1953 event. She led the women’s division of the contest for crappie.

Mrs. Stratton was in the lead in the spring April 1953 competition with a 24-ounce crappie included in her catch of 30 over a weekend. She held the top spot in the Crappie Division for Women with a 19-ounce fish she caught the week before.

She won free boat rentals for a year or $25 in merchandise for catching the 19-ounce crappie in the event.

Cooper said the fishing was the best that year than in the past seven years since he had run the camp.

Mrs. Stratton came out as winner among five other women in the August 1953 crappie competition. They used small minnows and light lines to catch the 30-fish limit during the contest. Mrs. Will Selby was first with black bass, and Mrs. C.B. Hocker placed first with a string of white bass.

All the fish caught during the contest were weighed and measured by an official at the boat dock.

Record numbers of crappie brought out large crowds of men and women who registered at the October 1953 fall event.

During the five weeks, white bass and white perch also were caught in large numbers.

Cooper said interest in the contest was high and especially in the women’s division where competition continued keen throughout the afternoon of September 30.

Mrs. Selby won the black bass contest and got a Summit reel and free boat rental for a year in the crappie division.

The fish were also eligible for the Chimney Rock Fall Fishing Derby at Herrington Lake and the Courier-Journal contest.

Mrs. Stratton brought in a good string of crappie in the September 1954 contest.

However, organizers were puzzled as to why more fishermen were not trying for crappie which can usually be caught in limit numbers with little effort. The fish were shallow from 12 to 14-feet and ready for the small minnows. The water level was falling slowly and surface temperature at the lake was in the 70s.

Coffee with Mimi: Laugh at awkward occurrences resulting from…