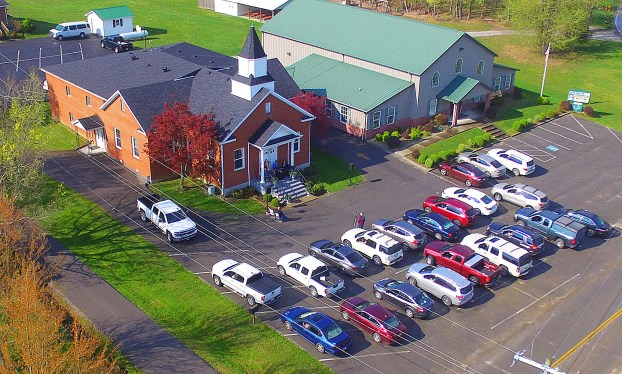 Parksville Baptist Church in rural Boyle County celebrated Palm Sunday with a drive-in service, which was attended by about 70 people in 22 vehicles. This was the second such service hosted by the church, and another is planned for Easter this weekend. (Photo by Jeff Moreland)

The church normally has around 60 people in attendance, and that first Sunday’s drive-in service brought 15 to 20 cars according to Hoffman. He said there were 62 people present. But rather than pack into the church and sit in pews, those attending the service stayed in their vehicles.

In addition to the drive-in traffic, he said the service was also viewed on Facebook.

“We had over 300 people view our service on Sunday morning, looking to see exactly how it went. If it went over well, they may give us a chance and come out and visit us,” Hoffman said. 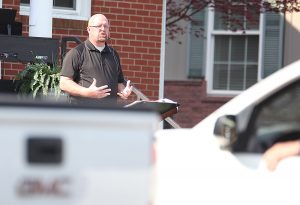 Parksville Baptist Church pastor Phillip Coffman delivers the message to a about 70 people gathered in their vehicles for a drive-in service in the church’s parking lot Sunday morning. (Photo by Jeff Moreland)

And visit they did. This past Sunday, which was Palm Sunday, the second such service at the church drew a crowd of 22 cars and about 70 people to worship. Visitors came from as far away as Lawrenceburg and Waynesburg.

Coffman said the idea for the service came from an Alabama church he saw do a similar service on Facebook.

“I had seen it, and then John Ducker and I put our heads together and got everything together and did it,” Coffman said. Ducker is Parksville Baptist Church’s music leader.

The service consisted of Coffman and Ducker on the church porch with a piano, along with speakers to make sure everyone sitting in their vehicles can hear. 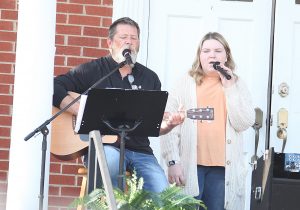 Music leader John Ducker and his daughter Jenna Ducker sing a hymn from the front porch of Parksville Baptist Church during the Sunday morning drive-in service. (Photo by Jeff Moreland)

Parksville Baptist had not held in-person services since last month when Gov. Andy Beshear instructed churches to cease the practice temporarily. He said services were livestreamed, and added they had been doing that for some time before the pandemic.

“We figured that would give an opportunity for our shut-ins to see a live service,” Coffman said.

In-person services are not the only thing altered by the virus. Coffman said he has been using the telephone for visitation and even Bible study.

“I like doing weekly visitation, and of course I have not been able to go knock on doors, but I’ve called people to check on them,” he said. “We’ve also been doing Bible study by phone, and we’ve had seven or eight people in that.” 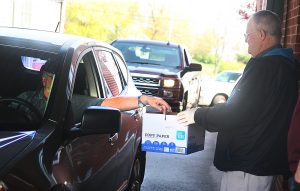 Coffman said other aspects of a traditional service, such as collection of offering, are continuing. Rather than passing a plate between those attending, the church has ushers going from car to car to collect the offering. He said if someone wants to be baptized, they will have a couple of options, but safety measures will continue to be observed.

“If we have anyone who wants to be baptized, we will play it by ear when the time comes. It would be up to the individual if they just want family there. If they want to be baptized with the church family, we will postpone it until we can get back in the building.”

When the pandemic ends, the drive-in services may not necessarily be a thing of the past. Coffman said he and Ducker have talked about doing the services again on special occasions. Either way, being able to continue to have services of any kind is important to Coffman and the church.

“To me, that’s a high priority. Our church is a close-knit group,” he said.

This weekend is Easter Sunday, and Coffman said there will be no egg hunt for children, but the church does plan to provide goodie bags with a sandwich, chips and a drink for children who attend the service.