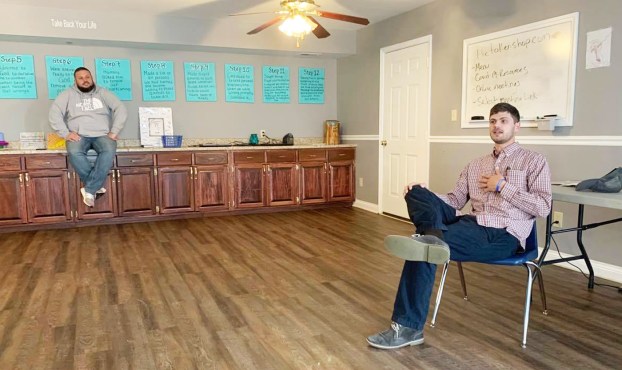 Director of Outreach Roger Fox, left, and office manager Blake Hobson discuss the logistical work that went into making sure all Shepherd’s House clients are able to have face-to-face interaction with peer support specialists during the health crisis. (Photo by Bobbie Curd)

During this unprecedented massive shut-down due the COVID-19 virus pandemic, some are able to “take it easy,” staying home and spending time with family while keeping up with work requirements online. Those who can are staying put to avoid in-person, human contact in order to prevent the spread of the coronavirus, which can be deadly to some of the population, including the elderly or those who are otherwise compromised.

But there’s a big part of the population, Roger Fox says, who rely on that very human interaction for their own life-or-death purposes — those who are struggling to stay clean and sober.

Last Wednesday, Fox and other staff members of Shepherd’s House — an outpatient treatment program — held a 15-member-strong peer group meeting, all done using the Zoom online meeting platform. Fox, who is director of outreach, says sure, it’s not ideal — but it’s what they have to work with during these uncharted times.

“Initially, we reduced the amount of people we had in groups, when it all first happened,” Fox says. But when the community began taking further steps, like closing all nonessential organizations, they began cutting down the hours clients were inhouse, conducting check-ins via phone.

But not being able to see their clients can be quite the barrier in this line of business, Fox says. “They’re not only doing group here, they meet with others doing employment programming, meeting here with their therapists through New Vista …”

For a while, they were able to seclude those who needed to meet with their specialists by organizing them two-by-two in different rooms in the treatment center’s South Third Street location. But now, New Vista is doing all their meetings online. 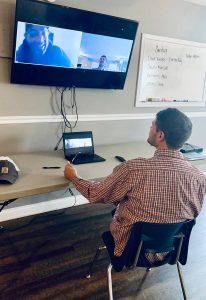 And when people need to come in for a drug screen, they do so one at a time during a designated time slot, calling the staff from the parking lot to tell them when they’re ready. “We bring them in, screen them then get them out …” while disinfecting every surface after the procedure, Fox says.

After Wednesday’s group meeting, office manager and peer support specialist Blake Hobson holds a final check-in with Charles Young, who is actually using a computer on the top floor of the center. Fox says many don’t have digital capabilities from home or cell phones.

“That way, they can still come in and be separated in a safe distance,” he says. “We’re trying to do what’s best for everybody, keep our commitment to the clients and to the courts.”

The group setting is one of the most imperative parts of the program, Hobson and Fox both say; it’s a major part of why they both got clean. Shepherd’s House is known for employing its clients with a proven track record of rehabilitation and leadership qualities, an initiative that has proven successful with the intensive outpatient program.

“For us — for Blake, myself, Stephanie (Haydon) and Ashley (Dowell) — we got sober through that connection. The socialization is what keeps us sober,” Fox says. “We’re OK, but there are tons of alcoholics and drug addicts that are probably suffering, staying in the house, especially in early sobriety.”

Not to mention the extra temptation that’s looming over them, he says. “Even if you weren’t (an addict) before, even if you were just a social drinker, now you’re isolated in your house, don’t have anything else to do. Why not drink every day? … That’s how it all kind of starts, the isolation. Life is stressful, I’m out of work, I don’t even know how I’m going to pay the bills this month, so I’m going to drink because it helps me deal with stress issues.”
Hobson says the instinctual need for that human connection when trying to get clean is a strong one. “I think that’s been the biggest struggle in general, not having that face-to-face connection. I went through that myself, just being in a 12-step recovery program.”

The meetings are more than just about checking in. “Normally you go to meetings and get that contact with people, who care about how you’re doing. We’ve also had clients tell us it’s hard to get a sponsor right now …” Hobson says.

And it’s different to connect via the internet. “It’s a different kind of connection,” Hobson adds, with not being able to automatically pick up on body language. “Sometimes the virtual aspect of it, you’re not seeing that head nod right away due to the delay, so it’s just not the same.”

But Fox says he will say this: “There is a good side to it.” He said he and Hobson, who both still attend meetings themselves, logged in to a national 12-step meeting a while back. They found it comforting that there were people present from different regions of the country.

“There were people in it from New York, from California, in the same meeting with us who’d had years of sobriety, so that was good,” he says.

All the in-person Alcoholics Anonymous meetings are also closed, aside from virtual ones, which they estimate there are something like 125 different ones per week in Lexington.

“It’s a good thing to meet people from all different regions and we’re all going through the same thing,” Fox says.

It’s been a learning experience, they say, and Hobson says hopefully, when the virus pandemic is all over, “a lot of the things we’ve learned, we can integrate into our treatment.”

They say there were already clients who have a hard time making it to the center, so mastering the online platform will be useful to them.

But, Hobson says there’s something about the video connection that “makes it a little weirder” to be vulnerable with someone you’ve never met, when you’re doing it through a screen.

“That was the conversation we had two weeks ago, when this all started. It was fresh, it was new, and at the end of the day, it is life or death for people who need to get online and get that — some kind of connection is better than nothing,” Fox says.

There were some logistics to work through having larger groups online, like making sure not everyone’s mic is on at the same time, and it’s a bit more prompted and organized rather than conversational.

Because many drug-related, non-violent offenders were released out of the Boyle County

Detention Center in order to lessen the population and cut down on any virus threats, Fox and his coworkers have found themselves with even more clients to assist due to court orders, which they are happy about. Shepherd’s House recently received more than 20 new clients from Circuit Court Judge Darren Peckler’s court alone — which was a first — so they had to tighten up even more on their procedures.

“They’re out on bond, going to pretrial … most of the time coming here was ‘recommended,’ but it wasn’t within the order,” Fox says, but due to the crisis, it is now.

“If you can stay sober during this — look, I’m getting out of jail, I don’t have anything, the world is crazy right now, right? But I stay sober through it all, that proves something. That’s huge.”

It’s a whole new world for them, they say, and the center is trying to navigate it the best way they can. “And keep our clients No. 1, so they can continue to rely on us,” Fox says. They will start moving to a lot of one-on-one check-ins with the four staff members, breaking the clients up so they can get that personal connection.

Shepherd’s House will still take new clients outside of court orders who come to them on their own. “Last week, I think we probably put four or five people who called and initiated it on their own. They said ‘hey, I need to go to treatment,’ so we called some of our treatment providers to get them in. So we’ll still be able to help,” Fox says.

There’s a phone line which transfers over to Fox or Hobson after hours, too, so they can be accessible to those who need it 24/7.

“We know it’s a tough time. We know people are shut in. Whether you have a substance abuse issue or mental health issue, or if you’re just lonely and need someone to talk to, we have people on staff who can just spend some time with you on the phone. And that goes for everybody.”

The most important signal Fox and Hobson say they can put out to the community is that “we’re here to talk to you and will try to help you.” If they can’t, Fox says, “We need to plug you in to one of our partners.”

With 10 people having confirmed cases of COVID-19 in Boyle County, several symptoms are being reported. According to Boyle... read more