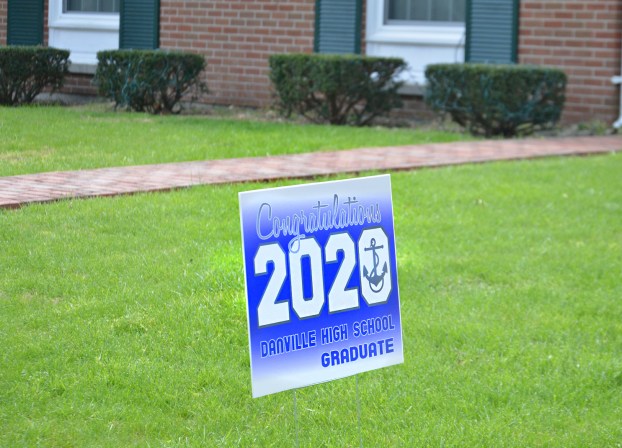 A sign in the front yard of a home in Green Acres subdivision congratulates the Danville High School senior who lives there. (Photo by Robin Hart)

Spring is here, and it’s the time when student-athletes should be on the fields playing baseball or softball, competing in track and field meets and tennis matches. Proms, graduations and other special events are also on the horizon, but many of these have already been postponed or cancelled due to the COVID-19 pandemic.

Most Kentucky schools are closed until at least May 1, and sports seasons are on hold for now, with the outlook for getting back on the fields in doubt.

Blake Samons is a senior on the Boyle County High School baseball team. He and his teammates have been playing together since they were small children, and he said this season was one they were all looking forward to for a long time.

“This group of seniors, we’ve been talking about this year since we were 9 or 10 years old, and it’s tough not getting to see it through,” he said. “We had high expectations. It was a dream of ours to make it to state and compete for a state title. We had no doubts in our minds we could do that, so it’s tough not getting that chance.”

Samons said he and his teammates are holding out hope and staying prepared in case there is a chance to play at least a portion of their senior season. Samons pitches for the Rebels, and he said he and his brother, Connor, a junior on the BCHS team, have been throwing together and staying ready. 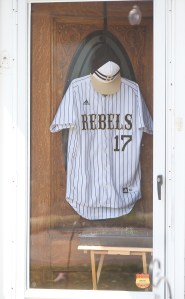 Blake Salmons’ Boyle County High School baseball jersey and cap hang on the door of his family’s Perryville home. His mother, Beth, is one of several parents doing this to honor the lost senior seasons of their student-athletes. (Photo by Jeff Moreland)

Beth Samons is the boys’ mother, and she said it has been difficult for her and her husband, as well as their friends who have kids on the team. In a show of support for the players, she and other players’ families have hung their sons’ jerseys and hats on the front doors of their homes after seeing a similar display online to honor seniors who have lost their final season of high school sports.

“At first, with everybody stuck at home, we were thinking we’ve got a few weeks out, but we’ll get a good amount of our season back. Then we realized we weren’t going back, for a while anyway.

So for that senior group, we just started trying to look at ways to celebrate them and help out with that whole, I guess the depression of missing their senior season. It’s our way of saying, ‘Hey, we’re missing our senior season, but we’re trying to celebrate in some way,'” Beth Samons said. “On the other hand, I believe God has a master plan, and whatever happens, he’s got the best interest of these boys at heart. So we can’t just crawl down in a hole and stay there. There’s worse things that could happen to people. You’ve got to take what you’re dealt, deal with it and move on. I guess that shirt and hat on the door embodies a whole lot for us.”

Danville High School softball coach Tim Breitenbach described the impact of COVID-19 on spring sports, and especially his team, as “a disaster.”

“When you are trying to rebuild a program and open your new softball field, losing a complete season is horrible,” he said. “Expectations for us were high this season as we had most of our top players back and a few new additions. I have always said since I took the head coaching job last year that it was very important for us to get plenty of reps and play better competition,” he said.

Any momentum the team had built is now gone, Breitenbach said, and he expressed sorrow for his seniors.

“I can’t imagine how our seniors who will miss playing on their new field must feel, and especially those who are not playing college ball. But due to a health crisis, we press on,” he said.

Danville High School senior Ella McKinney plays on the tennis team and had been looking forward to her senior season. The loss of this season is additionally devastating because she was not able to play her junior season due to an anterior cruciate ligament injury.

It’s not just sports, but other special times for seniors that make McKinney sad. She had already purchased a dress for her senior prom and had made appointments to have her hair and nails done for the special night.

“Everything from our senior trip, our senior field day, and walking through elementary schools with our caps and gowns is something all of us have been looking forward to since our freshman year,” she said. “Obviously all seniors across the world are going through the same thing, but it’s hard for everybody, even the administration and everybody. It kind of puts things in perspective because something can be taken away so fast and nobody can control it. Nobody can do anything about it.”

She added that school administration is doing its best to help the seniors through this difficult time, and following some online meetings, it is working.

“They’ve pretty much just said they only thing right now that is guaranteed for us is a cap and gown ceremony. They’ve mentioned that they are trying really hard to make everything else happen, but obviously there’s only so much they can do to get everything in for us,” McKinney said. “I’m just really happy with how Danville (High School) is handling everything. Mr. (principal Thad) Elmore, coach (assistant principal Ernest) Dunn, Mrs. (guidance counselor Beth) Gooch, they’re really making sure that the seniors are a little less stressed and helping us get through everything and staying in contact with us. They’re being a big help to us.”

Elmore said in an emailed statement that the Danville Board of Education and Danville High School are committed to providing their seniors with a cap and gown ceremony and a prom at some point. He added that the prom had been set for April 25, but that is postponed and a date prior to June 1 is being sought if possible. He said that if at some point a directive or recommendation is given from the state, adjustments will be made as needed. Graduation is scheduled for May 22, and that date has not been changed, according to Elmore.

He added that Danville High School has been looking for ways to recognize seniors, and last Friday staff members volunteered by placing yard signs in each senior’s yard. The district’s website and social media will also recognize seniors for their accomplishments, and Elmore encouraged students and parents to check all social media outlets and the Google Classroom Class of 2020 sites on a daily basis.

Boyle County High School Principal Mark Wade also sent an emailed statement about how his school is handling those issues. He wrote that BCHS had its prom scheduled for May 2, but said that has been postponed indefinitely. Options are still being considered for graduation.

“There is a fear of being unable to host a traditional graduation, so we have created a graduation committee that is currently exploring options in order to create an appropriate celebration for this phenomenal group of seniors. We are making the best out of an extremely tough situation and will continue to work hard to celebrate the milestones that students typically encounter along the way,” Wade wrote.

Wade added that he knows many spring sports would be extremely competitive for his school, and he hopes for the potential for a very late season for those teams and student athletes.

“Many of our students continue to work out on their own hoping for the opportunity to play just one more game,” he wrote.

In conclusion, Wade wrote that Boyle County High School is trying to make the best out of an extremely tough situation, and “will continue to work hard to celebrate the milestones that students typically encounter along the way.”

Danville High School is also focusing on every option, according to Elmore.

“These are trying times for everyone, especially seniors and their families. Numerous staff members have reached out to individual seniors offering support as we navigate this together.  Even though all levels of school, PreK to college, have had effects, each school is unique and different,” Elmore wrote. “Not only classes and sports teams but prom, graduation, baccalaureate, senior field day, the spring musical, intersession week, and forensics to name a few. All of these events have had an effect on the seniors who have worked diligently for 12 years to finish and move to the next phase in their life. We are going to make the most of the last five weeks for the seniors of DHS.”

Cracking under pressure  Editor’s note: This is the fourth part in a series on a case overview of the ABC... read more