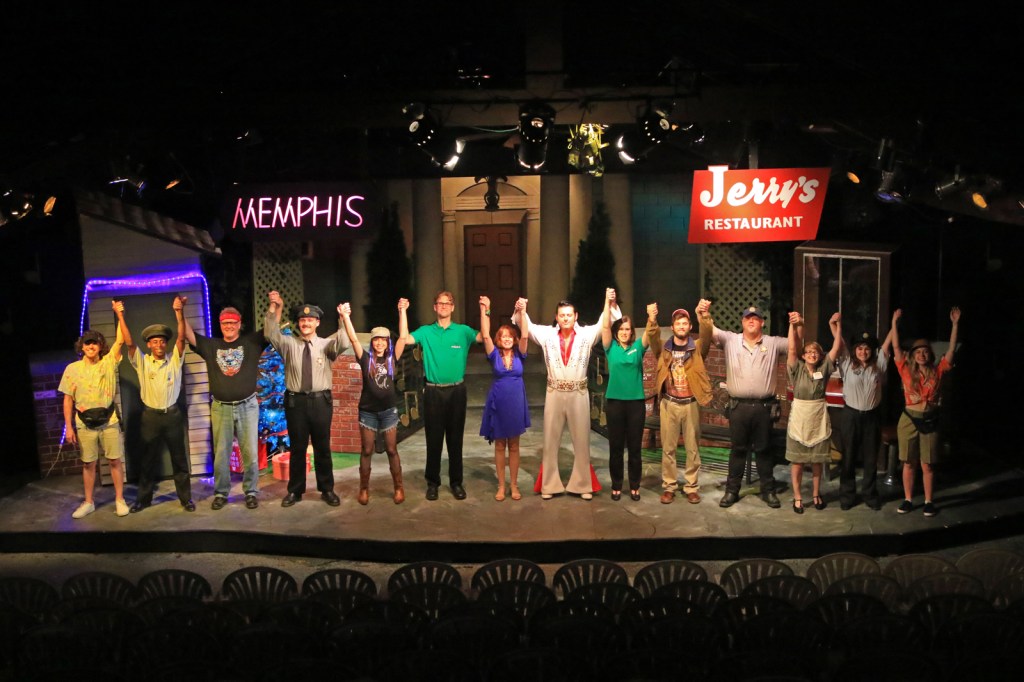 From Pioneer Playhouse’s 2019 season, the curtain call is seen for the production of “Breaking Up With Elvis.” (Photo by Kirk Schlea)

Henson Family says although disappointed, it prefers its patrons stay home and be safe, resulting in a later start date to the 71st season

For seven decades, Pioneer Playhouse’s mantra has been “the show must go on,” something they’ve held firm on, rolling with the punches and providing solid seasonal offerings at the state’s oldest outdoor theater, no matter what.

But with the COVID-19 virus pandemic, the playhouse has found itself forced to delay its season.

“Probably the main thing was the Brass Band rescheduling, or postponing,” said Heather Henson, managing director. Recently, the Great American Brass Band Festival’s committee announced that it would be trimmed down from its normal weekend-long, June event to a single day in July.

The playhouse had been working with GABBF for about a year now on its season opener, “All That Brass!” which will now be shelved. It was the yearly Kentucky Voices play, and this will be the first time in 12 years they haven’t been able to present an original piece celebrating Kentucky, said Robby Henson, artistic director.

Heather Henson said the playhouse was excited to work with the festival’s director, Bill Bandy, along with incoming director Missy Angolia to “combine forces and make Danville a special place to be on that June 5 weekend.” But once they knew the festival postponed its event, she said it was clear that they must follow suit.

Pioneer Playhouse was a packed, full house during the past “Guarded” production, and hopes to be back at full capacity soon. (Photo by Kirk Schlea)

“Now we’ll just make sure it’s an even bigger, better event next year,” she said. They had seen the writing on the wall, since all theaters are closing, or going to streaming performances live, like the Actors Theatre of Louisville.

“Robby and I got back from New York, doing auditions there, and having a reading of our prison show,” she said, referring to her brother’s Voices Inside initiative he heads, a collaboration with Northpoint Training Facility.

“We’ve had actors from New York say they didn’t know if they could come during the summer,” she said, with many of them losing their jobs. “A lot of actors are servers, and the restaurants are all closed, Broadway is closed. Others sublet their city apartments in order to afford being away for the summer, and know they won’t get any takers now that the city has been so greatly affected by the virus.

“We can’t imagine a summer without the playhouse, so we’ll do everything we can to postpone. The next couple of weeks will really determine” what will happen with the rest of the season, she said.

Actors normally come in Memorial Day weekend to set up their temporary homes on the playground’s compound in dorms. “Which is not that far away, and we knew — or doubted — that we could do that,” she said.

But, other actors still plan to come in for the delayed season from other areas, Heather Henson said. She said she never would’ve thought that the playhouse would ever have to postpone a season, so it’s been an adjustment.

As of now, the delayed arrival of actors is set for June 7.

“Around now is when we start cleaning up the compound, after winter. “ Heather Henson said since it’s an outdoor theater, there is much maintenance to be completed. “All the stuff that’s happened over the cold months. Raccoons take over, they’re everywhere — in the rooms, backstage …” so they are currently working on setting humane traps to move them. Squirrel nests must be removed, outdoor furniture must be taken care of …

“There’s lots to do. We start a huge spring clean. So, in a way, that keeps us, the Henson Family, busy.”

Heather Henson, her husband and children are now living on the compound after losing their home last year to a fire, which destroyed everything they owned. “We’re all together, so we can still do what we do” to prepare, she said. Her kids have joined in, helping to paint and taking on other tasks.

The playhouse normally brings on volunteers by mid-April, which is now unknown. “We don’t know, will we be doing all this ourselves? Will Robby and I, and our kids, be cleaning all the rooms ourselves? We just don’t know. But it does keep us busy and focused, during these uncertain times, so we’re thankful for that.”

And, she said, the one silver lining is that they are all there, on the grounds, together. Heather Henson said if they had not been living with her mom, Charlotte Henson, producer of the playhouse, “then I wouldn’t have been able to come in and do all the grocery shopping and take care of her. Although I had to almost tie her down, she’s still so active, even at 89 …”

She said it’s nothing to see her mom, “Miss Charlotte” as the community calls her, taking care of some weeding and cleaning out some of the buildings.

“She’s an Energizer bunny, let me tell you …”
She said in the grand scheme of things, two weeks later isn’t that much longer. “Once the playhouse starts, it’s just so fast. We just hope we’re going to be able to still do it — in our heart of hearts, hope of hopes. And people love it. Our patrons are so important to us,” Heather Henson said. With many of them being older patrons, they especially didn’t want to risk anyone’s health and start the season on time.

Anyone who has season tickets just need to keep them as of now, and the playhouse will continue updating the public when they know of any changes. Those who have reservations for the first show can simply call or go online and make those for the second show, which is now the first.

“If they are patron ticket-holders, hopefully they’ll use that second ticket (for the canceled first show) to bring a friend to any other show.” Those tickets will be honored for any other offering throughout the season, she said, even the live comedy show which caps it off as the last offering.

The playhouse is a nonprofit, so it will definitely be a loss of income for them, she said. “We’re hoping there will be some state help. We’ve applied for a small business, nonprofit loan, in order to be able to pay our people, like the office manager.”

The virus pandemic has affected the playhouse “in every way,” she said, just like most area organizations. Normally this time of year, they would be selling ad spots for the playbills, for example, and that’s been pushed back, too, so it will create even more of a cashflow problem than they usually deal with.

“We’ve seen other comparable theaters say they are not sure they’ll be able to continue at all this year due to all this.”

The Hensons hope they won’t be forced to cancel the full season. “We’re going to try. We’ve been through a lot and have always been able to keep going. We will feel like we will, but it’s going to be challenging. We’re used to rolling with the punches, so we will do what we need to do.”

Of course they are disappointed in the changes, but Heather Henson said it’s important to them that their patrons stay home and be safe. “That will make a big difference in all this. We want to see everyone out there, eventually, all their smiling faces. It will be so much fun when we can. So many say they can’t wait to see us again … and we feel the same way.  We can’t wait to see everyone return to the playhouse.”

Heather Henson said she promises, “The curtain will rise again. Our patrons are like family to us, but we want them to stay safe.”

Pioneer Playhouse’s postponed season is planned to begin on Friday, June 19, and run through July 4, with “Clue.” Performances are Tuesday-Saturday, and offer a dinner, with reservations, before each show. The rest of the season includes: “Southern Fried Funeral,” July 7-18; “Jeeves in Bloom,” July 21-Aug. 1; “Maybe Baby, It’s You,” Aug. 4-15; and the special stand-up comedy weekend, starting Lee Cruse, Aug. 21-22.