Dispatcher ‘has a public servant’s heart’ 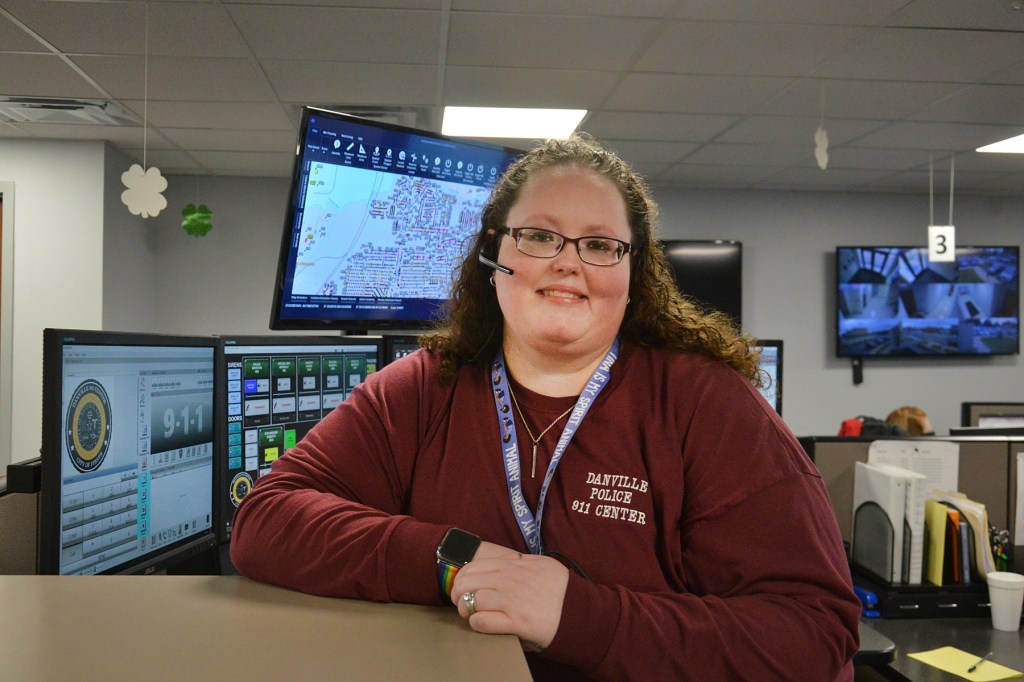 In the basement of Danville City Hall, there’s a large room behind a sturdy, locked door. Inside, the overhead fluorescent lights are dim, which is how the 911 call center dispatchers like it. The atmosphere is serene and quiet — until an alarm sounds and a dispatcher answers an emergency call.

Krystal Francis-Blackburn has worked at Danville’s 911 call center for six years, and is now the second-shift supervisor. She said dispatchers talk with people everyday who need some type of emergency assistance. “To them, calling 911 is a last ditch effort,” Francis-Blackburn said. “We’re talking to people on their worst day.”

Then she added, “Their worst day is our everyday.”

Francis-Blackburn believes that 911 dispatchers are the first, first responders. When a dispatcher answers a medical emergency call, they gather as much information about the medical history and the situation as possible and dispatch emergency responders to the scene. Then they give life saving instructions to the caller when necessary.

“These people (dispatchers) are just as trained to save your life as those who show up at your home,” Francis-Blackburn said.

And they care for and try to protect the first responders by giving them as much information as possible. “I worry about who I’m sending … into that situation. We’re trained to get and give more information, that makes it easier for them to handle.”

If someone on the 911 line is screaming for a police officer, “We want them there as quick as you want them there. But you have to help us help you.” That’s why it’s crucial that callers answer all of the dispatcher’s questions, she said.

One of the hardest aspects of being a dispatcher, Francis-Blackburn said, is not knowing how the situation in “bad calls” comes to an end. “We don’t ever know what happened. When I’m giving life-saving measures over the phone, in my mind, I’m doing it.” But she doesn’t know if the person she’s trying to help is really following her instructions.

Francis-Blackburn recalled a tragic incident when the 911 caller needed help in resuscitating an infant. She said she was calmly giving instructions but she kept hearing the frantic caller running to the door screaming for someone to help the baby instead of focusing on helping the infant themself.

“We try to keep people focused and calm, but sometimes they’re too far out there.”

Once she received a call from a wife whose husband and Francis-Blackburn didn’t have instructions on how to use it. So she googled the device, told the wife how to use it and do CPR.

Francis-Blackburn said EMS arrived on the scene and she assumed the husband had survived. She found out later, however, that the life-saving instructions she had given the wife “got him back enough so she could tell him goodbye.”

Francis-Blackburn said she wants to “shine a light on the mental health aspect” for 911 dispatchers. “PTSD is just as rampant” in dispatchers as it is in other emergency responders.

At the end of the day, because of her extensive training, she said she’s confident, “I’ve done everything I could. No regrets or guilt.”

She originally wanted to become a school teacher, but realized, “I’ve just got a public servant’s heart. I can’t imagine doing anything else. I thoroughly enjoy thinking I’ve made a difference to somebody.”