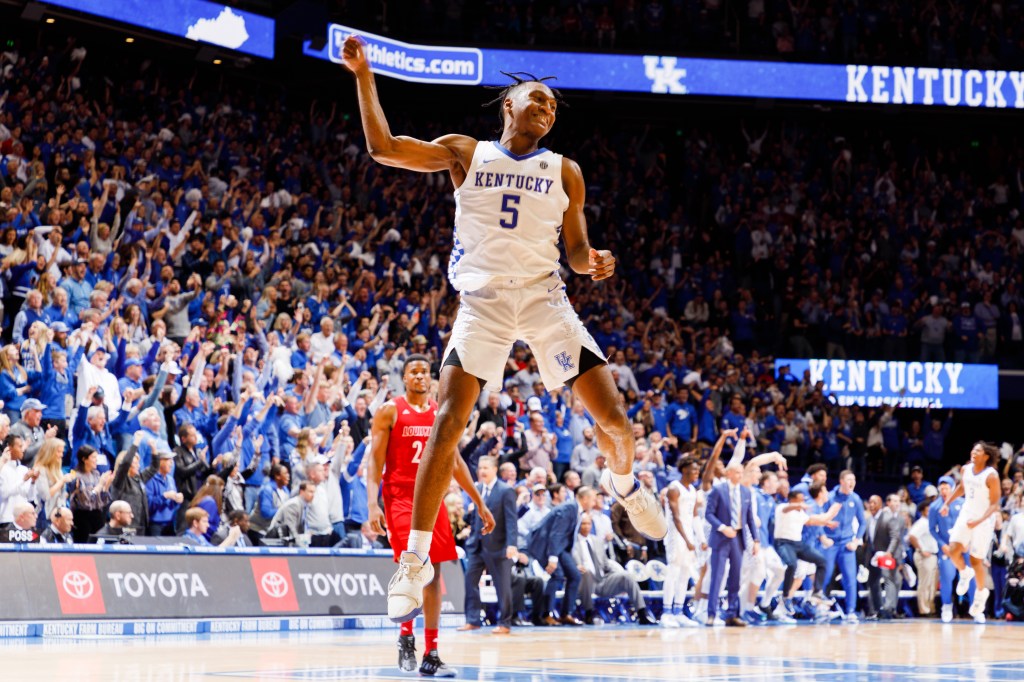 Immanuel Quickley had a lot of happy moments last season at UK but now has a lot of reason to keep his name in the NBA Draft. (Elliott Hess/UK Athletics)

Every day that goes by without having Immanuel Quickley announce he’s keeping his name in the NBA Draft gives Kentucky fans a little bit more hope that he might return to UK for a junior season.

Every time Kentucky fans see mock drafts with Quickley listed among the final players to be picked despite being the Southeastern Conference Player of the Year, it gives UK fans a little bit more hope that he might return.

However, my advice would be to quit hoping.

First, there’s no need for Quickley to rush his decision knowing that the NBA Draft is likely going to be moved to a later date and the NCAA then should adjust the deadline players have to make their decisions about whether to stay in the draft or return to school.

Second, Kentucky coach John Calipari is not going to rush Quickley to make a decision. If he returns, Calipari has readily admitted UK would be a better team during the 2020-21 season. However, if Quickley wants to try playing for pay he has Calipari’s blessings.

“I think there are actually some NBA teams that would happily draft Immanuel Quickley over Tyrese Maxey,” one college basketball/NBA writer told me.

“Maxey on paper is a potential lottery pick and I know some mock drafts have Immanuel going almost last in the second round,” the writer said. “But are those people talking to the same NBA teams I am? I don’t think so.

“Immanuel Quickley will not last that long in the draft. I know some teams are worried about his size but I think Steph Curry (of the Golden State Warriors) is the poster boy of an undersized guard at the next level. Same with Trae Young (of the Atlanta Hawks).

“Quickley was a point guard in high school. He’s a great shooter and more than adequate defender. He was SEC Player of the Year. I just know teams I talk to seem a lot more interested in him than what the mock drafts are projecting.”

One of Quickley’s biggest intangibles is his character. He prides himself on his Christian faith and Calipari talked often last season about the example he set for others to follow.

Maybe that’s not important to NBA teams. Since I didn’t know, I asked Rivals.com and Yahoo.com basketball writer Krysten Peek about the value of a player’s character in draft decisions.

“I think character is big for a lot of teams. They want a guy who is good in the locker room. That’s especially big this year when they are not going to see and talk to players at the (draft) combine. It’s just going to be one on one virtual conferences,” she said. “Someone like Quickley who has high character, that’s going to be noticed by teams because it’s obvious he’s not only a good player but really a high character player.”

Yes he is. Think back to the answer he gave about what was the biggest challenge about showing his faith while being in the spotlight of Kentucky basketball where everything is magnified.

“Well I’m not perfect but I think the challenge is the same for everyone, just being bold in not giving into peer pressure and sharing the good news. Jesus saves and he loves all,” Quickley said.

So add in his character value to his playing value and it just seems unlikely he’ll let those late projections in mock drafts stop him from keeping his name in the NBA draft.

Calipari says handshakes may be thing of the past…