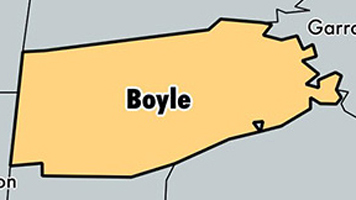 In a letter from Boyle County Attorney Chris Herron given to magistrates before Tuesday’s regular fiscal court meeting, held over the internet, he wrote that during a meeting in January, Shane Baker of WTD requested that the Agriculture District Zoning Ordinance be amended to allow distilled spirit warehouses by right or through a conditional use permit. “Neither option currently exists in the Danville or Boyle County zoning ordinance,” Herron wrote.

He explained that Baker purchased the property late last year “under the assumption the zoning ordinance had been amended. Baker wants to put rickhouses in an agricultural zone,” Herron explained. The “easiest way to accomplish this” is for Baker to apply for a zone change from Agriculture to Industrial. “However, he does not want to go that route. He instead wants a zoning ordinance amendment by Right or by Conditional Use Permit,” Herron wrote.

When County Judge-Executive Howard Hunt opened discussion for the possibility of amending its recently adopted comprehensive zoning ordinances, Magistrate Jason Cullen immediately made a motion to deny WTD’s request. “We have planning and zoning for a reason. There’s no reason for someone to come in the back door of fiscal court and try to have us do the job for planning and zoning, so I’m going to say we’re not making any more amendments to planning and zoning. We spent a good amount of time getting everything in line. I don’t see a need for this,” Cullen said. “I see a need to protect our agriculture areas.”

Plus, Caywood said he was “uncomfortable” with fiscal court telling the P&Z to move forward with amending the zoning request was because, “I want to be sure to always give the public the opportunity to voice their thoughts and their opinions on any zoning change or any agreement that changes the zoning or affects the zoning. … I think that public input is critical and we never would set a precedent that would do away with public input.”

Gay said he was in favor of having a strong P&Z process in the county. “I’m just saying by adding the conditional use permit, you still have a process. We should consider moving forward as we continue to grow in the distillery business.”

Cullen said since the distillery is “doing industrial stuff” then it should have to follow the rules for industrial zoning.

“Why would we make an exception for one part of an industry, where we wouldn’t make it for everyone else? That’s kind of a slippery slope that you’re going down. If we allow this for the distillery, what happens when Denyo or Meggitt wants to come in and make changes?”

Cullen also said during the community’s Smart Growth meeting last year, “We made a pledge to start looking at being smarter about what we were allowing.” Then asked, “Doesn’t it kind of just defeat what we’re trying to do with Smart Growth, by allowing a lot of things to happen when we already have zoning reasons?”

Eventually, Hunt brought Cullen’s initial motion to deny WTD’s request up for a vote since Sammons had earlier seconded. Hunt said the fiscal court’s denial for the text amendment, “Does not address conditional use permits at this time.”