Question: Jerry, what can you tell me about this Chinese platter that I’ve got? I have had it for years and years. It’s in very fine condition. I love the colors. They make me think of autumn. I don’t think I paid much for it, as I rarely ever pay much for decorative things. It lives in my bookcase with my other pretties. Would this have been a whole set? 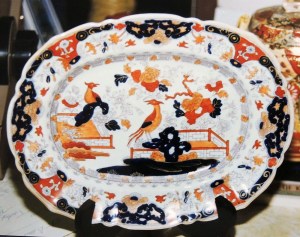 Answer: The platter you have is Japanese and not Chinese. We Westerners, call it Imari ware, but the Japanese would call it, Arita ware. Artia ware are made in the Hizen Province, of Japan.

The Arita kilns have had a fabled and fascinating story. Their earliest wares were far different from what you have, the colors were blue and white and greens, like celadon and the body was pottery. However, in the 16th century when kaolin was discovered it changed everything. Kaolin is a fine grained and textured clay that when refined and cleaned, turns pottery into porcelain. Not quite as simple as that, but you get the

idea. During this period, the quality ran the gamut, from almost primitive to that of royal standards.

It was made in massive quantities in the 17th and 18th centuries but its initial history dates back much further.

Your piece with its gorgeous fall-like colors dates to the 1850s to 1860s timeline. It’s (sort of) loved today by decorators and collectors and it’s paraded out in antiques shows.

Wares like yours were strictly for export and were considered cheap and inferior to pieces that were marketed in Japan. In fact, the Imari style that we are familiar with was heavily influenced by Korean pottery.

Imari was used the same way that canton porcelain was shipped out, as ballast in the ships.

Let’s talk about sets. These early pieces were typically not issued in sets. Maybe plates would match but serving bowls would be different. Now, beginning in the 18th century, with the demands of the European desires being for matching services, Asian potteries obliged. But even then you might have your serving pieces to be in Imari patterns and your place setting pieces might be something different. So it’s a loosey goosey kind of answer, but sometimes they were and sometimes they weren’t issued in sets.

By the time one or two hundred years pass by, all that’s left are loose pieces.

Imari is certainly traditional, and you know how most traditional things are treated in the marketplace — not too well.

department. I think that a platter like yours, and incidentally, this would have been a nesting set of platters, would be priced for about $60 in today’s market. A far cry from the days when this platter would have sold easily for around, $200. Thanks for a great question and for sharing it with us.