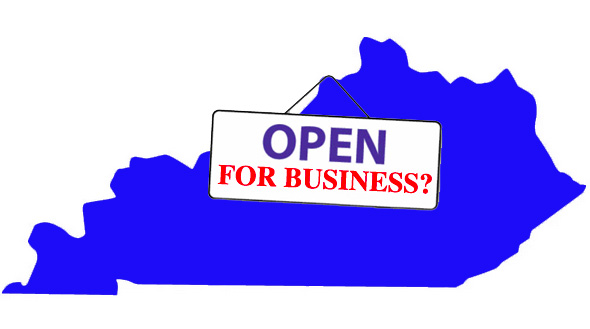 FRANKFORT, Ky. (KT) – Gov. Andy Beshear gave a “concrete plan” as to how Kentucky will reopen during his daily press briefing on Friday.

The governor revealed the seven benchmarks that Kentucky must reach to reopen at least parts of the state’s economy that has been shuttered for about a month. The open is that some positive signs happen maybe before the end of the month.

“We’ve provided as concrete a plan as far as when and how we will reopen as any state has,” he said. “I hope it does give you what we’re looking at, where we need to be. I hope we see the ability to start reopening in some very small ways leading up to May.”

The plan starts with having 14 consecutive days where the coronavirus is in decline. That is a prerequisite that has to be reached before anything else can happen, he said. The White House has a three-phase plan that mirrors much of what Kentucky is doing.

“We are going to work hard to open our economy,” Beshear said. “But we want to make sure we do it smart and do it safely. That’s what everybody out there wants.”

Regardless, it’s going to be a long road. The first phase of reopening, based on guidelines from the White House, have many restrictions. Schools stay closed, groups cannot gather larger than 10, bars stay closed and gyms can open only with social distancing. Large venues could only open if there is social distancing and there are still no outside visits to senior living facilities.

Businesses that can reopen will be restricted too and would have to be able to check the temperatures of customers as they arrive.

Here are the seven benchmarks Beshear and his administration will be looking at when it comes to loosening restrictions.

Number and rate of new cases

Dr. Steven Stack, the commissioner for the state’s Department for Public Health, said “the No. 1 thing we need to see is 14 days of actually coming down. We have to prove we are actually going down.”

Currently, Beshear said, it appears Kentucky is at the top of the curve. “We’ve almost cut the top off that muffin,” he said. “We have to show not that you’re going up or are at a plateau, but that you are truly going down with less cases day after day in an actual trend.”

Stack said Kentucky, like most states, need to drastically improve the testing capacity. He said if Kentucky tested 0.1 percent of the population it would take 13,500 tests per day. They have done about 3,000 per day and 30,000 total.

The tracing contact is going to take additional staff, which Beshear said could be paid for through some of the CARES Act. It’s critical that those who have come in contact with someone who has the virus self-isolates for 14 days to prevent another resurgence, Stack said.

Beshear said there’s a need for PPE not only for health care workers but for hospital patients so they don’t get the virus while being treated for something else.

Every day is a battle to obtain PPE, Beshear said.

“We have to make sure we keep both the health care worker and the patients safe, and the personal protective equipment is the way we do that,” Stack said.

Senior living facilities and prisons are two of the biggest areas of concern. A nursing home in Hopkins County has more than 30 cases and four deaths.

Taking steps to make sure the contacts don’t reach those places where the most vulnerable are living.

Ability to social distance and comply with CDC guidelines

Businesses that will be able to open the fastest are those who can most easily play by the CDC rules, Beshear said.

He is considering ways that specific businesses can best practice social distancing, giving barber shops as an example because of how they could limit customers at a time.

“Our new normal is that we’re going to be able to open faster if they’re strictly able to comply with the CDC guidelines,” Beshear said.

Preparedness for a future spike

Several areas, most recently Japan, plateaued in its number of cases before seeing another spike. If that happens, Beshear said, Kentucky must be ready.

“We want to make sure we don’t have a second peak even though the overall total is lower,” Stack said. “You’ve got to be flexible, got to be fluid. As yo open up you may see spikes, may see changes and you’ve got to be able to respond.”

Status of vaccines and treatments

Of course, as it stands now, there are no vaccines or treatments for the coronavirus. When that happens, Beshear said, is when we get back to something “resembling our old normal.”

But both Stack and Beshear warned that there would never be a complete return to the old normal.

“Normal going forward is not normal going into this,” Stack said. “When we start lifting restrictions, there will be more disease, more people getting infected. The disease will still be with us until we find a vaccine.”

Stack said a vaccine likely won’t be available until 2021.

“I think that if there is not a vaccine this time next year, first of all, the world will be very different,” Beshear said.