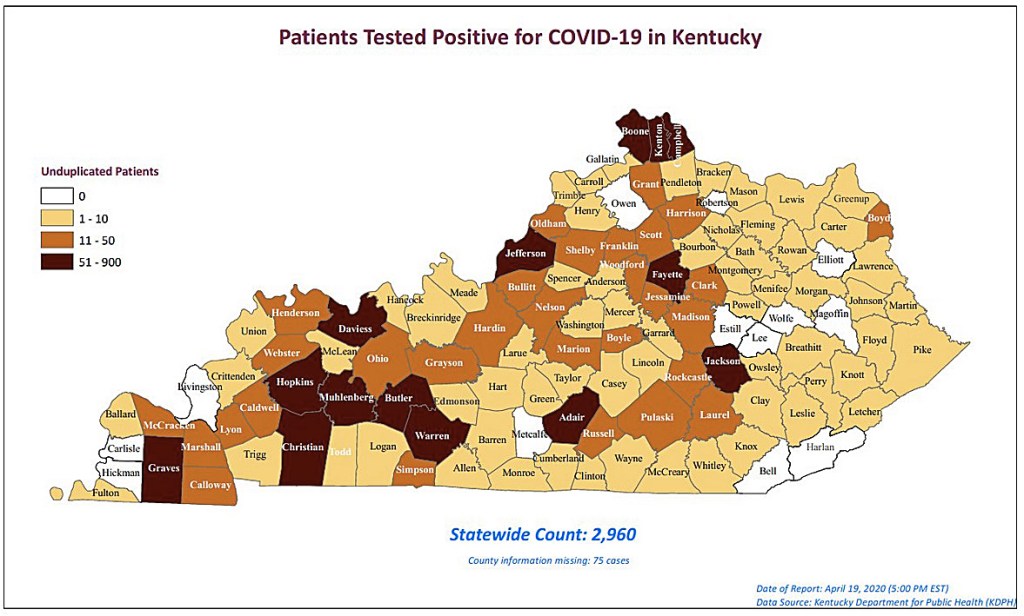 FRANKFORT, Ky. (KT) — Kentucky had its highest single day number of cases of the coronavirus reported on Sunday, with 293, bringing the total to at least 2,960.

There were also four deaths reported Sunday, one each in Graves, Hopkins, Jackson and Jefferson counties. There have now been 148 Kentuckians who have lost their lives due to the pandemic. Nationwide, there have been over 762,000 confirmed cases and more than 40,000 people have died.

According to a map of cases by county, developed by the Kentucky Department for Public Health, there are only 13 of Kentucky’s 120 counties that have not reported a confirmed case of the coronavirus.

During his daily press briefing, Gov. Andy Beshear said despite the record number of single day cases, Kentucky is flattening the curve. “But also know that we’re not in the 14-days of decreases that we talk about that we need under White House guidelines to begin certain things. We are still in the midst of this spike of a dangerous and highly contagious virus.”

He said the number of Kentuckians ever hospitalized due to the virus is 1,011, with the current figure at 265. Of the total hospitalized, 532 were treated in the intensive care unit; currently 149 are in the ICU.

Long term care facilities, such as nursing homes, continue to be hit hard, with 46 reporting positive tests for the coronavirus. New cases reported on Sunday include 33 residents, eight staff members and four more deaths. The totals have now risen to 386 residents, 172 staff and 50 deaths, 49 of which are residents.

Public Health Commissioner Dr. Steven Stack said Japan’s trajectory is one reason why the state will follow the White House guidelines in gradually reducing some of the restrictions.

“Japan, unfortunately, is having a resurgence right now,” he stated. “That is something we have to work very, very hard to avoid.”

Beshear was also asked if there is any update on how the primary election, which has been delayed a month until June 23.

“Not at this time, but my position certainly hasn’t changed,” he replied. At this time, it would not be safe for our poll workers or those going in to vote to do it in the traditional way.”

He added, his office is working with the State Board of Elections and the Secretary of State’s office to find the best path forward.

Beshear gives 7 benchmarks on what it will take…