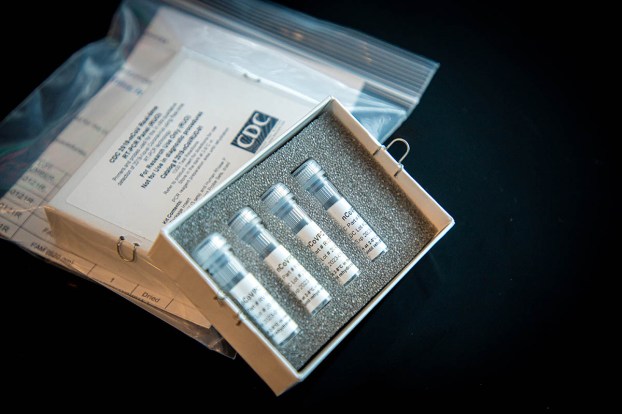 Danville schools may be testing site for virus

As more testing for COVID-19 becomes available in Kentucky, the Boyle County Board of Education is prepared to join the effort to fight the disease. Although not formally requested to become a testing site at this time, the board voted to serve as a testing site if needed.

Danville-Boyle County Emergency Management Director Mike Wilder said paperwork had to be submitted in preparation for the potential need for a local testing site, and the action taken by the board at its Thursday online meeting was simply providing approval of its property as a site if that became necessary.

Boyle County Schools Superintendent Mike LaFavers said he expects to get news of the county being needed as a testing center.

“The governor announced four sites today [Thursday],” LaFavers said during Thursday’s online board meeting. “And we weren’t one of them. I think we will soon be one of the sites he announces, maybe in the next couple weeks.”

Gov. Andy Beshear announced that drive-thru testing would be available for individuals with symptoms on Tuesday, Wednesday, and Thursday of this week in Madisonville, Paducah, Somerset, and Pikeville. The goal, Beshear said, is to test approximately 330 people per day.

Boyle County Schools Assistant Superintendent/Director of Pupil Personnel Chris Holderman has been involved in conversations about the testing and told the board that he expects testing to last approximately three days and will likely occur from 8 a.m. to 5 p.m. each day if and when it begins.

Testing will occur behind Boyle County High School, with individuals entering the campus by the fairgrounds, according to LaFavers. There is also an alternate site for testing along the same path.

LaFavers told the board that they have the ability to decide which site they preferred for the testing, but board chair Jennifer Newby said it would probably be better to let the governor’s office and Kentucky National Guard decide which testing site would be best.

In other news from Thursday night’s meeting, LaFavers told the board during a discussion regarding the school calendar that he will be on a conference call with Beshear, along with other school district superintendents from across the state, in which he anticipates Beshear will recommend that schools in Kentucky be closed for the remainder of the school year.

On Monday afternoon Gov. Beshear announced that schools should not reopen for the remainder of the school year. The plan had been that Boyle schools would be closed until May 1, then go back into session for two weeks until the last day of school for students, which is scheduled for May 15.

The board also discussed waiving preschool tuition for approximately 35 students. Preschool Director Jenna Blair said the tuition would be waived for the time period of April 13 to May 14.

“We have a lot of parents who are in a unique situation because a lot of our students qualify for preschool for a half day and they qualify either through an at-risk situation or speech services or occupational therapy services,” Blair said. “We actually provide the services regardless, but they pay for a full day so they pay for that extended day that they’re not actually getting right now.”

Blair said she has had several parents reach out because they lost their jobs and said she doesn’t want to completely lose those students.

“Instead of losing those students and parents taking them out because they don’t fall under compulsory attendance requirements… I feel like we would be doing the students a disservice because I don’t want to lose that connectedness between the students, the family, and the school. This is such an important time for students who are entering kindergarten right now.”

Blair said they are still providing instructional components, and the teachers are still working with students for academic purposes and doing Zoom hangouts with them.

“I just want to make sure we are staying connected with these families to make sure they have the food that they need and that social and emotional support, and the academic support as well,” Blair said.

The hit to the budget would be approximately $12,740, Blair told the board. The board unanimously approved the motion to waive tuition.

Other board meeting notes:

“When we first started talking about this two years ago, I’m not even sure this technology existed,” LaFavers said. “But it does now. It really improves the safety because you’ll know if your doors are breached at any point in the day… It’s a pretty important piece of any safety plan.”

The board unanimously approved the bid from Schiller for $98,550.

STAFF REPORT A Lancaster man was arrested on DUI and other charges following a Sunday morning collision in Danville. Michael... read more