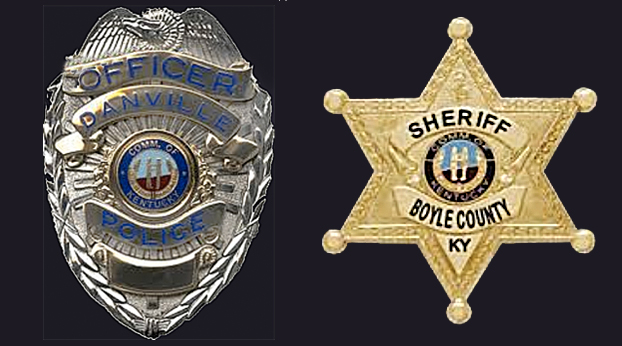 With businesses closed and most people staying home during the COVID-19 crisis, you might think crime would decrease in Danville and Boyle County, but local law enforcement officials say that’s not the case.

Boyle County Sheriff Derek Robbins said his office has seen crime increase in recent weeks, despite a drop when the pandemic first began.

“It was quiet for the first couple of weeks of this, but now we’re seeing a really large uptick in thefts, burglaries, thefts from vehicles, and vehicle thefts themselves are up quite a bit,” Robbins said Friday.

Deputies were busy recently recovering a stolen truck from Boyle County that was recovered in Lincoln County. Robbins said two arrests were made in the case, and the suspects were no strangers to law enforcement. He said both suspects had warrants for their arrest in relation to prior theft charges.

“I think it’s a mixture of people getting tired of staying at home and looking to get out of the house. There have been a lot of people that have been released for similar charges, and we’re finding that the people we are catching who are stealing things are out on theft charges themselves,” Robbins said. “There are a lot of crimes of opportunity. That’s just the way it is right now.”

Not only does Robbins see crime up from the early stages of the coronavirus pandemic, but he said numbers are higher than normal.

“It seems like our thefts are up from where it was before this even started,” he added.

Danville Police Chief Tony Gray said there has been a decrease in some crimes while others have increased.

“We have seen an increase in domestics, and it appears theft is up a little bit,” Gray said. He added that with some stores being closed during the pandemic, he believes theft may be a little higher if others were open.

One area where Gray said he has seen a decrease is traffic accidents.

“We’ve had a very sharp decrease in traffic accidents. We usually run somewhere around 80 accidents a month, and we were at 51 last month,” he said.

Members of the police department and sheriff’s office have important and potentially dangerous jobs to do, but they are approaching those a little differently, especially in terms of safety. Gray said his officers are patrolling, but not being as proactive for traffic infractions. He said a driver committing a minor infraction would be handled differently than more serious issues.

When they do make a traffic stop, Gray said officers are using extra caution. They are equipped with personal protective equipment including masks and gloves to protect themselves and the citizens with whom they come in contact. Still, things happen that can pose threats to officers’ safety.

“Last week we had an incident where we were dealing with a gentleman who had a test for COVID earlier that day, and he was a little distraught,” Gray said. “We had to deal with him in a very minor altercation, but still, we had to send three officers home to self quarantine until we got those results back. The results were negative and the officers were cleared after a couple of days.”

“We’re maintaining our distance from the windows and limiting our amount of time we’re having contact with people,” Robbins said. “But we really haven’t changed how we’re policing. If it’s a call, we try to limit the number of people involved in it.”

He said none of his staff has been exposed to the virus and none have had to quarantine as a safety measure at this time.

“No staff has been exposed and had to be off, but we have some plans in place, and it’s probably just a matter of time until that happens,” he said. “When you’re dealing with the public and have more contacts than the normal person does, at some point you may come in contact with somebody that has the virus or has had the virus, and that could require us to quarantine one of our guys. So we’re making allowances for that if it happens, to make sure our shifts are covered.”

Robbins said his office is operating at full staff, which includes 10 deputies on patrol, in addition to office and administrative staff, court security deputies and school resource officers. He said those deputies are “helping out quite a bit” since court and schools have not been in session.

“We’re still trying to do our patrols as normal, but it’s hard to do routine patrols when you’re so call driven. We’re trying to increase our patrols, which is a double-edged sword because we’re over our fuel budget. So you’re trying to balance public safety with operating within financial guidelines. Times are different right now. It’s a tough time for everybody,” Robbins said.

When at full staff, Gray said his department has about 36 police officers. Currently the department is short by about five officers, which is not good, but it is softening things in terms of the department’s budget. He has some people who were scheduled to go to the police academy, but said they are not considered at patrol strength at this time.

“With our budget, we’re very well in where we need to be at this time of year, but I would say most of that is attributed to our staffing,” Gray said. With a full staff, with more officers on patrol and more vehicles on the road, the department’s expenses would likely be higher than than are currently, he added.

“We always put out warnings about making sure you lock your vehicles, keep your valuables out of sight, don’t leave valuables in your vehicle. It seems like that needs to be put out there now. This community is pretty safe, and people leave their vehicles unlocked at night,” he said, adding that some of the vehicle thefts his department has handled lately have even had the keys inside when the vehicles were stolen.

“Don’t leave anything in the car, especially in plain view. If you see a purse sitting in the front seat at 2 in the morning, it’s a really easy target,” Robbins said. “Make sure you’re locking your cars and taking your valuables in. If you see a vehicle that looks suspicious, going slow, or looks out of place, if something is telling you it’s out of place, it probably is, so call and we’ll try to get somebody out there to look and at least be present in that area to deter any thefts, even if we can’t catch them.”